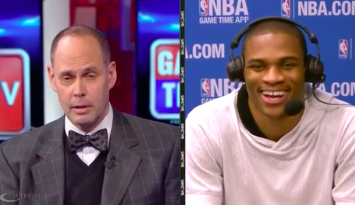 OKC Thunder point guard Russell Westbrook is doing his best Marshawn Lynch impersonation and giving the silent treatment to the local media.  After a triple double in a victory earlier this week, Westbrook refused to answer questions beyond “we executed well.”

So after a victory over the Heat last night, Westbrook sat down with Ernie Johnson at NBATV.  Because he’s a clever genius, EJ finished the interview asking about the team’s execution.  He even got Russ to smile!  See, he must not hate all media!