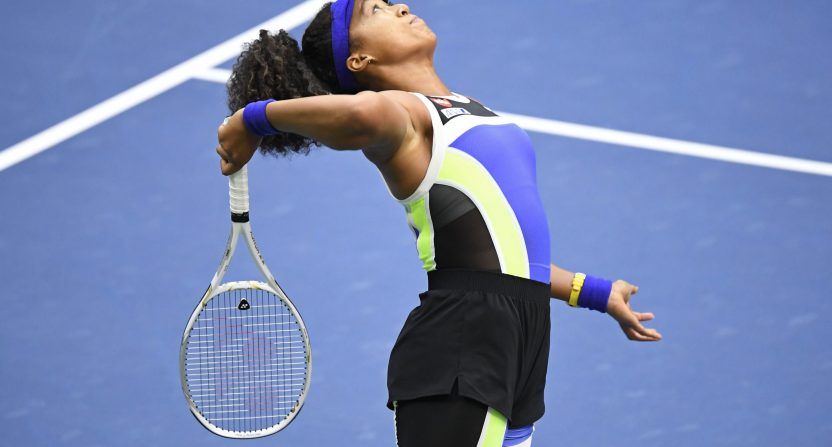 The idea of accredited members of the media interviewing players or coaches after games dates back more than a century, but it’s come under some fire recently. And some athletes have chosen not to participate even if they’ll be fined for that stance, most recently Kyrie Irving of the Brooklyn Nets. The latest to take that approach is tennis star Naomi Osaka (seen above at the U.S. Open last September), who tweeted Wednesday that she’ll not participate in any press conferences or interviews during the French Open (the main draw takes place Thursday night):

Here’s the part of that statement cut off by the embed:

“However, if the organizations think that they can just keep saying ‘do press or you’re going to be fined’ and continue to ignore the mental health of the athletes that are the centerpiece of their cooperation [sic] then I just gotta laugh. Anyway I hope that the considerable amount I get fined for this will go toward a mental health charity. XOXO”

As Tumaini Carayol of The Guardian noted on Twitter, the fines here can go up to $20,000 for missing a press conference at a Grand Slam event like the French Open. And in men’s tennis, Novak Djokovic was recently fined $7,500 for skipping a press conference after his U.S. Open disqualification. So this could come with a significant price tag for Osaka.

As with Irving, it’s certainly possible for Osaka to choose not to interact with the media and to accept the fines for violating tournament/WTA policies along those lines. That’s a choice athletes can make. But this situation is interesting for Osaka going beyond that, especially with her claiming that answering questions from the media is negative for her mental health, and with the specific examples she cites there being just athletes “asked questions we’ve been asked multiple times before” and “asked questions that bring doubt into our minds.”

Neither of those really seems like inappropriate behavior, or like any sort of assault on athletes’ mental health. It would be a strange world if journalists couldn’t ask questions that “bring doubt into athletes’ minds”; that would seem to restrict the approved topics to the likes of “So, Naomi, how awesome are you going to be today?” And it’s also certainly notable to see an athlete who’s featured in an upcoming Netflix documentary series come out with these kinds of criticisms for the media, and that says a whole lot (and none of it good) about what that series will look like.

Beyond that, this is interesting for Osaka launching an assault on the generally-accepted media policy of “players should talk to the press,” and saying that those policies are evidence that these tournaments “continue to ignore the mental health of the athletes that are the centerpiece of their cooperation” (she presumably means “competition”).  They don’t seem to be, really. Participating in press conferences, even after a loss, seems to be working just fine for most athletes. And there can be value there for the athletes in getting their side of the story across. Of course, that matters a lot less in an era where it’s easy to put that story out yourself exactly the way you want on social media, or through friendly media appearances, or through your own Netflix series.

Regardless of if press conferences are universally good for athletes or not in this day and age, there certainly seems to be value there for the leagues or tournaments in promoting their event. If these events suddenly completely removed the fines for skipping media availabilities, that might lead to significantly fewer athletes actually talking to media. That might in turn lead to lessened event coverage, and possibly lower event popularity, and possibly lower ratings, and possibly less TV money.

None of that’s a sure thing, of course, and little is likely to change with just one player boycotting. But if those “talk or get fined” policies were removed, that might mean a whole lot of players wouldn’t talk. And it’s definitely possible to envision that leading to a world where certain events get less interest and less TV money from broadcasters. And it’s hard to see these tournaments and organizations going down that road just in response to a bunch of very vague complaints from Osaka about repetitive questions and questions that “bring doubt.”

And that’s a notable part of this. Absolutely, there’s bad media behavior out there. And that’s why leagues and events limit who they accredit, and why organizations of reporters for particular sports exist. There are all sorts of methods out there for athletes or organizers to take issue with particular members of the media, whether publicly or privately, and many of those often produce results. And that would seem a lot better in this particular case; if there are particular media members and particular questions Osaka has issues with, bring them up, either by discussing that with tournament officials, or with their organizations’ leadership, or even with putting those people on blast publicly. That would make a lot more sense than these vague comments about the media as a whole.

Overall, though, there’s already a path here for Osaka to take. If talking to the media is so objectionable to her, she’s perfectly welcome to skip these press sessions; she’ll just face a fine for doing so. Or if the fine really bothers her that much, there’s always the Marshawn Lynch approach of showing up and only answering “I’m just here so I don’t get fined.” No one’s telling her she has to actually answer questions, and no one’s even telling her she has to attend press conferences; she’s welcome to just pay the fines for skipping them. But her complaints about this as proof that sports organizations “continue to ignore the mental health of the athletes that are the centerpiece of their cooperation” feel a bit much.