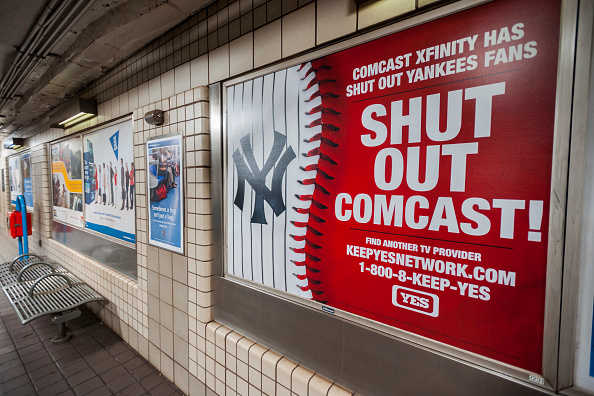 I’m pretty sure I shared the same amount of anxiety — possibly more — than most Charter households who almost lost Bravo TV this past fall/winter. I don’t know what I’d do without Erika Jayne or Teresa Guidice in my living room.

How many times have you seen the threatening scrolls on your televisions? It’s usually right before a big sporting event, season premiere, etc. Your provider is blaming the network, the network blaming the provider. So who’s wrong? What are they fighting about? As the distribution business has evolved, so have the contracts and so have the issues. Here’s why mom and dad are fighting and you’re once again stuck in the middle.

Networks are pretty clever. If you’re one of the AT&T customers who got blacked out of the beginning of March Madness this year, you were pretty angry. Networks do this to apply pressure on your provider to get the channel back on the air. Leverage is a great thing. Most networks structure their agreements around big dates depending on the network. Most regional sports contracts, for example, expire at the end of summer/ early fall due to football (SEC Network, Big Ten Network).

Even entertainment nets like AMC end before big premieres. Remember the big feud between Dish and AMC? You couldn’t miss the ads during the Walking Dead and Mad Men. Networks also try not to have all of their agreements with large providers end all at the same time, either. What leverage would CBS have if they had their AT&T contract, Dish Network and Comcast up on same date, affecting all of those households before March Madness? Not much.

Providers are starting to take a stand, though. Comcast dropped YES Network back in the fall of 2015, and missed the entire Yankees 2016 season. While the fight got heated, and even involved Alex Rodriguez, Comcast waited out the storm. With as many subscribers as Comcast has in that area (around 900,000 reported) the financial loss from that revenue can leave a significant dent. Had the Yankees (or even the Nets) had a better season, it may have been a different story. More often than you would believe, I had providers tell me they think they should pay a sub fee based on a professional team’s performance each season.

If providers had their choice, the most expensive networks would be available a la carte. The next best thing: on a tier, where they can charge more to the consumer, and only the consumers that want that content would pay for it. Ideally the most expensive channels (sports, mostly) would be on these tiers. But, that’s not where the money is made. The more subscribers, the more revenue. Providers fight this with networks, and networks have been able to stand firm at least when it comes to certain content, like sports. The issue these days is that every network across all genres feel they deserve to be on the highest penetrated tier. It’s starting to overwhelm most providers, especially the ones who have restrictions on bandwidth.

This issue has only gotten larger when schools are added to conferences. Does the whole state of New Jersey care about Rutgers football? Doubtful. But the whole Garden State is going to see Coach Ash and his 88th-ranked (at best) football team. It’s all or nothing.

By far the most obvious and the most popular reason contract disputes happen is cost. While we know networks have overpaid for rights for sports content, they assume they can make it up with increasing the subscriber fees. Sometimes these increases can be up to 50-60%, which is astronomical, and not budgeted. When this can’t be resolved, the marketing wars start, and they can get very heated. When dealing with a really large family of networks, there is no real ceiling when it comes to what type of leverage will be used. Do you think YES Network was the only piece of business affected during the fight with Comcast and FOX?

Cost is also why many independent providers are no longer in business, or merging. DirecTV and AT&T needed each other in this instance. Not only did it benefit them to do this from a business standpoint to offer a full slate of products, but AT&T reaches less homes than DirecTV did. Basically, the more homes a network has, the better price they get on a per sub fee. Once the merger happened, they have been pushing their customers to the DirecTV platform. By doing this, the subscriber count stays the same, and they are able to pay less per sub to the Networks. Therefore, saving money.

You end up having a few different options if you find yourself in the middle of the battle and in desperate need of The Real Housewives (like me). You can always switch providers if you’re not in a contract. Or, you can call your provider and ask for a refund while the dispute continues. Depending on the rep you’re talking to, I’ve gotten back $15 per month when I lost a regional sports network, until it came back on. That’s a decent bottle of wine right there.

Rarely does a fight go on that the channel never makes it back on air. It’s harder to lose a channel than it is to never have launched it. Providers are like my exes; they always come back.