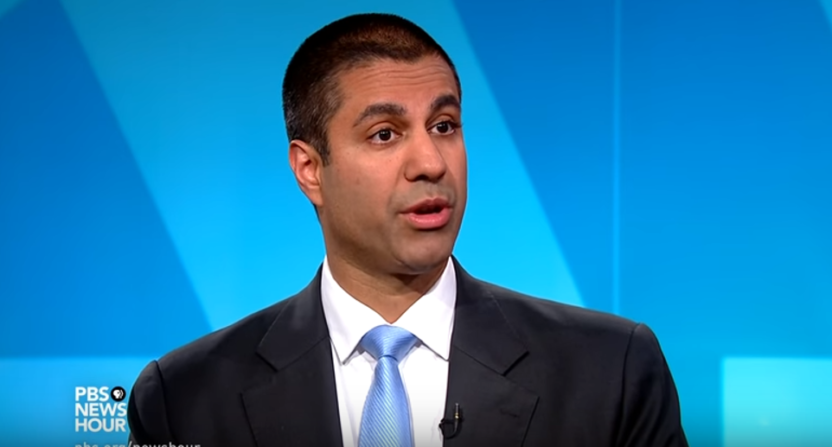 The new proposal from Federal Communications Commission chairman Ajit Pai (seen above in an April PBS clip) to dismantle net neutrality regulations that require internet service providers to treat all content equally is receiving wide discussion for its potential effects on entertainment services such as Netflix and Amazon Prime Video, but it could also carry massive implications for the sports world on a number of fronts.

In particular, ISP moves that would become allowable (as long as they’re disclosed) to charge extra or slow down speeds for particular kinds of content and/or favor in-house content could affect everything from ESPN to NBC to Turner.

One of the most obvious impacts could be for Disney’s planned ESPN Plus over-the-top service. ESPN Plus and the Disney/Marvel/Star Wars streaming OTT service to follow are vital to that company’s plans, with Disney CEO Bob Iger calling the creation of direct-to-consumer relationships “our highest priority this year” on this month’s Q4 earnings call.

ESPN Plus (and the yet-to-be-named Disney streaming service) face the same sorts of issues as Netflix and Amazon in a deregulated environment; streaming video consumes a lot of data, and in the absence of net neutrality regulations, some ISPs may charge consumers more for particular services, slow down those services’ content, or require those services to pay for “fast lanes” (costs that could then be passed on to consumers in price hikes).

This is perhaps even more of a concern for ESPN Plus than for entertainment-focused services. It’s not entirely clear exactly what will be on ESPN Plus at the moment, but any big sporting event can see a lot of people trying to watch the stream at once, which creates technical challenges as it is. If that content can be treated differently from the rest of the internet, that opens ways for ISPs to perhaps charge more for trying to watch it. And that may not relate just to OTT sports services; it could also apply to authenticated login streaming of big events like the Super Bowl.

It’s worth noting that ESPN Plus wouldn’t necessarily be a victim, though. Something it has on its side is Disney’s massive corporate backing, and that could allow it to strike some favorable deals that smaller companies couldn’t. Similarly, while Netflix has taken public stands in favor of net neutrality both Tuesday and in June, CEO Reed Hastings described the net neutrality fight as “not our primary battle” in May, saying “We think net neutrality is incredibly important… [but it’s] not narrowly important to us because we’re big enough to get the deals we want.”

Disney certainly meets that qualification as well, and in a deregulated environment, it’s also possible that they could make deals to have the likes of ESPN Plus content favored by certain ISPs over other streaming video content.

But this could mean that ESPN Plus winds up in the internet equivalent of pay-TV carriage disputes, where it works well on some providers but carries an extra price tag or is slowed on others. And not all providers are available to all consumers. So it would seem likely that a deregulated internet would probably be more negative than positive for ESPN Plus overall; they might be able to strike some deals and get some favorable treatment, but that usually comes with a cost, and they would probably run into some less-than-favorable treatment that could reduce their potential subscriber pool.

There are big potential impacts here beyond just OTT services, too, especially when it comes to provider-owned broadcasters. At the moment, that’s mostly NBC Universal (owned by Comcast), but it could soon include some Fox assets (which Comcast is reportedly now chasing) and Turner (which is part of Time Warner, which AT&T is trying to buy; however, a Department of Justice lawsuit is throwing up roadblocks there).

Under pure net neutrality, Comcast has to treat NBC streaming content the same as streaming content from ESPN or anyone else; in its absence, they could favor content from their owned properties. And that’s not just about video, either; what if Comcast made it so NBCSports.com loads much faster than ESPN.com, or doesn’t count against internet data caps? What if AT&T bought Turner and suddenly made it much easier to read Bleacher Report than ESPN.com?

Under these plans, there are plenty of possible advantages for broadcasters and content creators owned by providers, and significant possible pitfalls for those who aren’t owned by companies that offer internet service.

But without net neutrality, ISPs seem likely to find ways to favor their own streaming video services and limit those from rivals.

In fact, they already have. One of Pai’s first moves as FCC chairman back in February was to get rid of punishments for “zero rating,” letting companies like AT&T offer DirecTV Now streaming that didn’t count against data caps. (If you want a rival service, that of course counts.)

That was the other side of this, the carrot rather than the stick, but it’s still a blow against true neutrality and a way to favor affiliated services. And rolling back restrictions further seems likely to enhance that emphasis on favoring in-house products, and that could be quite bad for the services not affiliated with providers, as Steven J. Vaughan-Nichols wrote at ZDNet back in April:

In a world without net neutrality, your ISP may offer one video service for free while charging for Netflix, which eventually means you pay more. Oh wait, Comcast, among others, already tried that trick in 2014. In 2017, the ISPs will get away with it.

This is capitalism 101. In the short term, it makes sense for AT&T to have its own internet TV network. It will be the same for the other ISPs. In the long run, they’ll all end up facing ticked off customers, but when do companies look beyond the next quarter these days?

Soon, you’ll have little choice but to subscribe to the internet TV package your ISP offers. Not only will it be the only thing you can afford, but your ISP may refuse to allow you to watch another. Take, for example, Charter Spectrum. At the moment, Charter is fighting with Fox. The upshot is Fox doesn’t want to pay more for its TV channels to be carried on Charter’s TV cable offerings. What’s to stop this from happening on the post-net-neutrality internet? Nothing.

So, that seems particularly bad for the streaming products like PlayStation Vue and YouTube TV that aren’t directly tied to providers. And it also may lead to more people just keeping cable; if the OTT options become more limited based on your ISP, it may work out better to stick with traditional pay-TV rather than going to an OTT service. This may also further the push for scale and for internet firms to own content, and that kind of vertical integration can carry some potential problems for consumers:

Of course, this proposal would only allow ISPs to favor content, not require them to, and it’s far from certain that all ISPs would. In fact, there might even be competitive reasons for some ISPs to still offer a service that meets net-neutrality standards. But if this passes, it seems likely that at least some providers would do some of the content-favoring that would be allowed in a deregulated environment. That could have major consequences for the sports world.