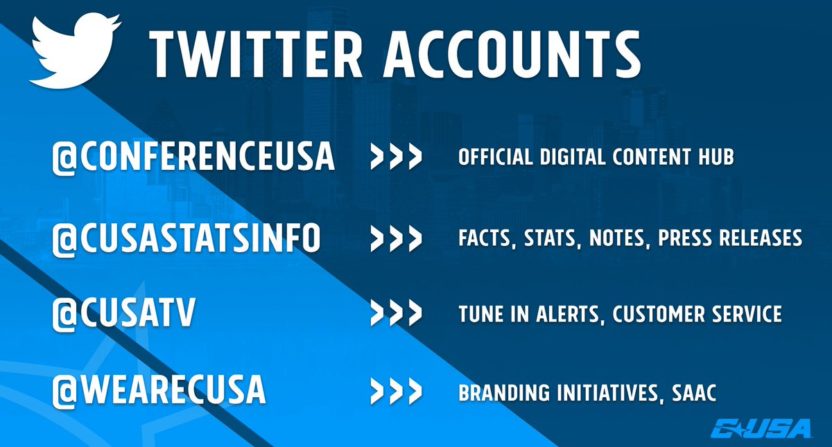 We wrote in March about how Sinclair’s American Sports Network was ending its operations, in April about how it, 120 Sports and Silver Chalice/Campus Insiders were being rolled into a new venture called Stadium, and earlier this month about how Stadium would be streaming its content on Twitter 24/7 for free as part of the tech company’s sports streaming plans. Now, we’re starting to see how that will impact the leagues the American Sports Network had deals with, and it may mean greater exposure for them. One key one is Conference USA football. Harry Minium of the Norfolk Virginian-Pilot writes that C-USA games will get wider distribution from being aired on Twitter as well as local stations this fall, and that Stadium is interested in broadcasting the conference beyond the contract’s expiration in 2018:

Adam Anshell, vice president of sports properties for STADIUM, said that contrary to media reports, STADIUM may televise Conference USA football and basketball after its contract with the league expires in 2018.

“We’re very interested” in discussing a new contract with Conference USA, said Anshell, who is attending league meetings this week in Destin, Fla. …

Games will continue to be broadcast over ASN’s over-the-air and cable outlets, including WTVZ-TV in Norfolk, but also streamed on Twitter, Anshell said.

Twitter would be a new platform for Conference USA that would increase the potential audience. It is usually accessed on smart phones, but can also been seen on computers and tablets and streamed to a television. Unlike cable broadcasts, Twitter is free.

STADIUM’s interest in continuing its relationship could be a huge boost for the league. ASN has been a major player in televising league games the last three seasons.

This is notable on a few fronts. For one, it shows that a lot of the leagues ASN had contracts with may both keep that exposure and then gain some added exposure from Twitter, and for two, it suggests that Stadium will be a player for rights going forward, not just run out the clock on the old ASN/Campus Insiders contracts. They may not bid on everything ASN had (C-USA football was one of its better properties), but they definitely have some interest in picking up live rights.

That could make a big difference for C-USA, too. The conference was already facing a financial crunch under the old system, with its rights package dropping to an estimated $200,000 per school versus $1.1 million per school when deals were signed last year (as per Minium), and those numbers could have gotten really bleak if ASN had gone away altogether. But with it still around as Stadium and still interested in future CUSA rights, that means things are at least equal to where they were last spring.

The state of the C-USA rights may even be slightly better than it was. Stadium has access to some deeper pockets and some outlets that prioritize sports more, thanks to Silver Chalice and 120 Sports and thanks to its deals with Twitter. Minium’s piece notes that C-USA is expected to renegotiate its deals with ESPN, CBSSN and Stadium this spring, and that may lead to better rights payouts. At any rate, the continued involvement of ASN/Stadium seems good for the league, as does the news that many of its games will be shown on Twitter. We’ll see how it plays out, but this is important both for C-USA in particular and in the wider scheme of tech companies getting into streaming sports.