There’s a fascinating saga around how Qatar was awarded the 2022 FIFA World Cup in 2010 and then kept it despite discussion of bribes, forced labor and deaths, media censorship, and an incredibly costly shift to the fall. One new dimension of that saga came to light Wednesday with a detailed report from Switzerland’s SRF News saying that Qatar hired ex-CIA operative Kevin Chalker’s “Global Risk Advisors” firm for “predictive intelligence” on FIFA officials who would try to move the World Cup from the country, with their predictive intelligence efforts allegedly including computer hacking through intermediaries. Tariq Panja of The New York Times shared the English-language version of the report Wednesday:

English version of what is an incredibly detailed story based on primary documents. But sadly no surprise given everything that's happened: https://t.co/dz4u4Js4Rn

Here’s a key part of that report on what it shows:

An investigation by Swiss media SRF’s investigative team, “SRF Investigativ”, shows the details of how the state of Qatar had officials of world football spied on. And how critics of the upcoming World Cup outside of FIFA were targeted as well.

The ultimate goal of those efforts: to prevent Qatar from losing the World Cup bid after massive criticism was raised, when FIFA awarded the tournament to the authoritarian country in 2010.

The scale of the espionage activities is considerable. One sub-operation alone involved the planned deployment of at least 66 operatives over nine years. The budget amounted to $387 million. And the activities spanned five continents.

…According to documents reviewed by SRF, the then heir to the throne and current Emir Tamim bin Hamad Al-Thani personally ordered the obtainment of detailed phone and SMS records of several members of the FIFA Executive Committee prior to the awarding of the World Cup.

The SRF report goes on to cite several specific operations, including spyware attacks against Peter Hargitay (an advisor to then-FIFA president Sepp Blatter) and a successful hacking of the computer of former U.S. Soccer Federation president Sunil Gulati (which obtained plenty of confidential documents, including the full employment contract of then-USMNT coach Bob Bradley). It also mentions a successful email account duplication against the media spokeswoman for the general secretary of the International Trade Union Federation, and a subversion of the network of people around former German Football Federation president Theo Zwanziger.

While SRF doesn’t have definitive links from GRA to those incidents (their more direct links are to Indian company Appian Security, which they claim was linked to a “hacking for hire” setup), they do include documented GRA plans of action that would seem to include “predictive intelligence” efforts like these. And they say these plans were presented to Qatar by GRA, approved, and paid for. Here are three key slides from a 2013 GRA “Project Merciless” presentation they cite: 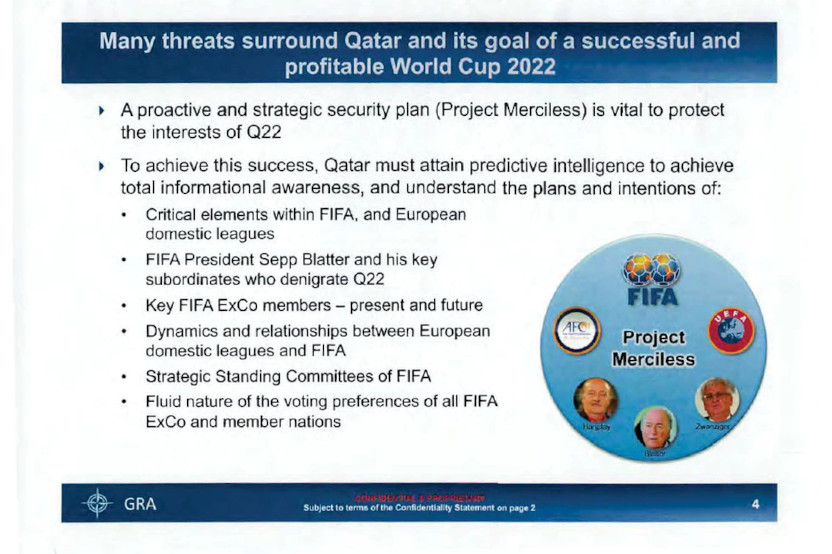 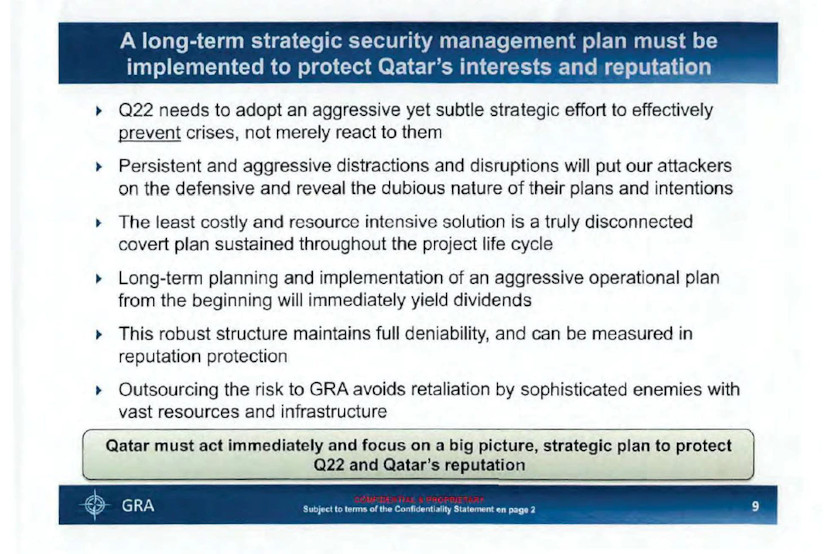 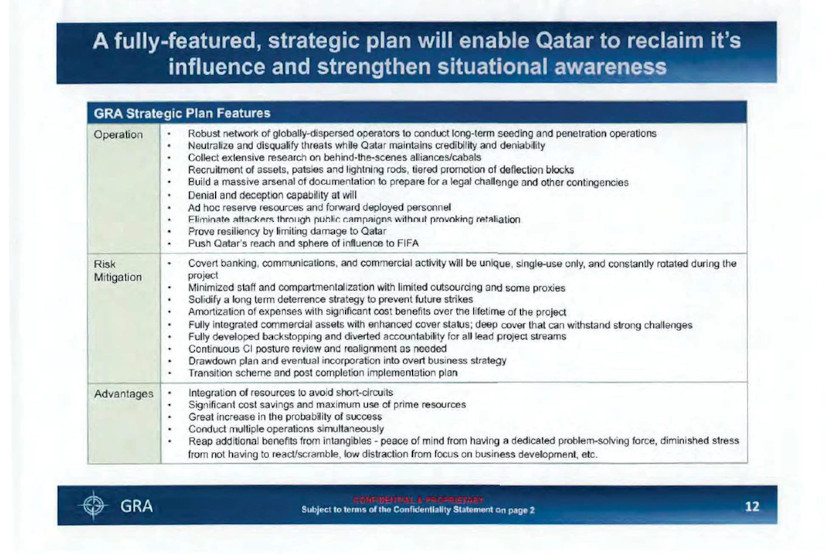 Paying for lobbying isn’t uncommon, and isn’t necessarily illegal (but can be, depending on how it’s registered). Paying for hacking goes well beyond that, though. And these are serious claims against Qatar, adding to the many other serious claims against them (which have been and are being covered by various media outlets, but not official U.S. English-language broadcaster Fox). For his part,  GRA founder Chalker issued some denials to SRF:

A lawyer for Chalker denied all allegations when reached for comment by SRF: “Global Risk Advisors and Mr. Chalker know nothing about these purported new hacks or the other misconduct suggested in your inquiry, and certainly did not participate in them in any way.” Further, “You claim to have documents from GRA to support some of the false accusations. To the extent you actually have any documents, as a journalist you should challenge their authenticity”.

SRF employed a number of measures to verify the authenticity of the documents. Chalker offered no comment on specific questions regarding the nature of the role he played in Qatar.

As for comment from the Qatari government, SRF included this:

Neither the Qatari embassy in Bern nor the Government Communications Office in Doha responded to various information requests by SRF. Shortly after the requests, the Emir held a speech in the Consultative Assembly of Qatar, a kind of parliament without power, in which he mentioned that Qatar had become the victim of an “unprecedented campaign” after the country was picked as host for the World Cup. He said: “It soon became clear to us that the campaign continues, expands and includes fabrications and double standards, until it reached an amount of ferocity that made many wonder, unfortunately, about the real reasons and motives behind this campaign.”

The World Cup obviously is not going to be pulled from Qatar at this point, so the goal of keeping it there was certainly met, regardless of if these specific efforts worked or not. And it doesn’t look terribly likely that there’s going to be much further legal action against Qatar over even hacking claims of this nature. (This also is not the first time Qatar has been tied to spyware.) But this is still a valuable report. It doesn’t necessarily definitively link Qatar to any of these hacking claims (which shows the advantages of using intermediaries who then have their own intermediaries), but it adds to the discussion around this World Cup, and it perhaps provides useful information for the future on what nations may do to try and win international sports officials to their causes.