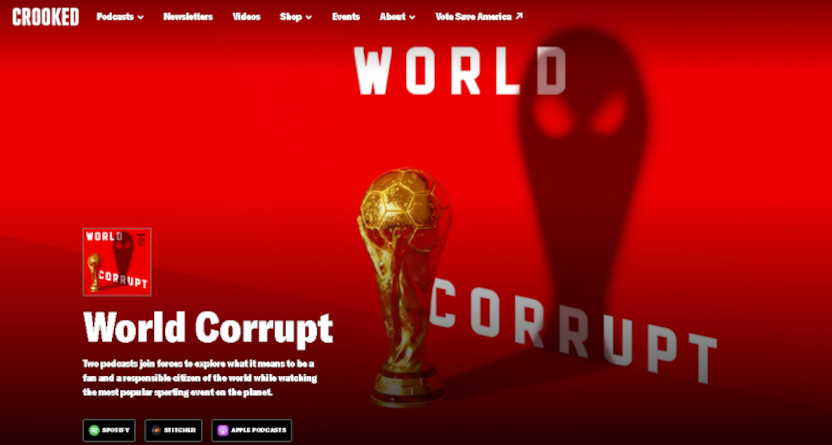 The 2022 FIFA World Cup in Qatar this November is going to have a lot of off-field discussion. Topics there include how that country got hosting rights (and got the tournament to shift dates to the fall), how various broadcasters got event rights, the conditions that have existed there for the migrant workers who built the stadiums (with some dying in the process) and other facilities, the country’s record on human rights, suppression of journalism, alleged financing of terrorism, and more. And a new six-part podcast series hosted by Men in Blazers‘ Roger Bennett and Crooked Media’s Tommy Vietor (Pod Save America, Pod Save The World) sounds like it will cover a lot of that. Here’s a trailer for the series that was released Friday:

AndrewBucholtz · A trailer for Men In Blazers/Crooked Media’s “World Corrupt.”

One key early part of that intro: “But before a ball has been kicked, this gathering of the beautiful game already wears a heinous scar. The tournament was awarded corruptly, to a country with a shocking human rights record, where a reported 6,500 migrant workers have died building the competition’s infrastructure. From Men in Blazers and Crooked Media, World Corrupt is a six-part series hosted by Tommy Vietor and Roger Bennett that takes an honest look at the humanitarian and global impact of the 2022 World Cup.”

Vietor then says “We have joined forces to create a special six-part podcast series exploring the intersection of two of our great passions, politics (Bennett interjects ‘And football!’), and to come to terms with the fact that this year’s World Cup, the biggest event for the biggest sport on the planet, is soaked in blood.” Bennett then says “And to understand how sports are used by autocratic governments to burnish their reputations and distract us from human rights abuses and all that corruption happening just off the field. …What we hope to do in this series is explore how this very World Cup was awarded in the first place, what Qatar hopes to gain from it, and ultimately, how we as fans who use sports as an emotional release from a world that’s too often dark and full of terrors, how we can watch, but also push to make things better.”

The trailer then goes on to discuss some of those featured as interviews in the series. That includes a Department of Justice official who calls the 2022 bidding “the most corrupt thing I’ve ever seen in my career, and I spent a couple of years working in New Jersey politics,’ and U.S. women’s national team star Megan Rapinoe, who says “The regret of not saying anything is what’s going to kill you and what’s going to eat you alive.”

Here’s more from a release on the podcast:

The world’s most-watched sporting competition this year will not be a feel-good affair. FIFA, soccer’s corrupt governing body, awarded the 2022 edition of the World Cup to Qatar via bribery. The teams, players, and fans of the game must now grapple with the complexities of an ethically fraught, morally bankrupt tournament already soaked in blood and oil– a sports-washed public relations exercise for Qatar that has cost over 6,500 lives since the announcement was made.

This dilemma is at the core of World Corrupt, a joint effort from Men in Blazers and Crooked Media. The series will be hosted by two friends, Men in Blazers’ Roger Bennett and Pod Save the World’s Tommy Vietor. Roger’s deep understanding of football history and Tommy’s geopolitical analysis will combine to help listeners understand the tectonic plates shifting under the sporting events they love, and empower them to simultaneously revel in the sporting genius on display, and take action against the grave injustices that have been wrought.

It’s certainly interesting to see notable politics and soccer figures partnering this way, and to see a podcast from a major soccer figure that’s going to dive into all the off-the-field issues around this particular World Cup. This one will be worth keeping an eye out for.

World Corrupt will be released on both the Pod Save The World and Men In Blazers podcasts feeds beginning in October. More on it can be found on the Crooked Media site here.