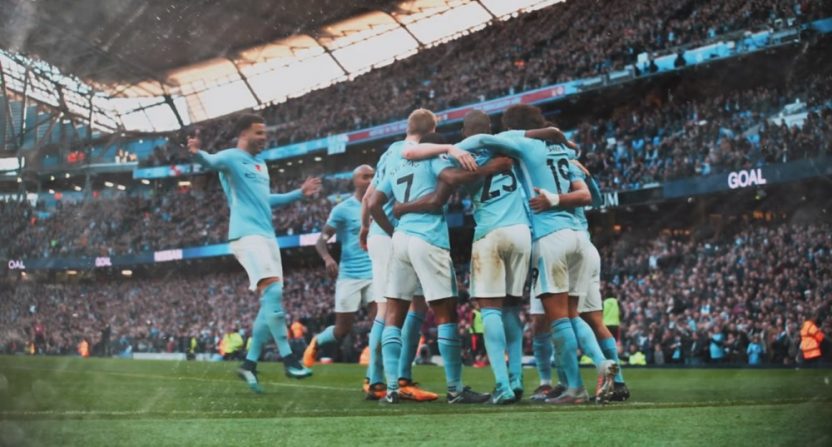 On Friday, Amazon released all eight episodes of their latest All Or Nothing series, focusing on Premier League side Manchester City during their record-breaking 2017-18 Premier League championship season.

After watching the whole series (the first four throughout this week, courtesy of a screener from Amazon, and the second four immediately after their release on Prime Video), I can confidently say that Amazon has set the bar incredibly high for any future behind the scenes documentary series, and it may be impossible for any outlet or team to clear that bar.

This edition of All or Nothing gives fans a level of access that they never could have dreamed of, especially in the notoriously secretive world of top flight European soccer. Amazon’s cameras were granted access to Manchester City’s team talks, locker room, meeting rooms, and training facilities.

The access is great, but the more important part is what you actually do with that access. In that regard, Amazon delivers in spades. The series isn’t a game by game recap of the season, but does touch on most games (with special focus placed on key games, like City’s Manchester Derby road win, their draw away at Crystal Palace, their road defeat to Liverpool, and their FA Cup road victory against Cardiff City). In between the matches, which feature highlights of the matches themselves, dressing room talks, and previously unseen shots of the bench, the series focuses on the daily goings on of the club, including recovery from injuries, tactics, transfer talk (with incredible detail into Aymeric Laporte’s midseason transfer from Athletic Bilbao), and more mundane (yet still entertaining) activities, featuring City’s kitmen, laundry staff, and other team personnel.

A number personalities stand out from the rest of the pack. It’s not remotely surprising to see someone like left back Benjamin Mendy, a social media superstar, or Vincent Kompany, the club’s captain and a well-spoken, occasional TV pundit, stealing the scenes they’re in, nor is it a surprise to see Pep Guardiola’s incredible passion and enthusiasm ooze through the screen. But a pair of Guardiola’s assistants, Mikel Arteta and current NYCFC head coach Domenic Torrent, provide plenty of memorable moments. Oddly enough, so does the assistant kitman, Brandon Ashton, perhaps the most entertaining personality featured in the series.

All or Nothing also does a fantastic job giving viewers some insight into the emotions of players. Because of the access Amazon was given, players were often caught being candid, which you typically don’t see in controlled media settings. For example, after the FA Cup loss to Wigan, Fabian Delph storms back into the dressing room, yelling, cursing, and slamming doors. After the shocking Manchester Derby home defeat, players are heard shouting in anger and dismay on their way to the dressing room, and sit stunned after the match, attempting to break down their collapse.

Some players also have their personal, off the field lives explores, though not nearly to the degree we saw in Netflix’s Juventus: First Team (which I reviewed earlier this year). Star striker Sergio Aguero gives Amazon a tour of his home in Manchester, and it’s actually somewhat heartbreaking to hear him talk about how his son lives in Argentina and only comes to Manchester for a week once a month. In a later episode, Aguero smiles triumphantly after scoring four against Leicester City…because after the match, he got Jamie Vardy’s shirt for his son, who texted him prior to the match and asked for it. It’s a moment that makes you smile, especially after what viewers saw in the earlier episode with Aguero talking about his son and showing off his room in Manchester.

All in all, I think this Manchester City season of All or Nothing was a perfect storm for Amazon. They followed a team that had an incredibly successful, historic season (which really didn’t happen with the Arizona Cardinals, Dallas Cowboys, Los Angeles Rams, or Michigan Wolverines, all previously featured on All or Nothing), received an unprecedented level of access to the club, and in contrast to the football teams that were followed in the past, there were far fewer personalities to follow, allowing all of their characters to develop.

If one domino fell in another direction (Amazon didn’t receive the level of access they did, City didn’t win a trophy, players weren’t open with the cameras), this series probably wouldn’t have been executed this well, and it would have been a disappointment. However, everything lined up perfectly for Amazon, and the end result is a series that will be talked about for years and could provide the template going forward for creating any new sports documentary series.