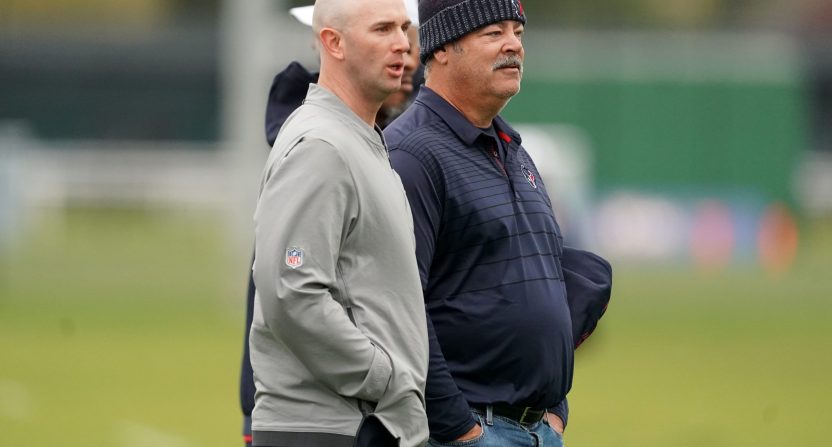 The Houston Texans are a mess of an NFL franchise at the moment, that doesn’t seem to be in dispute. However, as the team attempts, likely in vain, to convince star quarterback Deshaun Watson to remain in Houston, it appears that the reporting that surrounds their dysfunction is reaching a boiling point within the organization, chiefly from executive vice president of football operations Jack Easterby.

Per SI’s Jenny Vrentas, Easterby has told multiple people that he wants to sue the media organization over defamation, though no lawsuit has yet to be filed. Easterby is also reportedly telling others inside and outside the organization that the Kraft family, which owns the New England Patriots, is pushing for all of the negative press surrounding him and the Texans, despite the fact that the Krafts have no financial stake in SI.com or it’s owners.

Two paragraphs we never expected to have to write: pic.twitter.com/rF2mgqIIvP

This comes as part of a larger story published Saturday on SI.com outlining a culture of dysfunction and disinformation within the Texans, with a focus on the way Easterby reportedly communicates with Watson, J.J. Watt, and other Houston players. Coupled with Easterby’s reported integration of religious moments that made others uncomfortable and the selection of Nick Caserio as the team’s new GM over POC candidates whom Watson had expressed excitement about, the article (and many others like it) paint a picture of an organization unwilling to look in the mirror at where the problems truly lay while star players are shuffled out of town with regularity.

Meanwhile, Watson seems to have made it abundantly clear that just one season after signing a four-year, $156 million extension, he’s currently interested in moving on and getting away from the franchise.

Watson’s tweet is a reference to the way his mindset was described following the team’s trading of star wide receiver DeAndre Hopkins.

So strong as the tide turned against Easterby, even Texans legend Andre Johnson tweeted out full support for Watson while also throwing serious shade at the franchise and their EVP.

If I’m @deshaunwatson I will stand my ground. The Texans organization is known for wasting players careers. Since Jack Easterby has walk into the building nothing good has happened in/for the organization and for some reason someone can’t seem to see what’s going on. Pathetic!!!

All of this drama led many to believe that Easterby would be fired by team chairman Cal McNair,  in order to appease Watson. However, the relationship between Easterby and McNair is said to be stronger than any kind of football sense that might exist. The McNairs have made it clear that Easterby isn’t going anywhere, though they still seem to think he can keep his star QB in the fold.

McNair takes responsibility for state of the organization: 'If players, media and fans are upset, that’s on me. And I’ll apologize for my actions or communications that created mistrust. I accept the fans’ frustration. I’ll listen and learn' https://t.co/dVGVqWy4VG

“The scrutiny on Jack is really unjustified,” McNair said. “Jack was put into that role (interim GM) the organization needed by me. If missteps were made during that process, we’ll own those within our building. Jack will (return) to the role he was brought here for and what he grew into after he got here.”

As for Watson, the quarterback who’s unhappy because he wasn’t kept up to date on the general manager search that brought Nick Caserio to the Texans, McNair said, “Deshaun and I connected over text since he’s returned from vacation. It’s no secret he’s disappointed in the (lack of) communication during the hiring process.”

The Texans already seemed to have a strained relationship when it came to player relations and the 2020 season might have secured their reputation as the last place any coveted free agent would want to consider going. The Watson saga is destined to end badly and it appears that the team may have even strained its relationship with the face of the franchise, J.J. Watt. Couple that with spurious legal threats at media coverage and outlandish rumormongering about rival franchises and their financial connections and this seems like it’s only going to get uglier.