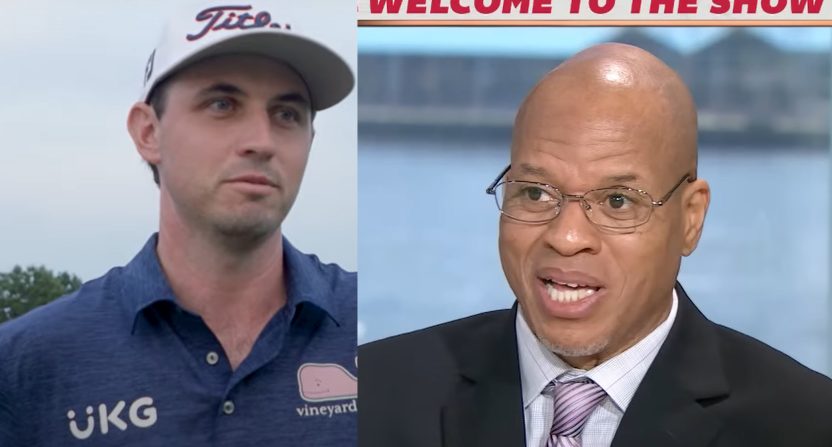 ESPN Radio’s Freddie Coleman was filling in on the network’s Keyshawn J-Will & Max this week and he eagerly welcomed golfer Justin Thomas to the show for an interview. But Coleman faced one big problem in doing so. It wasn’t Thomas on the phone, but rather J.T. Poston (who just won the John Deere Classic Sunday).

“It’s always cool to talk to a two-time major champ when it comes to golf, especially when the golfer has gotten a lot of attention when it comes to on and off the course. He is Justin Thomas,” Coleman said. “I got to ask you about something you put on Twitter seven days ago, and I quote, ‘When in the car do y’all ever kinda hope somebody doesn’t abide by driving rules so you get an excuse to honk your horn? I mean, it doesn’t happen often. But when I’m in a horn honking mood, dang it feels nice to lay on that thing. I can’t be alone here right???’ What led up to that, Justin?”

With a question like that, it was clear Coleman (seen at right above) was prepared to interview Thomas. This wasn’t a case of him misidentifying J.T. Poston (seen at left above), he was ready with a detailed intro and seemed to legitimately think Thomas was on the phone.

“Guys, there might be a mix-up. This is J.T. Poston, not Justin Thomas,” Poston said with an awkward chuckle. “I get this all the time, the other J.T. But – uh – I don’t know you might have to ask him.”

“My mistake on that one,” Coleman quickly chimed in. “My mistake, my friend, from that standpoint, my apologies when it comes to that.”

It’s Coleman’s voice on the tape so he’s going to absorb the brunt of the gaffe, but the mistake wasn’t all his. I appreciate that he jumped in and accepted responsibility instead of pulling a Mike Francesa or Christopher “Mad Dog” Russo by laying into the producers. That said, where were the producers? I doubt it was Coleman who booked Poston on the show, and the interview must have been discussed at some point off-air. Even if it wasn’t, someone has to get in his ear when he introduces Thomas to the show with a lengthy question about a week-old tweet. Coleman even threw out Thomas’s Twitter handle, and the rest of the show staff just let it happen?

How about Jay Williams? He was co-hosting and laughed as Coleman gave out Justin Thomas’s Twitter handle and asked about the honking tweet. So either Williams similarly didn’t know who they were interviewing, or he just abandoned his co-host at an inopportune time. In either scenario, Williams deserves some blame. This is not to excuse Coleman, he was faulted for the awkward blunder and he quickly accepted responsibility, but this was a mistake by the entire show, not just the voice who introduced Thomas.

Credit the entire show and Poston for being able to quickly turn the page on the mistake, however, with Coleman and Williams conducting a solid interview once they were aware of who was on the phone.

(Update: due to an editing error, this post initially identified Thomas as a LIV Golf participant. Like Poston, he still plays on the PGA Tour. We regret the error.)