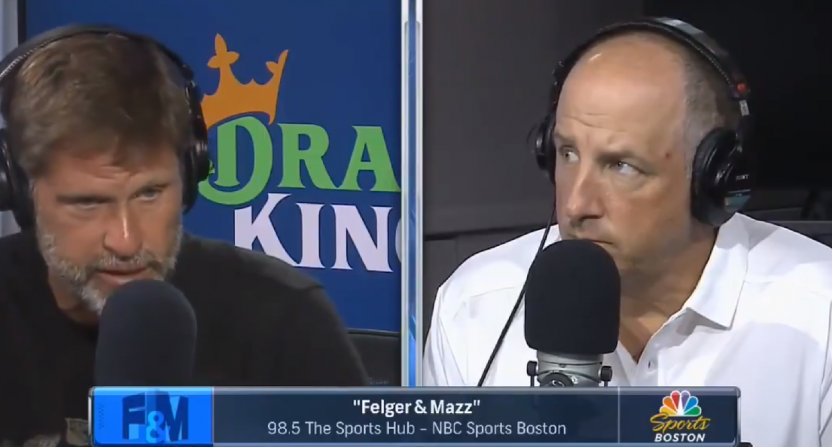 Cam Newton’s decision to sign with the New England Patriots has felt inevitable for months now. And while questions about his health remain, it’s hard to find anyone who doesn’t see the move as an obvious one for New England given the risk and possible upside.

Also inevitable: the horrible Boston sports radio takes about Cam. The only thing surprising has been the speed with which the first horrible sports radio segment got to air; Newton signed on Sunday night, and Tuesday afternoon local sports radio show Felger and Mazz spent a fair bit of time preemptively pissed at Newton for such horribly selfish, un-Patriot acts as celebrating touchdowns.

You probably won't make it through this entire clip. pic.twitter.com/1CcLXvsplK

It’s tough to tell what the worst part is (well, no, it’s the thinly-coded racism) it’s the idea that the “culture” of the Patriots is at risk by bringing in Newton. Felger and/or Mazz (I’m not going to bother learning which one is which, but considering how big both guys are on team culture, that’s how they probably want it to be) mention it right away, as though Cam coming in and displaying any amount of personality might sully the team’s finely honed locker room vibe.

That team culture fostered things like Spygate, Deflategate, Tom Brady’s trainer and his ridiculous methods, Bob Kraft and a massage parlor, and the news that the Newton signing effectively squashed: another massive fine and draft pick penalty for filming another team’s sideline. We wouldn’t want that particular boat rocked!

Anyway, that’s an incredibly gross segment, and there are probably dozens more coming. Try to do better.