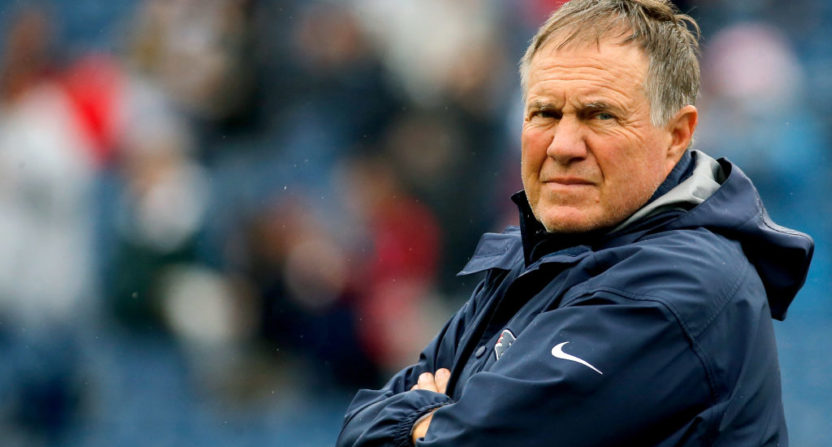 More than six months after a camera crew working for the New England Patriots was caught filming the Cincinnati Bengals’ sideline from the press box during a Dec. 8 game against the Cleveland Browns, the NFL has issued a punishment against the Patriots.

And the penalties seem relatively harsh.

Developing news story: The NFL has handed down the following penalties to the Patriots for their television crew filming the field and Cincinnati sideline during a December game between the Bengals and Browns, per sources: pic.twitter.com/Co8kvuofR6

At the time, the Patriots claimed that the camera crew didn’t work directly for the team — or at least weren’t a part of football operations — but was part of owner Robert Kraft’s production company, Kraft Sports + Entertainment. The crew was at the Browns’ home stadium to film a Patriots advance scout for the team’s behind-the-scenes video series, “Do Your Job,” and was properly credentialed to do so.

But when alerted of the filming, officials with the Bengals confronted the crew and asked to see what was being recorded. One week later, Jay Glazer showed exclusive footage of the confrontation between Cincinnati’s security team and the Patriots’ camera crew on the Fox NFL Sunday pregame show.

As the footage shows, the Bengals security officials were extremely skeptical of the Patriots’ videographer saying he was filming the team’s advance scout. The scout is nowhere to be seen in the video, which is clearly focused on the Cincinnati sideline and substitution patterns.

For what it’s worth, the Patriots defeated the Bengals (who were 1-12 going into the game), 34-13, in their Week 14 matchup. But whether or not New England gained an advantage from filming the Cincinnati sideline the previous week is beside the point. Perception is everything here.

Considering New England’s previous history with the 2007 “Spygate” scandal, in which a Patriots’ video assistant was caught filming the New York Jets’ defensive signals from the sideline, and allegations that the team filmed a St. Louis Rams’ walk-through practice before Super Bowl XXXVI, there was little to no benefit of the doubt from other NFL teams, media, and fans.

The NFL’s penalty this time around is less severe than the punishment for the 2007 “Spygate” case. Back then, coach Bill Belichick was fined $500,000, the Patriots organization was docked $250,000, and the team lost its 2008 first-round draft selection. But $1.1 million in fines, Mondello losing his job, New England losing its 2021 third-round pick, and team camera crews being prohibited from filming any games during the 2020 season is not insignificant.

Credit to the Patriots for signing Cam Newton the same night they got stripped a third-round pick and fined $1.1m. Genius PR move

Interestingly, news of the Patriots signing free-agent quarterback Cam Newton broke just before the NFL announced its penalties. Is the timing a coincidence there or was New England hoping to overshadow reports of this punishment with splashy news of arguably the best QB available challenging Jarrett Stidham for the starting job and possibly replacing Tom Brady this season?

Something worth noting in the Patriots’ signing of Newton: As ESPN’s Adam Schefter reports, New England could essentially get back the third-round pick that was taken from them as compensation if Newton signs with another team after the 2020 season.