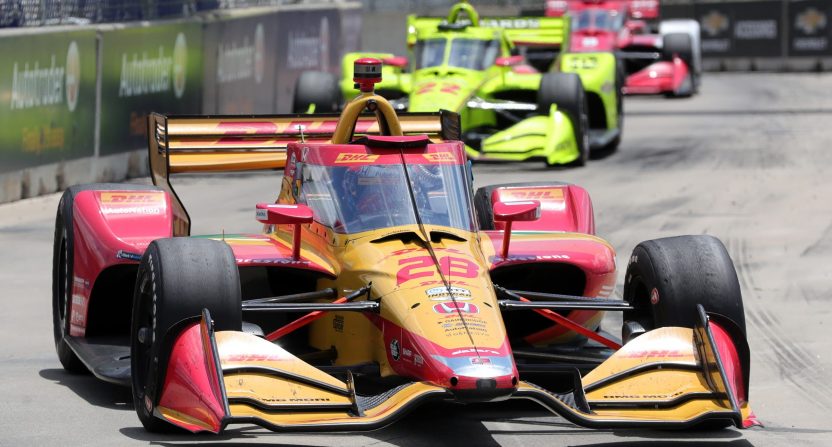 The Indy 500 on NBC drew solid numbers for what at the time felt like a possible swan song for the network.

In May, every indication was that the IndyCar series (and by extension, the Indy 500) would be leaving NBC. Now, though, a report from Adam Stern and John Ourand at Sports Business Journal has NBC the likely destination for the next rights deal, in large part because there just isn’t another suitor.

Last month we wrote this about possible destinations:

If IndyCar and NBC decide to go their separate ways, CBS is reportedly the likely destination for the series. It’s unclear if that means races would go to CBS, CBSSN, or Paramount+ but CBS has had a renewed focus in motorsports over the past year. They recently took over Formula E rights and will have the new Superstar Racing Experience on regular CBS in June. And as SBJ noted, CBS chairman Sean McManus told them that they “would look into other auto racing rights when their deals came up for renewal.”

NBC, or at least the NBCSN channel, has had IndyCar rights since 2008 when it was Versus and NBC wasn’t yet involved. When NBC took over, they expanded their IndyCar footprint and took over exclusive rights from ABC/ESPN beginning with the 2019 season. That year, the Indy 500 moved off ABC for the first time since 1965 and this year’s race will be the third on NBC.

Now, though, SBJ reports that NBC might end up holding onto the series by default, with CBS and ESPN unlikely to add a competing racing property to their respective portfolios.

A month after it appeared that NBC Sports was about to walk away from its IndyCar media rights, signs are emerging that the two sides are getting close to a new deal, sources say.

IndyCar’s current deal with NBC, which is worth a little less than $20 million per year, ends after this season. A new deal is not imminent, sources said, but NBC and IndyCar executives have held enough productive meetings in recent weeks that sources are optimistic the series will remain on NBC.

One reason for the newfound momentum is a lack of interest from other networks. Neither CBS nor ESPN have had serious discussions with IndyCar, according to multiple sources. Fox executives have had conversations with IndyCar, but sources described those talks as preliminary and not serious.

CBS seems focused on the Superstar Racing Experience series, while ESPN holds the American rights to Formula 1, which is currently seeing a massive ratings uptick. NBC, meanwhile, would presumably still be able to offer network exposure for the series, which could help offset the loss of NBCSN and the likely shift of some racing to Peacock in the coming years as it continues to be home to a lot of NBC’s sporting properties.

Obviously it’s not the bidding war that leagues usually want to see when rights come up for bid, but for IndyCar, having a consistent home like NBC where they can build a relationship with viewers might make for a better situation.