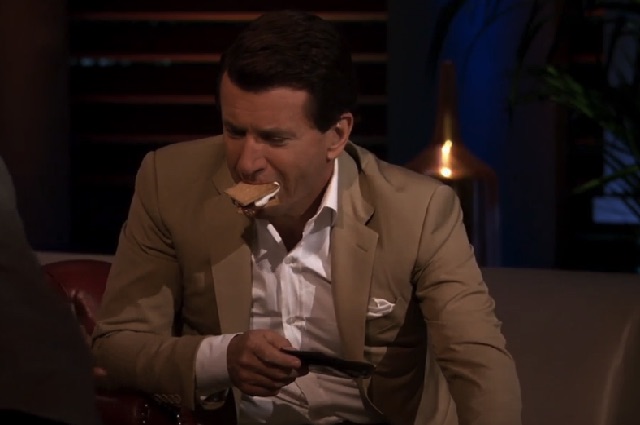 But here, we go swimming in the Shark Tank. Let’s jump in! 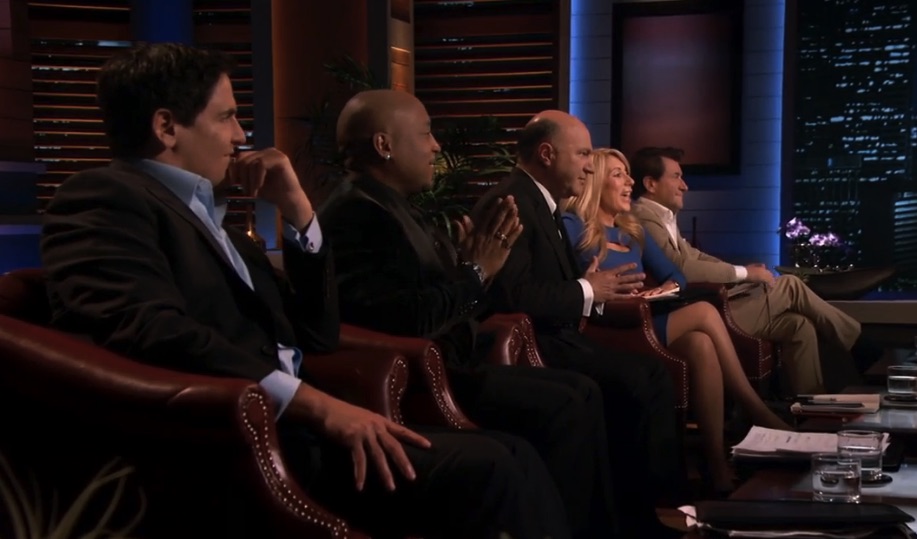 The Bait: A little-kid camp for grownups, a jimmy hat for midlife-crisis-mobiles, a high schooler’s leveled-up lax gear and a reimagined old toy for old rich folks.

For a generation of adults who struggle with #adulting, why not offer them a good old-fashioned summer camp? Tischauer rents out premium kids’ campgrounds during the offseason, when kids aren’t using them. He does the marketing, takes the reservations, and boom. No upfront costs!

Adults partake in all the usual camp stuff, from archery to ziplines. Except now, they’re grown-ups, so when the sun goes down, the fun’s just getting started. Tischauer is hoping to do 11 camps for 1,800 people this year, leading to $800,000 in sales. With $200 profit on the $478-a-head-price of a three-day weekend, he’s bringing big money in the door—but not four-million-dollar-valuation big.

So Cuban wants to know: where could the investment money possibly go? The only cost Tischauer has is marketing. Tischauer says that’s what it’s for, to expand into new markets—but if he’s just renting facilities that are already there, he doesn’t need any infrastructure… or capital.

“All you’re trying to do,” Daymond says, “is basically gold-dig.” Without making the Kanye reference, we are going to go to a DRAMATIC COMMERCIAL BREAK.

RT if you would love to go to camp with @kevinolearytv #SharkTank pic.twitter.com/X3R0WLnMLg

“By 2019,” Tischauer says, comparing it to the Color Run or Tough Mudder, “I’m projecting $35,000,000 in sales.” Daymond isn’t impressed by the potential long-term payoff. He sees more immediate liability issues involving overnight stays for adults with alcohol. He’s out.

“Money is not always the solution to grow every business,” Robert says. “I don’t see how my money is going to add value to you.” He’s out.

Cuban points out that at the 7.5 percent stake, even a million a year in profit only means 75 grand in his pocket. “It doesn’t move the needle,” he says. Tischauer comes with a counter that more than moves the needle—it’s the craziest counter in the history of the show: $300,000 in return for a 25 percent equity stake, but only if all five Sharks are in.

“Yeah… that just makes it sound even shadier.” Cuban is out.

Swim or Chum? …and so they all are. Gutsy, but Tischauer is CHUM.

Should You Buy? This sounds crazy rad. You absolutely SHOULD BUY if there’s one anywhere near you.

Without specifically invoking climate change, Werner and Harris lead off explaining that flood damage to cars is a major threat to one of a household’s most valuable assets—and a threat most car owners are totally unprepared for.

“Robert,” they say, “you’re a car guy,” and he is. So it falls to Herjavec to drive a Chevy Volt into a giant plastic sleeve:

Cuban makes a prophylactic joke, which I probably should have seen coming.

Robert seemed to enjoy the demo—but he says he bought something similar almost 15 years ago, which self-inflates around a car. Werner counters that in a natural disaster, you can’t rely on something that needs electricity. With two people and a few spare minutes, EVP can spare your Lambo (or Camry) from a watery grave.

Werner says he got into this business because he was sick of being a repo man. Where he once happily hooked-and-booked away the rides of scammers and dot-com-busters, the Great Recession forced Werner to repossess his neighbors’ rides.

“I felt my karma shifting,” he said, and developed a Superstorm-Sandy-proof product that could help stop his neighbors from losing their cars. Partnering with Harris, the two sold out their first lot through body shops and car clubs in just two weeks.

“I don’t see this as a business that’s going to scale,” Cuban says. A successful business isn’t necessarily an investible one. He’s out. Robert thinks people just don’t worry about their cars in emergency sictionat.

“I like this,” O’Leary declares. He offers a CLASSIC Mister Wonderful deal: He gives them the $50,000, and they kick him $30 a unit… forever. The guys are hesitant until they get assurance that O’Leary will be heavily involved in marketing and promotion; expertise and connections are what they’re here for.

Speaking of which, Daymond jumps in with an offer: $50,000 to split the business evenly three ways. Werner asks him to share his marketing plan, and The Sharks all chortle at the implication Daymond John doesn’t know how to sell through retail. Then they point out that if a big car-care company comes along to buy the idea, O’Leary’s royalty will make it unsellable.

O’Leary modifies the royalty deal: He’ll lift the royalty once he quadruples his money. Now what?

Swim or Chum? “I appreciate that offer,” says Werner, “but I’m going with Brooklyn.” EVP will SWIM with Daymond.

Should You Buy? Unless you live in Miami, Louisiana, or some other state where flood damage is a danger, SHOULD NOT BUY.

Zietz, a young lacrosse player who got sick of wearing out crappy gear that didn’t help her get better, got inspired by her entrepreneurial parents and launched her own line of lacrosse practice equipment. Her presentation is polished and enthusiastic, and the product looks great:

So wait… how young is she, exactly?

“I’m 15 today,” she says, and whaaaaaaaat. A graduate of something called the “Young Entrepreneurs Academy,” Zeitz borrowed $30,000 from her parents, and has paid them back on $300,000 in sales since January 2014. She throws serious shade on generic sports-gear companies whose employees “probably don’t even play lacrosse.”

She wakes up at 6:00, works on the business, takes the bus to school, takes customer calls in breaks and passing time, then comes home, does homework, goes to lacrosse practice, then does late-night Skype calls to West Coast and overseas business partners.

So, again: What’s the investment needed for?

“I need the money to increase my online and retail distribution,” she says. She claims she’s talking to Walmart right now, and wants to hire traveling sales teams who can hit up lacrosse tournaments.

“That’s a $30 million business,” O’Leary says. “You can’t do that in between school and practice.” He’s impressed and “torn,” but can’t see how she’ll scale it while it’s still a hobby. He’s out. Cuban doesn’t know lacrosse; he’s out. Robert is also out.

“I think I’d be doing you a disservice,” says Daymond, if he took a chunk of her hard-built business for cash she doesn’t need.

That’s when Lori shares an incredible moment with Zeitz:

You can tell it’s deeply personal for both of them—and as Zeitz Tweeted at me during the show, it wasn’t about the show:

That moment was real. https://t.co/EVTcwB6gfm

Swim or Chum? Zeitz didn’t get an investor, but right now, she doesn’t need one (and probably wouldn’t be able to take one on without dropping both school and lacrosse). CHUM.

Should You Buy? As a youth soccer coach, the quality of consumer soccer rebounders and goals is brutal; I imagine it’s at least as bad in the lax world. If Gladiator makes a product that meets your needs, you absolutely SHOULD BUY.

A longtime professional AV geek who was feeling the pinch of shrinking markets, Baker was on the edge of losing his house. He’d been refurbishing pinball cabinets with digital screens and electronic guts as a sideline. A week before the bank foreclosed on his house, he put the pedal to the medal and ended up paying for the whole thing in cash.

Now, they’re making fully custom cabinets with licensed software. It’s a high-end proposition, but Baker’s getting a high level of interest. Not just from pinball junkies, but commercial vendors:

This team did $100k in sales at a 2 day long trade show! #Sharks love #Sales. #SharkTank

“I own 10 pinball machines,” Herjavec says. They’re much cheaper, usually, and feel it. Baker’s mix of high-end analog-feeling inputs and high-tech optics and haptics provide a brilliant new experience—but the problem is, each component is something Baker has to pay top dollar for, and then pass that cost onto the customer. He’s making a tiny profit, but only because he’s not drawing a salary. Robert is not impressed.

“You don’t make the most vital component of it: the software.” Without building an internal software development team that can push out new games and features, Robert sees this as a boutique product for old rich guys—with zero hope of scaling.

“What I see is a platform for gaming,” Cuban says, something that goes far beyond what’s currently on the market. There’s a lot of potential, but Baker isn’t yet close to realizing it.

Maybe he’ll make progress during the DRAMATIC COMMERCIAL BREAK? In fact, we know he will, because during the break the official @ABCSharkTank Twitter account blasts out a congratulatory Tweet:

“The direction you told me,” Cuban says, is not the direction he wants to go. Cuban doesn’t want to build out the development team Baker would need to capitalize on the big commercial arcade market. There’s only one Shark left in, and he speaks up.

“I’m not as old as some of the Sharks up here,” Daymond says. Whoa, could he be considering an offer? Indeed, he is—but only if Baker is willing to stick to sales and evangelism, while one of Daymond’s other companies takes the lead on product development. Baker, emphatically, is so willing.

Daymond offers $200,000 for a 30 percent stake in the company, twice what Baker wanted. Baker counters at 20, despite O’Leary encouraging him to take Daymond’s first offer. Daymond counters at 25 percent.

Will they meet in the middle?!? The BIG SUSPENSE is significantly lessened by already knowing the answer.

Swim or Chum? Yes, they meet in the middle. “It’s overwhelming for me,” Baker says, “a little guy from Cincinnati, OH.” Daymond is investing in HIM, Baker, even more than the product he’s built. SWIM.

Should You Buy? If you have eight grand to spend on a top-end pinball machine—that could someday be upgraded with new tables, skins, etc., then you most definitely SHOULD BUY.