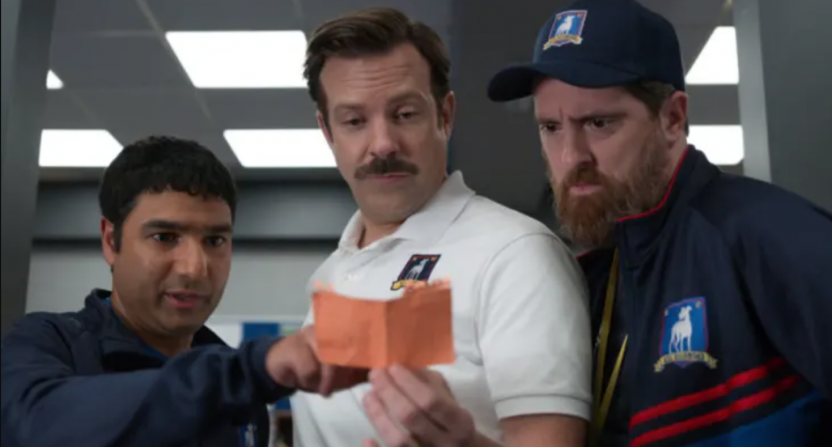 We love Ted Lasso. You love Ted Lasso. (Probably.) The soccer-themed comedy was one of the most pleasant surprises of quarantine life in the age of COVID-19. Some realized how wonderful the series was right away, while others came to it later after noticing all the buzz. We’re no different here at Awful Announcing.

So with Season 2 of Ted Lasso upon us, we wanted to make it more fun by rounding up our staff for recaps of each episode (along with whatever content we’re inspired to write). Those will be posted every Monday, so everybody gets a chance to watch over the weekend. On the eve of that second season, a quick look back at Season 1 and what we enjoyed felt like a good way to break the seal.

Jay Rigdon: Listen, there are a ton of viable options here. The writing and the cast combine to create some astoundingly multidimensional characters. But it’s Ted. It has to be Ted, for me.

It’s a role Jason Sudeikis was born to play. His kindness and optimism are otherworldly, but the show doesn’t always treat them as positives. It also allows us glimpses into the cracks, too, especially whenever we get scenes of Ted alone; calling his wife in the pilot, drinking at a hotel while contemplating divorce papers, etc. Ted Lasso is both relatable and aspirational. Neither is easy to be, but here we are.

Sean Keeley: While I certainly wouldn’t have an issue with Ted being the pick here, I’m going to say it’s Rebecca.  This role, the spurned owner who wants to ruin AFC Richmond because of her ex-husband, could have been pretty one-note (like her counterpart in “Major League”).

But I really love the way Hannah Waddingham straddles the line between devious and sympathetic. She’s not a villain, even if some of the things she does read that way. You also see her humanity as Ted’s affable nature wears her down and makes her realize that her grand plan has collateral damage beyond her personal goals. There are a lot of directions the character can go in from here.

Matt Clapp: Going with the main character of a series is usually a boring answer, but Ted Lasso is an unbelievable character. And could you picture anybody but Jason Sudeikis playing it? He’s fantastic. Ted is incredibly likable, witty, unique, charming, understanding, forgiving, and optimistic to a level that’s even infectious to the viewer (and it was something we all needed in 2020). And with unparalleled one-liners and analogies.

Ian Casselberry: Roy Kent. I relate to old and cranky. He’s introduced as an obstacle to Ted, an old warhorse who has to be won over. But as with everyone else, Ted breaks through. And then we see the angry man’s soft underbelly. He loves his 6-year-old niece. He wants to pursue an adult relationship. He’s terrified of what happens if he no longer has soccer. And he does a terrible imitation of Ted.

IC: Ep. 9, “All Apologies.” Time to confront reality. Rebecca has to face scheming against the utterly kind Ted. Ted is confronted by needing to bench Roy for the good of the team. And Roy needs to accept that he’s no longer the player he once was. Three great scenes: 1) Ted accepting Rebecca’s apology, 2) Roy’s niece saying why she loves her uncle, and 3) Rebecca also apologizing to Higgins.

MC: “Make Rebecca Great Again.” This episode had a little bit of everything that the show brings to the table. It will make you laugh, and it very well may make you cry. Ted Lasso going through the agony of divorce and having a panic attack feels all too genuine and relatable to the viewer, and is the kind of stuff that nobody would’ve predicted before this series came out. This show has so much more depth and charm than it has any right to be, and this episode encapsulates it beautifully.

SK: “Two Aces,” if only for the Allen Iverson “Practice” rant being worked into the show so well that it actually feels like an authentic scene unrelated to the source material.

JR: “Make Rebecca Great Again” is a phenomenal episode of television. Dealing with Ted and Rebecca’s parallel stories (one dealing with his uncertainty and anxiety at the start of a divorce, the other dealing with how to reconnect with herself after the relationship ended) and having them meet up at the end, with Rebecca helping Ted as a friend from a place of experience despite not knowing why Ted was having his particular breakdown… just so good. Especially because she is still, in part, working to sabotage him professionally.

What’s a quote or scene that’s stuck with you?

SK: I think the scene I remember most comes from Episode 8, “The Diamond.” Roy has started dating Keeley and is troubled by the fact that she used to sleep with Jamie. Ted calls up the Diamond Dogs to bring some group advice for one of life’s quintessential conundrums for so many people (but certainly men).

Ted playfully calls out the hypocrisy of Roy’s concern over Keeley’s past when he has a past of his own. And after some more banter, Ted lays it out as clean as possible, saying “Don’t let her past much around with y’all’s future.” When Roy notes that Keeley and Jamie were together the night before, the Dogs clarify that Roy and she weren’t actually together and, in the most succinct piece of advice that Roy, and many of us, needed to hear, Coach Hunt says, “Grow up… and get over it.” I just love it as a great moment for the characters of the show that also felt like really important life advice in general.

JR: The darts scene is a classic, but I’ll cheat and mention two others. Both scenes hit me particularly hard when I rewatched season 1. First, in Episode 4 (“For The Children”), Ted both kindly broaches the subject of Nate’s suit not fitting (which makes sense as it wasn’t Nate’s suit), and then just buys him a new one. That Ted would buy Nate the new suit is obviously a major act of kindness, but it’s the subtle way he brings it up (“Are you the kind of guy who wants to know if you have something in your teeth?”) rather than doing what other sitcoms or movies featuring a “kind” character would do: blurting “Hey Nate, that suit looks like shit! Let’s get you a new one!” It speaks volumes.

Then, in “Tan Lines,” at the end, Coach Beard wordlessly bringing Ted a pint and offering silent company after Ted and his wife both realize their marriage is over.

MC: From the first episode, “Well, Trent, I’m gonna put it the same way the US Supreme Court did back in 1964 when they defined pornography. It ain’t easy to explain, but you know it when you see it.”

IC: It’s practically a throwaway line but in Ep. 5, “Tan Lines,” I love it when Coach Beard gives Higgins his lost phone and says “I deleted some apps to optimize performance.” Might say everything you need to know about Ted’s mysterious right-hand man.

Did anything not work for you?

JR: The only thing that really stands out as maybe not working within the world of the show is the idea that Ted didn’t really contemplate what Rebecca was plotting. Just from a pop-cultural literacy standpoint, the “reverse Major League” thing she had going would seem to be right in Ted and Beard’s wheelhouse. But, honestly, it doesn’t really matter; I can suspend disbelief for that, or even write it off as having been satisfactorily explained. (Maybe that’s why Ted was so quick to forgive, for example; he wasn’t surprised.)

IC: Back to Ep. 5, I felt like the writers didn’t explain why Michelle wanted to leave Ted well enough, and it seemed unfair to her character. But on a rewatch, I realized maybe this was left deliberately vague so viewers could project their own theories or relationship experiences onto the story. Like it might get tiresome to be with a coach who’s always trying to solve every issue.

SK: I’ll agree with Ian that, while the show needed to explain how a guy like Ted would leave his family to take this job, the explanation we got didn’t quite sit right. Or at least, the execution of it didn’t land as well as it could have. That said, they were already trying to fit a square peg in a round hole with that very sweaty plot contrivance, so it’s hard to see how they could have pulled that off better without making it a heavier storyline that didn’t vibe with the rest of the show. I got the sense the show just wanted to quickly explain that and move on, and I totally see why.

Predictions for Season 2? What you’re looking forward to?

SK: Aside from just being interested in seeing where all of the characters go from here, I’m intrigued to see if and how they keep Jamie in the storyline. If he’s going to be playing for another side moving forward, it might get a little sweaty trying to incorporate him into the ongoing plot. Or maybe he won’t be and I could see that as well.

I like that we now also have a bit more drama in the fact that AFC Richmond has to fight to get promoted back up after being relegated. And since last season ended on a downer, I’m hopeful we’ll see Ted and the team be victorious this time around (after some setbacks and plenty of speeches of course).

IC: Other than a couple of glimpses in the first Season 2 trailer, we’ve seen very little about the sports psychologist, Sharon, (played by Sarah Niles, I May Destroy You), that will be introduced into the story. The potential tension seems fascinating. Whose idea was it to hire her? Ted prides himself on getting through to his players, but how could his methods clash with Sharon’s? Will Ted be “wrong” about anything?

Season 2 of Ted Lasso will premiere on Apple TV+ on July 23. We’ll have our roundtable-style recaps here at Awful Announcing every Monday.