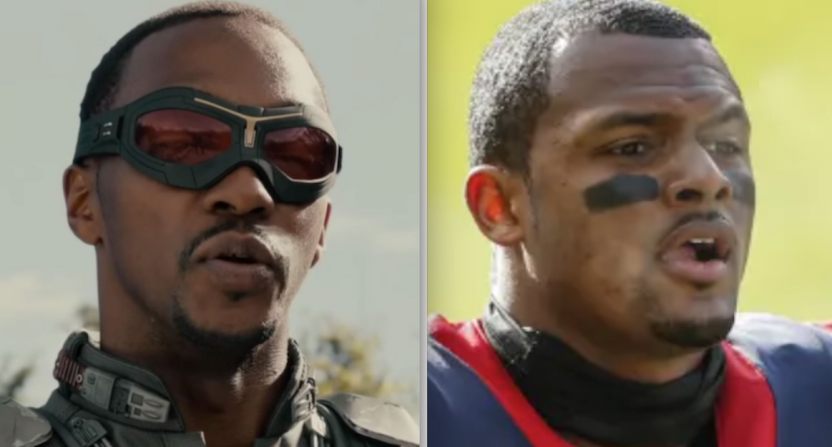 Being big sports fans — especially New York Knicks fans — themselves, it’s always fun when Desus & Mero talk about sports either when they’re commenting on news stories of the week or with their celebrity guests.

On Thursday night, actor Anthony Mackie joined the pair, presumably to promote the upcoming Disney+ Marvel series, The Falcon and the Winter Soldier, though they didn’t talk much about that. And about halfway through the conversation — after Mackie talked about his life during COVID, raising his four sons, and upcoming projects — The Kid Mero got right to it the New Orleans native and resident about his beloved Saints.

“Is Drew Brees finished?” Mero asked Mackie, putting him on the spot. “Has the Drew Brees era ended? Is it Jameis, is it Taysom? Who’s up next?”

You can watch the entire interview below:

Naturally, Mackie praised Brees’s legacy as the Saints quarterback. How could any Saints fan not do so after 15 seasons, nearly 70,000 passing yards, almost 500 touchdowns, seven division titles, nine playoff berths, and a Super Bowl championship? Brees will forever be a New Orleans sports and cultural legend.

Then Mackie made a bold statement, looking five hours west of New Orleans toward Houston and taking the kind of big swing that characters he’s played such as Sam Wilson (Captain America: The Winter Soldier), Takeshi Kovacs (Altered Carbon), or Captain Leo (Outside the Wire) might attempt. It’s what we do as sports fans. We want our team to make the major impact move.

“The scariest thing in the NFL is Deshaun Watson with Alvin Kamara in the backfield, Michael Thomas in the slot, and Emmanuel Sanders running down the sideline,” said Mackie. “With our defense, that’s the scariest thing, as an opposing team, you can think of.

“Now I’m not gonna tell Deshaun how to handle his business. But if you wanna come to a city where he’ll be appreciated and win a Super Bowl, I’ll pick him up and he can stay at my crib. I’m just sayin’.”

The Rams-Lions trade will have nothing to do with a Watson trade if the Texans do it. They'll want 2 ones, 2 twos and 2 young defensive starters, at the least. Watson, 25, under contract, great QB, team leader, beloved by fans, pillar of the community. Start with the Jets.

It’s doubtful that the Saints can pull off a deal for Watson, with the Texans reportedly seeking two first-round picks, two second-round picks, and two young defensive starters.

New Orleans probably could make a trade like that, starting with this year’s No. 28 selection. But Houston would probably want a higher pick and if not, could reasonably ask for an impact player like Michael Thomas or Marshon Lattimore. One more first-rounder and probably a second- or third-round selection would probably have to be added too.

Would getting another star quarterback be worth that price? Mackie and his fellow Saints fans might believe so.