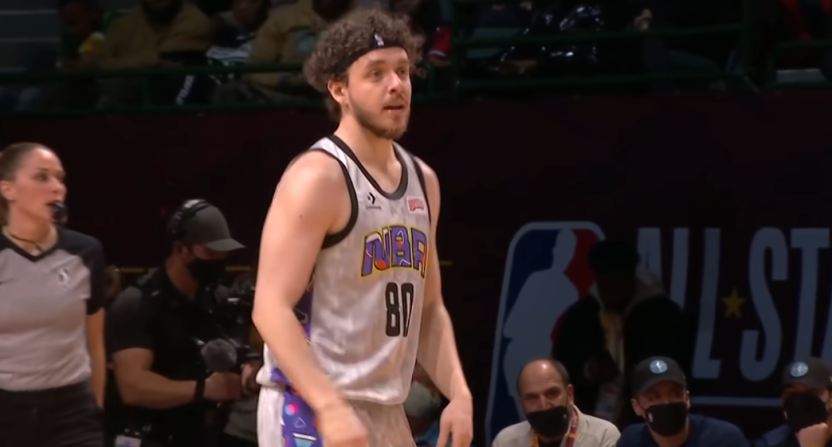 It often seems like there are no new ideas in Hollywood. There are too many remakes, sequels, requels, and spinoffs. Studios would rather safely invest in entertainment with a built-in audience than take a chance on fresh content. That’s the economic reality of the business.

Look at the top-grossing films of 2022 so far, which according to Box Office Mojo, are Spider-Man: No Way Home, The Batman, Uncharted, Scream, and Sing 2. The most original movie on that list is Uncharted, which is based on the PlayStation video game franchise. No matter how much we complain, the industry is incentivized to continue this trend because it makes financial sense.

With that in mind, there was understandably a lot of eye-rolling, pushback, and mockery when it was announced that Jack Harlow would be starring in a White Men Can’t Jump reboot. Is nothing sacred? How dare they remake the 1992 comedy classic about a pair of basketball hustlers, starring Woody Harrelson, Wesley Snipes, and Rosie Perez.

Why are they rebooting “White Men Can't Jump?” You’re never going to get a scene like this again

We’re getting a new version of White Men Can’t Jump whether we want one or not. Harlow, who has no acting experience, takes over the Harrelson role of Billy Hoyle. It will be directed by Calmatic, who will make his feature debut this summer with another 1990s reboot: House Party. That announcement also sparked internet outrage, but this latest plan feels like a bridge too far.

It’s funny. Fans feel a sense of ownership over pop culture, especially when it’s stuff from our youth. Are studios mining our nostalgia purely for profit? If the new White Men Can’t Jump was a sequel, maybe the initial response would have been slightly more favorable. A reboot feels like they’re messing with fond memories. No one enjoys that.

White Men Can’t Jump resonates differently depending on when you first saw it. Maybe you were in your 20s when it came out in theatres. Maybe you were in grade school. Perhaps you weren’t even born yet and were introduced to it by a relative. It’s a beloved film that owns a special place in our hearts because it’s a 90s time capsule.

Having a quality script and the right cast will be crucial. That brings us to Harlow.

You don’t have to look hard to find people grousing over him being the lead. Harlow, who turns 24 next week, has enjoyed a successful career as a rapper with his biggest hit being his 2020 single, “Whats Poppin.”

We shouldn’t dismiss Harlow because he lacks experience. We just saw Alana Haim of the band Haim make a stunning debut in Licorice Pizza, which earned an Oscar nomination for Best Picture.

There’s a reason why many rappers become actors. So much of the rap game is about creating and selling a persona. If artists like Andre 3000, RZA, Common, Queen Latifah, Ice Cube, Ice T, and Will Smith can successfully make the transition, why not Harlow?

Harlow has a love for basketball. He participated in the NBA’s Celebrity All-Star Game, and he wrote a song “Tyler Herro” inspired by the Miami Heat third-year guard. He’s also infamously known for his role in the funniest scandal of the NBA bubble, when Lou Williams was caught at Magic City, violating the league’s COVID protocols.

The responsibility of this movie’s success will fall on the shoulders of Calmatic. He’s best known for music videos, including Lil Nas X’s “Old Town Road.” That’s not uncommon. Many directors get their start making videos and commercials.

Calmatic had on-the-job training with the House Party remake, so he should be able to apply the lessons learned there. The White Men Can’t Jump script is reportedly ready, and 2011 NBA Slam Dunk champion Blake Griffin is one of the producers.

The biggest challenge will be matching the chemistry of the original. That movie worked because of the connections between Harrelson, Snipes, and Perez. That probably can’t be replicated. That doesn’t mean different chemistry can’t win us over.

A key takeaway of the original is that Harrelson’s character Billy Hoyle is underestimated based on appearances. Let’s not do the same with Harlow. Let’s give him and this version of White Men Can’t Jump a shot.