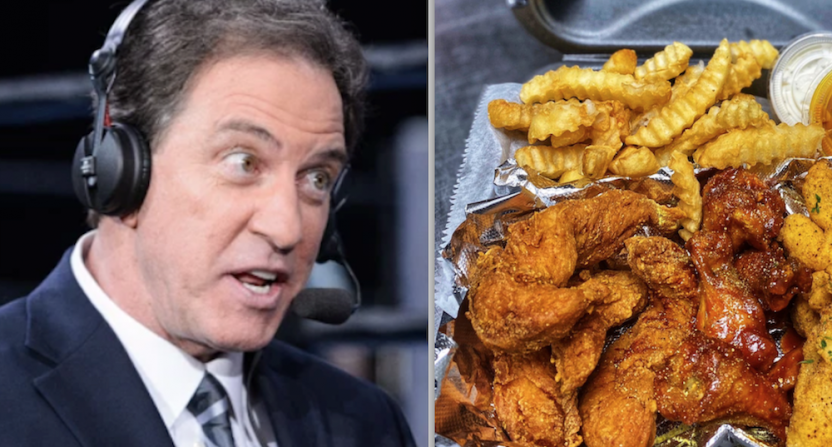 Off the court — and outside the NBA bubble in Orlando — the most entertaining story leading up to the league’s return has been Clippers guard Lou Williams visiting an Atlanta strip club last Thursday (July 23). Williams was allowed to leave the NBA campus to attend the funeral of a family friend. Afterward, he stopped by his “favorite restaurant,” Magic City, for the chicken wings he loves. Reportedly, none of Magic City’s performers were on hand during Williams’ visit.

Nonetheless, he broke the NBA’s COVID-19 protocols. As a result, Williams is now in a 10-day quarantine and won’t play for the Clippers Thursday night. That costs the team its third-leading scorer, averaging 18.7 points per game.

But that hasn’t stopped fans from sympathizing with Williams, especially after pictures of Magic City’s lemon pepper wings circulated on social media. That includes TNT play-by-play broadcaster Kevin Harlan, who requested some of those wings during Tuesday night’s Celtics-Rockets exhibition telecast:

Kevin Harlan put in a request for some Magic City wings during the game ? pic.twitter.com/jBCilCL2PU

“I wanna see how much pull we have in the city of Atlanta, see if we can get some of those chicken wings sent down here to Orlando,” said Harlan, while broadcast partner Reggie Miller reacted as you might expect. “We can celebrate the restart with those wings.”

Harlan didn’t refer to Magic City by name and provide free advertising on a national cable telecast, but knowledgeable NBA and sports fans knew what he was talking about. And why not test the limits of the TNT platform for some fun?

That’s about a 500-mile delivery from Atlanta to Orlando, so the wings might not be that great unless properly packaged. (Would they be as good reheated in an oven?) But FedEx has surely made more difficult and urgent deliveries. The publicity — and jokes — could be worth it for everyone involved.

Now, who wants some chicken wings?