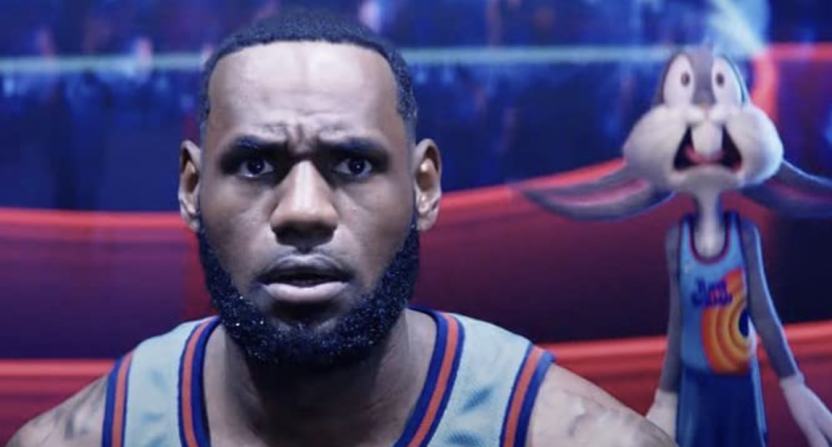 Late into Space Jam: A New Legacy, Ernie Johnson — zapped over from TNT to call the consequential basketball game between the Toon Squad and the Goon Squad — says to broadcast partner Lil Rel Howery, “I’m not exactly sure what we just witnessed here.”

Most viewers of this basketball-cartoon-video-game fantasy starring LeBron James might end up saying the same thing once the credits roll.

Ultimately, the new Space Jam fails to live up to the legacy of the original movie starring Michael Jordan. The argument over whether or not LeBron is an equal or superior to Jordan now extends from the basketball court (and sports debate shows) to movie criticism.

Sure, perhaps the original Space Jam is viewed affectionately through a nostalgia lens and a sequel couldn’t compete with those memories. But the first movie was fun in a way the new version isn’t. Jordan knew what kind of movie he was in and went along with it. He allowed himself to be goofy and for wacky things to happen to him. To put it in Bugs Bunny’s words, Jordan was “looney.”

LeBron never lets himself go to embrace the spirit of the movie, even when he becomes a cartoon alongside Bugs. He looks like this is an obligation for him, as if he should be in a new Space Jam as this generation’s biggest basketball star.

Is this because, as many critics and fans have said, LeBron can’t act? Well, maybe. But he sure looked like he could in 2015’s Trainwreck, playing a satirized version of himself. Maybe that’s a credit to director Judd Apatow and acting alongside Bill Hader. Perhaps they reminded him he was in a comedy, that he was playing a LeBron who fit in that movie.

To be fair, LeBron was also sharing scenes with actual human beings in Trainwreck rather than computer-generated cartoons (and presumably tennis balls on sticks, actors in green-screen suits, or whatever stood in for his co-stars on set) for Space Jam. But maybe LeBron also knew he wasn’t in a kids’ movie, whereas he’s very much in a family-friendly venture here.

This time around, LeBron is playing himself as a father and carrying this project as a brand — he’s a Hollywood producing mogul now — so perhaps he was acutely aware of how he should be presented. As a result, he comes across as stiff much of the time, conscious of the image of LeBron.

Even worse, LeBron is unlikable throughout most of the movie, which couldn’t have been the intention. Whether it’s the direction from Malcolm D. Lee (Girls Trip) or a script credited to six (!) writers, the story needs LeBron to be a strict dad, focused on tutoring his son, Dom (Cedric Joe), to achieve his basketball potential rather than follow his dream of being a video game developer.

But even when LeBron realizes his mistake and has a breakthrough, his demeanor doesn’t change. He doesn’t soften or become more relatable. He may say he’s doing those things through dialogue, but doesn’t show them in his actions. But OK, LeBron isn’t a trained actor. As he says in the movie while declining a pitch from Warner Bros. and its algorithm (Al G. Rhythm, played by Don Cheadle), he’s focused on his game.

The game in Space Jam doesn’t make a whole lot of sense, but could be fun for video game players — especially those who aren’t really basketball fans. Major bonuses can be earned through style points, taking shots from the upper atmosphere, and making physics-defying buckets. It makes sense in Toon World, anyway.

And there are some fun cameos from basketball stars Diana Taurasi, Anthony Davis, Damian Lillard, Klay Thompson, and Nneka Ogwumike as superhuman video game versions of themselves on the Goon Squad opposition.

However, the real problem is that Space Jam: A New Legacy is more concerned with producing a two-hour commercial for Warner Bros.’ movie and TV properties. At times, it feels like a spin-off of 2018’s Ready Player One with many iconic characters in the background and occasionally in the main action.

Look in the crowd and see King Kong, Pennywise from It, Game of Thrones‘ White Walkers, and the rock ape from The Herculoids. (Deep dig there.) Is that Space Ghost floating in the sky? Is one of Al. G’s assistant coaches an Agent from The Matrix? “Easter eggs”? No, this is the whole Easter basket. Looking for the many characters in the background might be fun for second and third viewings, or if you’re just in the mood for such a scavenger hunt one night.

Yet this is a movie for kids and maybe they won’t mind all of that visual noise on the screen. They will likely enjoy this new Space Jam more than their parents, and maybe roll their eyes when their parents tell them how the first one was better.

Sorry, kids — the parents have it right. Michael Jordan and the traditional, 2D animated Looney Tunes were more enjoyable than LeBron and the digital, 3D versions of Bugs Bunny and his pals.