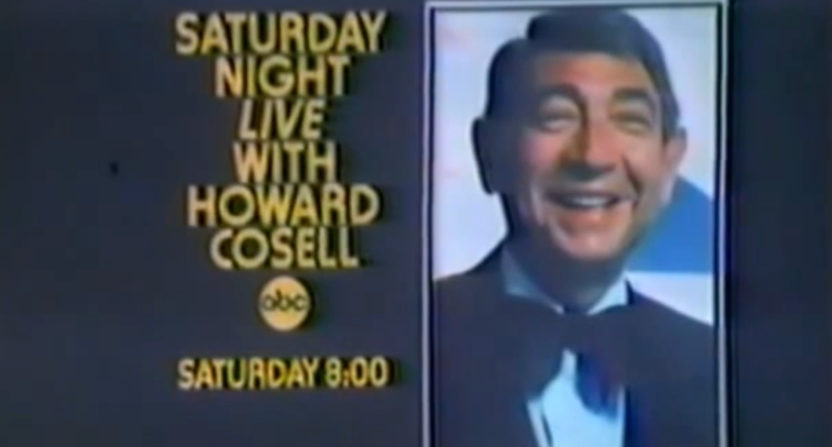 Earlier this week, we celebrated Howard Cosell’s 100th birthday by looking back at his patented Monday Night Football Halftime Highlights. While that was definitely one of Cosell’s career successes, let’s take a look at one of his career’s unmitigated disasters. Back in 1975, ABC greenlit a live variety show called Saturday Night Live With Howard Cosell.

ABC was thinking that due to Monday Night Football’s popularity and Cosell’s crossover appeal (he had made guest appearances on various shows like The Odd Couple), it would bring strong ratings to the network. In addition, ABC was hoping to revive the variety show which had died in the early 1970s. To top it off, ABC used the Ed Sullivan Theater in New York, the same place now used by CBS for its Late Show franchise, first with David Letterman and now with Stephen Colbert.

The network did a lot of promotion for the show, using its sports shows like Wide World of Sports and its primetime lineup in hopes of bringing viewers over. There was an article in People previewing the show and also questioning whether it could be successful.

“… the host of Saturday Night Live with Howard Cosell might say: this could be, ladies and gentlemen, and I mean this sincerely, the most extraordinary phantasmagoria in the recent chronicle of entertainment; or—and I say this because it must be said—it could very well prove to be an insult to the American intelligence and an abomination to the American eye.”

However, the show would go up against CBS’s powerhouse Saturday night lineup, led by The Jeffersons.

The problem was that Saturday Night Live With Howard Cosell tried to be a combination of things, and ended up as a variety show featuring interviews and a few sports crossovers. In addition, ABC Sports Executive Producer Roone Arledge made a major miscalculation thinking that Cosell would make a good variety show host. As Classic TV Sports noted back in 2013, Cosell’s strengths in ad-libbing and interviewing never showed during Saturday Night Live:

“Cosell was so nervous before the opening show that he wanted cue cards for backup despite the fact that he was legendary for doing his daily radio commentaries without notes or a script. That initial episode included Frank Sinatra, John Denver, Paul Anka, Shirley Bassey, Jimmy Connors, and the cast of The Wiz.”

Ratings never materialized for the show. The live aspect of the program led to problems, as some segments ran over. Arledge, who was successful in programming ABC Sports, had never produced a variety show. Director Don Mischer, who later became known for producing the 1996 Atlanta Olympics Opening Ceremony, The Oscars, and the Prince Super Bowl halftime show, said he regretted working on the Cosell show:

“(Arledge) said, ‘I’ve got a new show coming up with Howard Cosell. I’m hearing good things about you, can you come in and have a meeting with me about directing this?’ Then I ended up getting an offer to do Saturday Night Live with Howard Cosell, which was 8:00 to 9:00 p.m. on Saturday night, live from New York. Really high profile. They guaranteed me 18 shows, at $3,000 a show, which was big money. Then I got a call from a guy named Lorne Michaels who said, I’m starting a show called Saturday Night, its late-night, I’ll guarantee you eight shows. And I think it paid, like, $1,100 per show. So I chose Saturday Night Live with Howard Cosell, and I regretted that decision for a long, long time. Lorne never ceases to remind me of that when I speak with him.“

By October, one columnist wrote that the cancellation of Saturday Night Live With Howard Cosell was a “foregone conclusion.” The series’ last show was on January 17, 1976.

Thanks to Classic TV Sports, here are the show’s guest lists:

Because of the show’s short run, there aren’t any videos of any of the programs, but we do have a promo for the November 1, 1975 show: