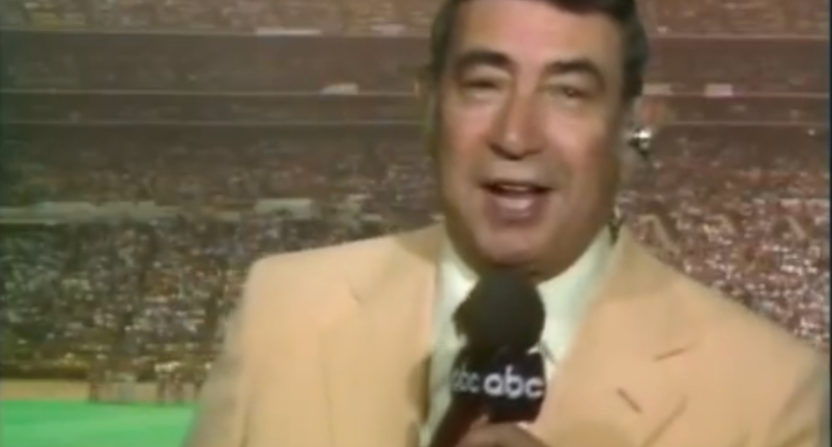 This weekend marked the 100th birthday of Howard Cosell, the sometimes polarizing, often-bombastic commentator who influenced sports broadcasting. His on-air partnership with Muhammad Ali brought both men into prominence. When ABC was awarded the contract for Monday Night Football, the network promptly put Cosell on the package, giving him a platform that reached millions of Americans.

It’s hard to imagine in this day and age of cable’s 500 channel universe, streaming services, Twitter, Facebook, Snapchat and other platforms that you can’t find a highlight, but back in the 1970s, your market may have had six to nine channels at most, so your source of sports highlights most likely was your local channel.

When Monday Night Football arrived, it started a feature showing highlights of selected games from the day before using NFL Films footage. Cosell would narrate and, using just a shot sheet describing each play, he would ad lib his way through two segments of highlights. And before ESPN, before NFL Primetime, before Football Night in America, before the plethora of local Sunday night sports shows, it was the only way to see the action around the NFL.

Fans would get angry if their team wasn’t shown. Monday Night Football producer Don Ohlmeyer milked it by saying Cosell chose the highlights which he didn’t. He would later utter a disclaimer that the highlights were chosen by MNF’s producers, but by that time, it was too late, fans felt Cosell selected which team would be shown each week. His distinctive voice, his flair for the dramatic and his ability to think on the fly all came through on the highlights.

Chris Berman would use some of Cosell’s catchphrases like “Look at him go!” and “He … could … go … all … the … way!” on Primetime as a tribute.

Let’s take a look at some of the halftime segments. In the early days, the segments would go well over ten minutes. But as the years progressed, they got shorter. But no matter how long they went, fans were glued to their sets to see the highlights from Sunday.

From 1970, here’s Cosell doing the highlights for Week 9:

Let’s go to 1973, with Cosell first recapping the first half of Oakland at Denver, going through the scores of the week and then the highlights, by introducing them “through the good auspices of NFL Films…”

Let’s go to 1975 with a highlight showcasing a man named O.J. Simpson. Notice that this week utilizes network footage from CBS and NBC:

Now to December 1977, and you can see plenty of defensive touchdowns. You can hear that Cosell is enjoying narrating the highlights with “Watch him go!” and his signature “Right there!”

And from Week 1 of the NFL in 1978, here’s Cosell narrating some NFL legends like Earl Campbell and Bubba Bean … wait, Bubba Bean????

The highlights would continue through the mid-1980s, but by that time, Cosell had left Monday Night Football and they would be narrated by Frank Gifford, but his presence wasn’t the same as Cosell.

Here’s Chris Berman paying tribute to Cosell during the 25th anniversary of MNF.

Cosell may have been known for his boxing calls, but it was the Monday Night Football halftime highlights which comprised some of his best work.