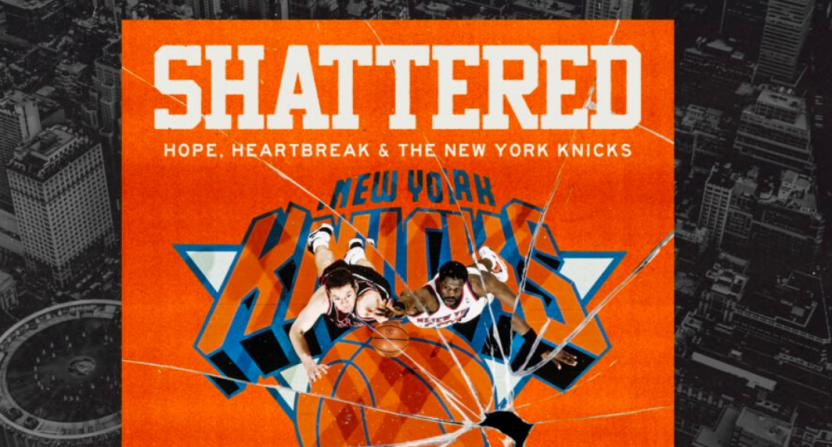 The Athletic's new narrative podcast does a deep dive on the last 20 years of the Knicks, from the '99 Finals to Melo to present day.

What’s It About?: If you’ve paid attention to the NBA for the past 20 years or so, you’re probably aware that the New York Knicks have not been very good in that time. It almost seems impossible for such a vaunted basketball franchise, which plays its games in Madison Square Garden, to be so bad for so long. And yet, the Knicks spent the better part of the last two decades finding new and creative ways to suck. The question at the heart of Shattered is “How?” And the answer at almost every turn is “Owner James Dolan.”

In fact, instead of the generic name it has, a much better name for this podcast might have been: This Is Literally All James Dolan’s Fault.

Over the course of eight episodes, Shattered works its way through the many eras and pivotal moments of the James Dolan Era, showcasing what was supposed to happen before revealing how those plans eventually went awry. From the collapse of the 1990s Knicks to the rise and fall of Isiah Thomas to the failed attempt at landing LeBron James and the “Melo” drama that followed, every problem that befalls the franchise always seems to lead back to James Dolan, his ego, and his inability to stay out of the way of people smarter or better equipped than him.

Who’s The Host?: Public Enemy’s Chuck D. The rapper, author, and producer has made a name for himself with narration and voice work over the years and he fits right into the role here. The fact that he is a lifelong Knicks fan who remembers watching the team win championships in the 70s adds a certain gravitas to his work here. While this podcast is attempting to document history as it happened, it’s also very much coming from the POV of Knicks fans who want desperately for the franchise to be good once more.

What’s It Like?: There’s a whole genre of historical or documentary podcasts these days, especially in the sports realm, that could unfavorably be described as “someone reading a Wikipedia page to you.” That’s not the case here and thank goodness for that. Shattered makes the smart decision to give the podcast a POV. It’s hosted by a diehard Knicks fan and features interviews with other diehard Knicks fans. It includes interviews with reporters who covered the franchise for years and aren’t afraid to speak their minds. It includes soundbites from former Knicks employees and players. All of this gives Shattered the ability to really capture the desperate nature and seething rage of modern Knicks fandom.

That’s not to say that Shattered doesn’t try to remain balanced. It doesn’t take unwarranted shots at people like James Dolan, Phil Jackson, or Isiah Thomas. It’s certainly critical but does the work to show you why. And had he wanted to, the notoriously thin-skinned Dolan could have sat down with the podcast to plead his case. But as outlined in the program and probably presumed by its creators beforehand, that didn’t happen in spite of their reaching out.

What’s left is a pretty clear case that while James Dolan does not control the universe, he is at the root of every problem that has occurred for the New York Knicks in the past 25 years. He is the decision-maker who made bad decisions at every turn. His ego only made things worse when it didn’t seem possible. And his inability to see the forest for the trees made it almost impossible for the franchise to recover quickly after every setback.

Ironically, Shattered premiered in a season when the Knicks were actually good. Now in the NBA Playoffs, the Knicks have a chance to end the era outlined in this podcast, making its release seem almost prescient. Of course, as Shattered makes clear, this is still Dolan’s Knicks, and when that’s the case, bad things are always possible.

Who Is It For?: One of the best audiences for Shattered would be young sports fans who only know a world where the New York Knicks are terrible. They might be shocked to realize just how good the franchise was for most of the 1990s and surprised to see how it all came undone. Anyone who has casually followed the NBA and is aware of the Knicks suckage, but doesn’t know all the details might be fascinated to hear just how deep this rabbit hole goes and just how bad it’s been.

Shattered is likely also a great listen for Knicks fans who hate themselves and want to relive this waking nightmare with many of the voices of fellow fans involved, providing some perspective and commentary that attempt to make sense of the madness that is being a Knicks fan.

Who Is It Not For?: James Dolan, who almost certainly has made an underling listen to this podcast, take notes, and make sure that all the people prominently involved in making this are no longer allowed at Madison Square Garden. (Maybe it was Johnathan Daly).

It’s also not for New York Knicks fans who don’t hate themselves… if they exist. We can’t imagine they’d want to subject themselves to reliving all of this.

Where Should I Start: It doesn’t really make sense to listen to this podcast out of order so you’ll want to start at the beginning. You need the context of how good the Knicks used to be to understand why the last 20 years have been so shocking.

So, Should I Listen To This?: Unless the idea of reliving the last 20 years of Knicks nightmares makes you want to walk into the ocean (which would be understandable), Shattered is a solid Yes for sports fans, especially New Yorkers who either want to know the answers or already know them and want to remind themselves why they dislike James Dolan so much.