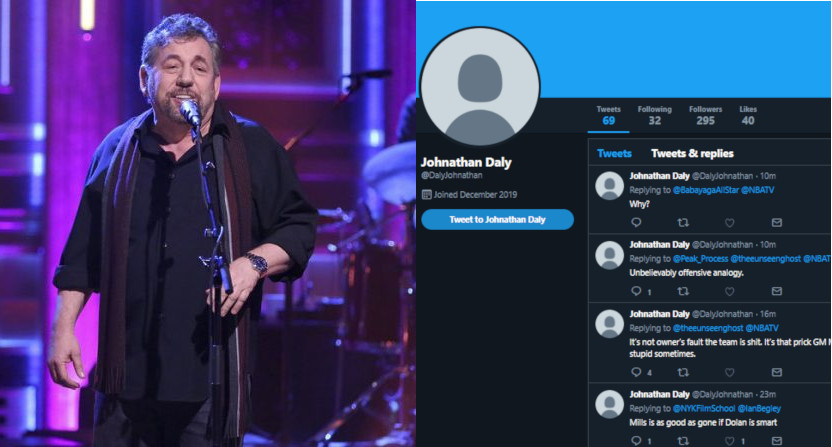 There’s been some fun reporting in the past on suspicious Twitter accounts that only seem to defend team owners, including the Ottawa Citizen ‘s Drake Fenton and Vito Pileci writing in November 2018 that a review they conducted “found at least 20 contrived Twitter accounts, seemingly created to launch a co-ordinated disinformation campaign and to attack media coverage of the Sens while lauding the team and its owner Eugene Melnyk.” As we wrote at the time, “none of this conversation managed to really make the Senators look better,” but the issue of suspicious accounts that only ever defend particular teams, players, executives or owners has not gone away. And an interesting one popped up Wednesday; the account of “Johnathan Daly,” which mostly appears to exist just to tweet defenses of New York Knicks’ owner James Dolan (seen at left with his “JD and The Straight Shot” band performing on The Tonight Show with Jimmy Fallon in 2018) and bash Knicks’ president Steve Mills. (Update: the account briefly disappeared Wednesday night, came back shortly after, then disappeared again Thursday, as noted by @TreyFromNY, who noticed the account early on Wednesday. It then came back later Thursday.)

The @DalyJohnathan account only started tweeting Wednesday afternoon, but quickly posted 70 tweets and replies, with most of those sent to media and fans who said anything negative about Dolan or the Knicks. Here’s the first tweet it ever sent:

James Dolan does not have much to work with. You should be thankful he’s been even this successful with incompetent help

How is James Dolan the problem?

Knicks fans should be thankful for an owner like Dolan.

That’s completely false. James Dolan has had to overcome a lot in his life and is a solid owner. I am a Knicks fan and am thankful for Dolan.

James Dolan is doing what he can with the doofuses around him in the front office holding the team down. Dolan is not the problem – I, as a Knicks fan, am a fan of James Dolan.

Get him some competent front office help and he will bring a championship to New York!

Another delusional hire by GM Mills. Maybe let James Dolan start making the hires. He seems to know a thing about making money and winning games.

If it was up to James Dolan, Donovan Mitchell would be a New York Knick and Ntilikina would be on the streets in France. GM Mills butchered the pick.

James Dolan has zero culpability in the Knick’s disappointing season. Blame the idiots in the front office with him.

How? Dolan is perfectly competent, but surrounded by idiots!

Really should have used the Scar GIF there, “Johnathan,” but maybe whoever/whatever (it’s possible it’s a program rather than a person here) is behind this isn’t really into memes:

At any rate, what’s also funny about this account is that its only two non-reply tweets (as of Wednesday afternoon) were a classic example of typing what you’re looking for as a tweet rather than a search: 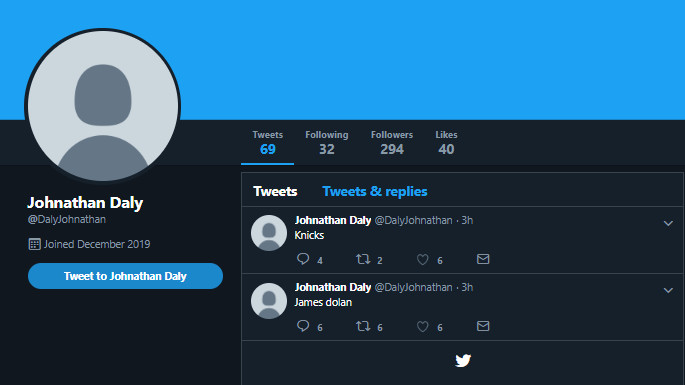 There isn’t currently any proof that this account is controlled by Dolan or anyone with the Knicks, or even any proof that it’s commissioned by them, but its content certainly seems odd. This account is more about constant Dolan promotion than even the actual burner accounts we’ve seen tied to figures like Bryan Colangelo (through his wife), Torey Hunter or Kevin Durant. And we know that Dolan is very, very concerned about how he’s perceived, to the degree of claiming critics have “ill will” and “vendettas,” going to war with a radio station over comments from one personality, keeping files on individual reporters, and calling Rupert Murdoch to get a critical FS1 subway ad pulled. And the Knicks as an organization have brought themselves bad PR in the past by needlessly rebutting others’ comments.

At any rate, whoever is running this account seems to think incredibly highly of Dolan in a way that almost no one else does. And creating an account to send almost 70 tweets defending Dolan and the Knicks in one afternoon is certainly a way to spend your time. But hey, whoever this is also likes The Muppets:

Well, that’s the most reasonable thing you’ve ever said, “Johnathan.”