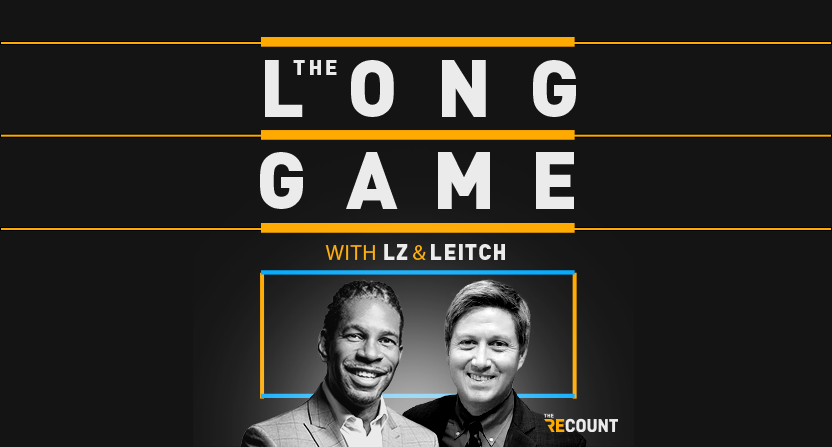 Will Leitch and LZ Granderson are well-known to many in the sports media world, Granderson for his 17 years at ESPN and his current work with ABC News and The Los Angeles Times and Leitch for founding Deadspin and the many things he’s done since, including current work for New York, MLB.com, and his own Substack. The two of them have now partnered on a podcast at The Recount called The Long Game, covering the intersections of sports, culture, and politics and the intersect. In a recent conversation with AA, they spoke about how this got started, what they hope to accomplish, how Deadspin was seen during Granderson’s time at ESPN, how Granderson had a David Beckham interview given to someone else by an ESPN exec, why they don’t believe in “stick to sports,” and much more.

Leitch said he had previously worked with The Recount’s co-founder and executive editor, John Heilemann, and was interested in doing something on sports with him. He said he got really excited when the idea of working with Granderson came up.

“I have worked with John Heilemann a lot, I worked with him at New York magazine and then I worked with him at Bloomberg around the 2016 election. That was the election where I thought, famously, ‘You know, I’ve been doing sports forever, it would be good to do something civically engaged, that would be good to make me feel good about the world and our place in it.’ I had always thought ‘Politicians generally mean well, and I will get a chance to see democracy from the ground up.’ And I covered the 2016 election, so I stopped feeling that way in short order.”

“I did do a podcast with John. That was one of his side projects during that time, called ‘Culture Caucus.’ It was partly sports, but it was mostly Heilemann having his celebrity guest friends come on, and he’s like ‘Will, do you have a question?’ and I was like ‘Oh my gosh, yes! Yes, Dave Navarro, how’s it going?’ So that was my contribution to that. But we had always talked about continuing to do something, continuing to work with him, and we had talked about maybe focusing on a sports thing, and the minute I found out that LZ could possibly be interested in this, I kind of lost it. I’m obviously a long-time fan.”

Leitch said it’s been tough for him to hide his excitement about working with Granderson, even in their first conversation.

“One of the things I’m really bad about in media, in sports media in particular, is saying ‘Yes, this is my colleague LZ Granderson.’ It’s like ‘Oh my gosh, I read their stuff all the time! I can’t believe I get to talk to them!’ I’m a fan, really more than I am anything else. So to get to talk to LZ, to get to talk to LZ for the first time, even, was pretty exciting. My first conversation with LZ was me desperately auditioning for him.”

“Basically, my first talk with him was like the old Chris Farley Show, ‘Remember that time, it was awesome! Remember that ESPN The Magazine piece, that piece was great!’ …The minute I saw that LZ could be a part of this, I was in for sure. If this was just LZ talking and me at the end being the hype guy, like ‘Yeah, that’s right, LZ!,’ I would have been totally, totally fine with that.”

And Granderson said that admiration from afar was true for him too.

“I have been a huge fan of Will’s for years and years and years. Who isn’t, right? To have the courage to create Deadspin, and dare to take on ESPN in this space, I was just amazed by that. And not a day went by where I didn’t check multiple times on the website. And obviously I’ve been reading him along the way. And even though we didn’t talk, I felt, like Will, that I was becoming more and more of a fan.”

Granderson said this podcast proved a useful way for him to remain in sports after leaving ESPN.

“Our first conversation with The Recount was well over a year ago. This was around the time that I was trying to figure out where I was going to go next after leaving ESPN. I decided to leave a little over a year ago, and I was like, ‘Okay, do I still want to be in sports?'”

“I had already things going on outside of sports. I was asking ‘Do I still want to be in sports media, and if so, how?’ I was always bored by the LeBron versus Jordan debates anyway, like Around The Horn or SportsNation when I was hosting it, but at this particular point, I was definitely not looking to go out and do more of the same things that I had been doing.”

And he said he got more interested in this project because of Leitch’s attachment, and their first conversation was amazing.

“He arranged for us to have a conversation, and I was in P-Town for the first time in my life, Provincetown [Massachusetts, a famed LGBTQ+ destination]. And, you know, I’m a gay, and I’m in P-Town surrounded by gorgeous men, and my conversation with Will is so fucking good that I can’t focus on these dudes around because I need to be doing a show with this guy.”

“We were on the phone for well over an hour, and during this hour, I am walking up and down Commercial, which is the main strip in P-Town, and I am walking back and forth because I don’t want to risk going somewhere and losing the signal, and I wanted to be outside, and it was like perfect, it was the perfect moment.”

“The way Will was talking about how we could talk about Tom Brady was the way I wanted to talk about Tom Brady, but couldn’t find any willing partners. It made my decision to leave ESPN feel even better, because what Will and I were going to do would not have been allowed there.”

Granderson said he read Deadspin avidly during Leitch’s time there, even though there were plenty at ESPN who complained about it. He said the outsider view meshed with some of his feelings about ESPN from the inside.

“There definitely were people who had things to say about it. And, as with Sports Illustrated, they were our competitors. But, you know, a funny thing happens to a person when they know they’re at the party but they don’t get a chance to dance with anyone. You view the party differently. While at ESPN, and I certainly was contributing to ESPN, I was always aware that I was diversity, but I wasn’t included. I was fighting for that. So the idea that I would be reading Deadspin while there was anti-Deadspin sentiment at ESPN didn’t really bother me, because in some ways, there was anti-LZ sentiment at ESPN too.”

He said that sentiment against him changed back and forth over time, but there were always hurdles.

Anti-LZ: “It ebbed and flowed with what the organizational structure was. ESPN, first of all, is so huge. I came in on the magazine side, which meant no one in television or audio really was aware of me. And over the years, because of the size of ESPN, I found myself sort of perpetually reintroducing myself to new producers and new decision-makers, and, in introducing myself, trying to justify my existence outside of being a diversity hire. A lot of people recognized that right away, but they didn’t recognize that I had been a journalist for a long time before I even got to ESPN.  They always seemed shocked I knew shit.”

Granderson cited one specific example of an executive taking a David Beckham interview he’d arranged and giving it to someone else.

“ESPN had just signed a deal with MLS, and we were going to lean all-in on that coverage. I had secured an interview with David Beckham. We had worked together, and so I knew him and knew his context, and once the deal was made, I was like ‘Oh, let me see if I can get an interview.’ I hit him up, and it was done. I kid you not, I forget the dude’s name, but whoever was in charge of MLS coverage hit me up and was like, and I can’t make this shit up, this dude hit me up and said basically ‘We know you have an interview with David Beckham, they’re only granting one interview for ESPN,’ and basically, they’re like ‘We want to take it from you and give it to somebody else.’

“And the first thing I thought was ‘So let me get this straight. You want an interview with David Beckham. An ESPN reporter has that interview with David Beckham, so what you want can be fulfilled. But you don’t want me to do the interview, so you want me to give you permission to let someone else do the interview.’ And, you know, what choice did I have? It wasn’t them asking, it was them informing. So I was just sort of like ‘Okay…sure,’ and someone else did that interview with Beckham, even though I got it through my own sourcing. And there were other things like that that I experienced over my time and always just sort of rationalized that I was playing the long game.”

Read on for more from Leitch and Granderson on Deadspin, on “stick to sports” arguments, and on their chemistry.