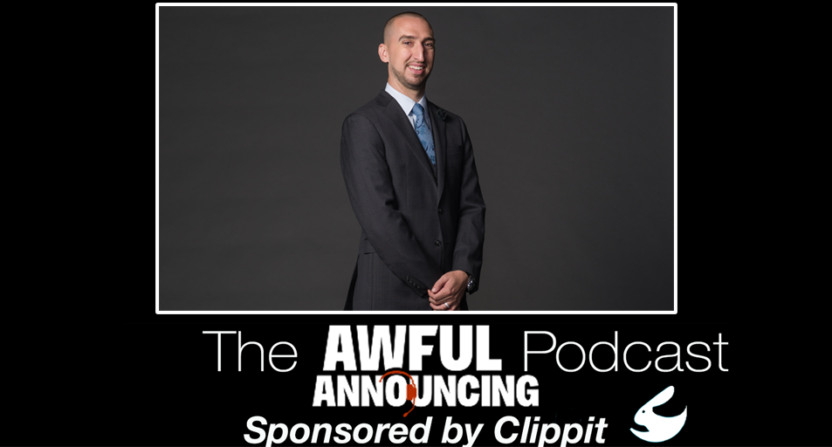 On the latest edition of the Awful Announcing Podcast, Ben Heisler is joined by FS1’s Nick Wright.

Here are some highlights of the interview with the former sports talk radio host and current First Things First co-host:

0:00-4:00: Before Nick Wright joins Ben Heisler, Joe from Chicago comes on and answer both questions correctly in our Clippit-sponsored trivia contest to land a $50 Amazon gift card.

4:00-16:00: Nick Wright explains how he got into the sports talk radio world, and how he originally wanted to do play-by-play or color commentary. But he ultimately learned his best fit was in sports talk radio.

“The ability to give your opinion in long-form on almost any topic that talk radio affords you, I instantly fell in love with it. And it fit my strengths, my argument strengths, my thought process strengths, more than just about anything I could imagine.”

Heisler and Wright also have a conversation on the idea of color commentary featuring a more “conversational element.”

16:00-24:30: Wright talks about hitting his stride as a radio host in Kansas City, and the tough decision to eventually move to Houston to host a radio show (and the support of his family to allow it to happen).

24:30-29:30: Wright talks about his time in Houston (“It wasn’t where I wanted to be forever”), and the desire to land a national job in New York or Los Angeles.

36:30-39:15: How long did it take Wright to realize that he could work well with Cris Carter and Jenna Wolfe on First Things First?

39:15-43:15: What’s different about First Things First from sports debate shows like First Take and Undisputed? Wright has a very passionate response to this one.

43:15-49:30: Wright explains why he spends so much time talking about LeBron James, “the greatest athlete in American history.”

“If there was a physics talk show in 1921, guess what, we’d talk about Albert Einstein damn every day. I happen to be hosting a sports show during the era of the greatest athlete in American history. So we’re going to talk about him a lot. I will unapologetically talk about him a lot, because we would be idiotic not to.”

54:00-55:52: Heisler and Wright close the show on the topic of gambling being more accepted in sports commentary.

Thanks to Nick Wright, as well as our friends at Clippit. You can download the Clippit app on the App Store and Google Play.

And don’t forget to subscribe to our podcast on iTunes.