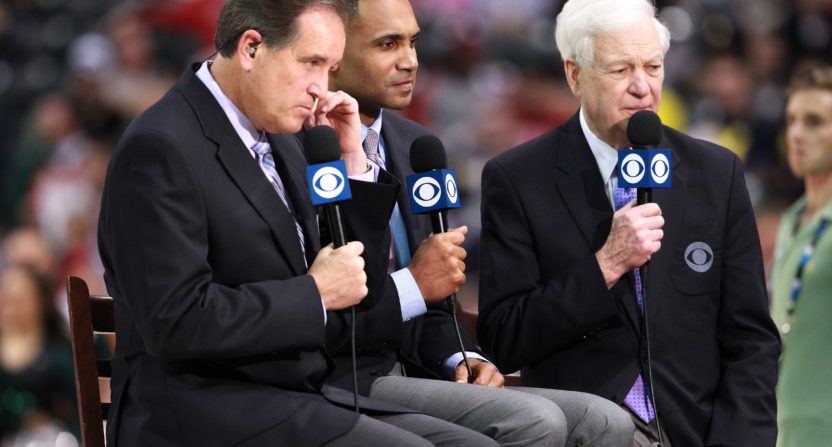 This Sunday, the NCAA Tournament Selection Show is airing on…TBS? Yeah, for the first time in the NCAA’s TV deal with CBS and Turner Sports, the Selection Show is making the jump to cable. We’ve known about this for weeks, and it still seems weird.

That got me to thinking about other pairings between sports, leagues, or events and the networks that air them, and which of those partnerships seem the most natural and iconic. What’s your choice: the NCAA Tournament and CBS? The NFL and Fox? The ACC and ESPN? Or something completely different?

We asked our staff, and here are their responses.

Andrew Bucholtz: I’m going to go with an unusual choice here and pick the NBA on TNT. They don’t have exclusive rights, with ESPN showing plenty of games each week as well, and they don’t have the Finals (which are on ABC with ESPN talent), but the class-leading studio show of Inside The NBA makes TNT’s NBA coverage iconic for me, especially as they’re one of the very few sports studio shows that has some fun with the topic instead of taking everything incredibly seriously. Turner also has excellent play-by-play voices, analysts, reporters and production values, and they’ve done well with spinoffs like Players Only as well, making the NBA a key part of TNT’s overall identity. It’s far from the only option to watch the NBA, but TNT’s coverage feels like the top NBA coverage to me, and it’s something that’s well worth checking in on regularly, a standard that not much sports coverage meets.

Ian Casselberry: I might be the wrong person for this question, since I still think the NBA was best on CBS (Dick Stockton and Hubie Brown!) and many reading this might not even have been alive then. (The NBA went to NBC after the 1989-90 season.)

But the strongest association between a sport and network for me is ABC with college football. I realize ESPN has kind of taken that over, but I still feel like if there’s a big game in college football (SEC notwithstanding), I expect it to be on ABC. (And a part of me still expects/hopes Keith Jackson or Brent Musburger to be calling the broadcast.) Even now, with ABC and ESPN sharing coverage based on region, it feels a little bit more special to me if a Michigan game is on ABC, rather than ESPN.

This feels especially true for the Big Ten and Pac-12 (I’ll throw the ACC in there too, though I came to that conference later in life). Watching those conferences on Fox last season just didn’t feel quite right. Hopefully, I’ll be more acclimated this year. And I still think the BCS on Fox was something that didn’t really happen, but a dream that shows I think too much about this stuff.

Matt Clapp: For me, it’s easily the NCAA Tournament on CBS.

The closest to me would probably be the NBA on TNT, but NBA regular season and postseason games are shown on ESPN, ABC (The Finals), and NBATV. In MLB, Fox is the only network that has the World Series, but the postseason also airs on TBS and MLB Network, and I’m old enough to remember when the World Series was on CBS and All-Star Games were on NBC. The Masters on CBS is certainly a good one, but now the first two rounds are on ESPN.

But I just can’t picture anything but CBS when it comes to the NCAA Tournament. Yes, it’s now shown on Turner networks TBS, TNT, and TruTV as well, but with the same presentation. I’m trying to imagine watching the first weekend of the Tournament on ABC, Fox, or NBC, and… can’t. I hear the CBS theme song playing in my head when I just think of the NCAA Tournament.

I think of Tyus Edney going coast-to-coast vs Missouri, Christian Laettner hitting the turnaround jumper vs Kentucky, Bryce Drew hitting the miracle three to take down Ole Miss. And of course, One Shining Moment.

It’s all CBS, and it will feel like the bizarro world to me if the tournament ever goes to another network.

Ken Fang: Since Matt took my answer, I’ll go with the SEC on CBS.

During college football Saturdays, there’s nothing like kicking back on the comfy chair with a beer, knowing that the 3:30 p.m. ET window will include the Southeastern Conference. Dating back to 1996, the package became synonymous with Verne Lundquist and his two partners, Todd Blackledge and Gary Danielson. And while Uncle Verne no longer calls the SEC, it just seems his presence is still felt on the package. There was a seamless transition in 2017 to Brad Nessler who had a reunion with his old ESPN partner Danielson.

There’s a big event feel each week no matter if the game is in Auburn, Baton Rouge, or Tuscaloosa. The SEC on CBS just says “College Football” to the fan. CBS does a great job in capturing the atmosphere from each stadium and the matchups help as well. It’s one reason why the package is at or near the top of the college football ratings each season.

Joe Lucia: Fox Sports gets a lot of shit, rightly or wrongly, from this site and many others, about its programming choices and coverage style for the various sports it has the rights to. But the network has aired the NFL for nearly 25 years, and there’s no network that I personally associate with the league more than Fox. CBS didn’t have the league’s rights in the mid to late 90s, right when I was coming of age and watching the league every week, and NBC didn’t have the league’s rights for nearly a decade from the late 90s to the mid 2000s. Fox has been a network constant for multiple NFC games every Sunday in the fall, and they’ve also had a shocking lack of turnover in their pre and post game shows that’s helped breed familiarity with the network’s coverage.

Alex Putterman: I’m going to give myself up as an ignorant 90s baby here, but I’ve never watched a World Series that wasn’t on Fox, and it’s hard for me to imagine what one would even look like. Baseball fans never really asked for Joe Buck to become the television face of their sport, but he has now called each of the last 18(!) World Series and will call at least the next four. When you close your eyes and imagine the World Series on TV, you hear Buck’s voice and the Fox theme music. At least for people under a certain age, Fox and the World Series are inextricable.

Jay Rigdon: The shifting nature of rights in recent years has robbed me of two of my favorite things: ESPN’s World Cup excellence that began in 2010 and carried through 2014, and ESPN’s fantastic wall-to-wall coverage of the Open Championship every year. FOX and NBC have those events respectively, and while NBC’s Open coverage has been fine and FOX’s first men’s World Cup is on deck, it’s still not the same for me.

So I’ll go off the board a bit and point out that the only way I ever get to watch European Tour golf is on Golf Channel. Granted, they’re not really producing their own coverage, merely broadcasting a Sky Sports or other European feed, but it’s an invaluable service for me, an American stricken with both chronic insomnia and an addiction to watching golf from all over the world. Watching players hit shots in Dubai while it’s the middle of a January night here in Indiana is the kind of thing that helps me stave off both seasonal affective disorder and golf withdrawal; in my case those two things might be synonymous.

It helps that the European Tour coverage is often everything PGA Tour coverage isn’t: filled with minimal narrative and plenty of live golf shots in rapid succession, a quick pace of play, exotic locales from a truly global tour, and no Nick Faldo. Even if Golf Channel is just the middleman, they’re providing a hell of a service, and I’m thankful for it.

Matt Yoder: My choice is The Masters and CBS… for better and for worse.

It’s unique in that the tournament has a one year contract with the network that keeps getting renewed. It means The Masters has an unusual amount of power in regards to the telecasts. That hasn’t always been a good thing like the historically limited coverage, (It took us until 2002 to finally see all 18 holes on Sunday! 2002!), the ban of Gary McCord, and the consistent use of “patrons” or “second cut.” Then there’s the controversy Augusta National itself has endured over the years.

But then I think about all the iconic Masters moments, the pictures from Augusta at the dawn of spring, and the famous Masters soundtrack and as a golf fan you can’t help but get nostalgic. CBS has broadcasted the Masters since 1956. The broadcasts have literally been a part of my life for 30 years. In spite of the controversies over the years, it doesn’t get any more iconic than that.