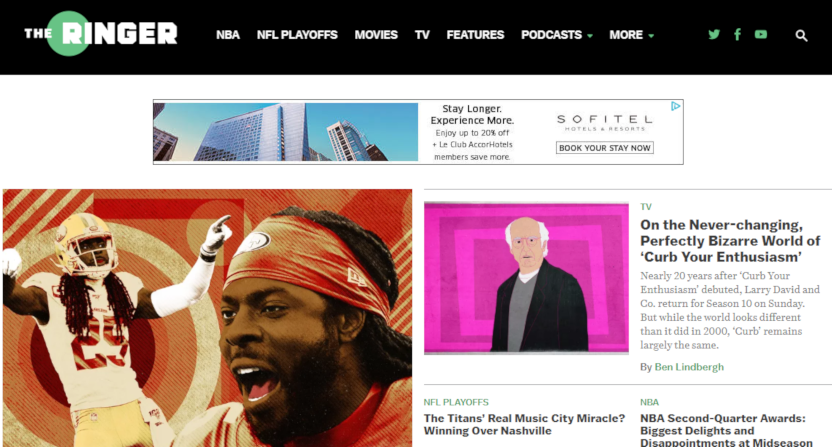 It looks like Spotify’s acquisitions of podcasting-focused companies (including Gimlet Media for $230 million in February 2019, Anchor for another $114 million that month, and Parcast for $56 million the next month) may soon head into the sports realm with the Bill Simmons-founded The Ringer. Anne Marie Steele and Benjamin Mullin of The Wall Street Journal reported Friday that Spotify is in “early talks” to buy The Ringer (home page on Jan. 17, 2020 seen above). While the WSJ sources cautioned that talks are early and may not result in a deal, it’s certainly significant that Spotify is contemplating that kind of an acquisition. And The Ringer’s podcasting content (which is presumably mostly what Spotify cares about) is seen as key to its value, as that article notes:

Though the Ringer’s website doesn’t draw as many visitors as some of its largest competitors, such as ESPN and Bleacher Report, its podcast network generates significant revenue. The Ringer’s podcast revenues exceeded $15 million in 2018, The Wall Street Journal reported, and the company is profitable.

The cited WSJ report there (from January 2019) has some fascinating details on that revenue, with The Ringer at that time charging between $25 and $50 for every 1,000 people who heard an ad on their podcasts and the site averaging over 35 million podcast downloads per month in the fourth quarter of 2018. And interestingly enough, that piece also featured Simmons saying he wasn’t looking for outside investment at that time. With talks of an acquisition now out there, it appears that has changed.

Bringing in The Ringer may make some sense for Spotify. It certainly fits with their strategy of acquiring podcasting companies and with their emphasis on podcasts; those of us who don’t have Spotify Premium have heard an awful lot of Spotify ads lately for podcasts they own, like Reply All (part of the Gimlet acquisition). And The Ringer has done very well in the sports and pop culture podcasting space, with everything from Simmons’ podcast to Ryen Russillo’s (bringing in someone from ESPN full-time is not insignificant) to pop culture things like Binge Mode and their Game of Thrones coverage.

This is still all obviously very preliminary, with it being “early talks” and all, but an interesting question with these talks may be what happens to The Ringer’s website (and specifically, to its written content that’s not just there to promote podcasts). Yes, it may not be as high on visitors “as ESPN and Bleacher Report” (it’s worth keeping in mind that those are two giant companies in their own right that are part of even larger companies in Disney and AT&T), but The Ringer has a lot of talented writers and has produced some very good pieces. But if they wind up owned by an audio-focused company, it’s easy to see the written side being deemphasized.

It’s also notable that this WSJ report led to some tweets from Recode’s Peter Kafka, who both added that he’d heard about Ringer/Spotify talks (he couldn’t confirm them, but another reporter also hearing of this adds to the credibility of the WSJ piece) and that he’d heard of some previous Ringer acquisition talks with Turner/AT&T:

Heard last fall so may have been kicking around for a while. Overwhelming majority of ringer revenue is podcasting, so logical acquirers are a small group.

Can’t remember proposed valuation but believe less than the $230mm Gimlet sold for.

At any rate, this is all pretty early, and there’s certainly no certainty The Ringer will be sold to Spotify. Maybe they will be, maybe they’ll be sold to someone else, or maybe they won’t be sold at all. But it’s notable to hear of these discussions, and they could certainly wind up being a big deal for both The Ringer and Spotify.