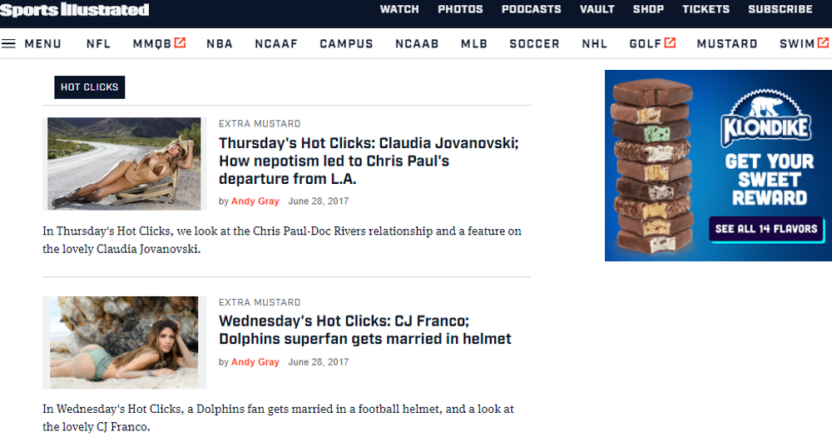 Andy Gray is a senior editor at Sports Illustrated, who (as per his LinkedIn profile) writes the Hot Clicks column (pictures of scantily-clad women combined with sports links), manages the Swim Daily section (ibid, minus the sports links), manages their Extra Mustard sports and culture vertical and manages the SI Vault Twitter account and the SI photos blog. On Wednesday, just as the news that MTV was laying off many of its writers and getting out of longform and reporting to focus on video and short culture pieces (similar to what many other companies have done in the past weeks) was breaking, Gray decided to weigh on on the layoffs and opine that no one wants to read longform anyways:

I’ve been in digital media for 12 years. One thing I’ve learned is that nobody wants to read anything over 1,000 words. MTV is more proof.

Even before any discussion of the merits of that opinion, Gray’s timing (essentially, telling talented people whose work was widely praised that no one read their work, and doing so right as they were being laid off) alone provoked a lot of backlash from writers across the web over the next 24 hours. But the most notable backlash came from Gray’s own SI colleagues, which makes sense, considering all the 1,000-word-plus stories that publication does. Here’s some of it:

Our best-performing story yesterday was a 5,000 word piece on Vince Young.

Sure wish @SI_LeeJenkins would do less reporting, pack fewer details into his stories, and get them down to 1K words. https://t.co/KBzbGWe9lY

Monty, Ryan Anderson, Robert Swift — all would have worked better at 750.

Apparently I wasted two-plus decades of my life. Good to know,

Plenty of writers, editors and others outside SI roasted Gray, too, with some providing data about just how well some long stories have done:

My story on Becca Longo from 2 weeks ago–about 3k words–got over 1.6 million reads.

here is a chart showing the share numbers of WIRED stories by length for the last year pic.twitter.com/noOSDpr44O

The dude who said no one reads stories over 1k words works at SI. The most popular SI stories for the past 6 months are 3k+ pic.twitter.com/PnUZriZxO4

Except the New York Times, where half of the most viewed articles at the moment are over 1000 words. https://t.co/JX74piq85m

I've been in <industry> for <period of time>. One thing I've learned is <broad generalization that supports my personal hobby horse>.

Gray eventually (sort of) apologized for offending people, without recanting his assertion:

But Hoffman might have hit the nail on the head about the whole argument:

Short stuff can be good too. Sometimes it's better. But there are no cookie cutters that apply to interest. None.

That’s exactly right. Some long pieces go unread, or only partly read, especially if there isn’t enough substance to fill out the story length. Others are widely-read, widely-shared and loved. It’s the same with short pieces. And pretending that all readers have the same interests or the same tolerance for story length is a bit silly. John Carvalho makes the valid point that it’s often hard to monetize longform today, and that there’s sometimes more love for it inside the industry than outside, but the above data also shows that the right long piece can definitely find incredible amounts of traffic.

Thus, Gray’s initial assertion that “nobody wants to read anything over 1,000 words” is undisputedly factually incorrect; there’s certainly an audience for longer pieces in general, and a big audience for the right long pieces. Yes, some people prefer shorter content, but some of those people will read the right longer piece. And even some of those who like longer pieces will be annoyed by ones that waste their time. So, there’s no universal prescription for piece length, and anyone who claims there is seems a bit silly, even if they’ve spent 12 years doing things like editing Swim Daily and writing Hot Clicks.

And beyond the merits of Gray’s argument, he unquestionably picked a bad time to drop this hot take, and drop it in such a over-the-top manner. If you want to argue for the merits of short-form content, that’s great. If you want to argue for only longform that deserves to be long, that’s great. If want to argue against all longform, as Gray did, that’s not so great, but that can be done; you might not want to do it right as a bunch of well-liked longform writers are losing their jobs, though. There’s clearly an audience for Gray’s work, but there’s an audience for the longform many of his colleagues do as well, and an audience for the longform many other writers do. This was some rare intra-publication Twitter drama, but it’s hard not to take the side of those criticizing Gray’s take.