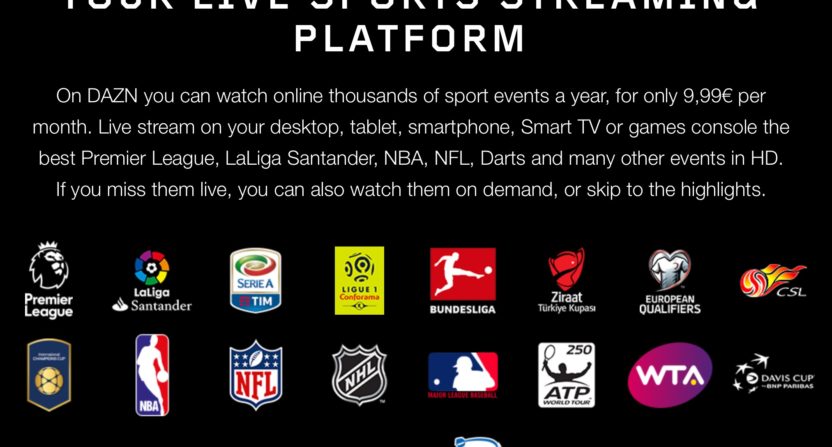 Canadians who love the NFL have been watching professional football like Americans, either through broadcast and cable TV outlets (CTV/TSN), NFL Sunday Ticket (available on cable in the Great White North), or NFL Game Pass on NFL.com. But that’s going to change for the 2017 season and beyond.

A streaming service based in London called DAZN (pronounced “Da Zone”) has purchased the Canadian digital rights to the NFL, meaning that pay TV providers won’t carry Sunday Ticket anymore. DAZN purchased the rights to the NFL and will allow fans to watch all games over the top without the fear of blackouts. On NFL Sunday Ticket in the States, local games are blacked out to protect the local station’s broadcast.

The price for an entire season of NFL games on DAZN will be Can$150, or it can be paid at Can$20/month. There will be a 30-day free trial.

DAZN is available in Austria, Germany, Switzerland, and Japan – but not Canada. It’s expected to launch in Canada in time for the NFL preseason next month, marking the service’s first expansion into North America. It provides sports and other services to smart TV, mobiles, tablets, set-t0p devices, and game consoles.

DAZN tells the Toronto Sun it will not distribute the NFL in Canada to traditional TV platforms and will keep the rights for itself:

“Your average fan should think this is like Netflix,” Alex Rice, DAZN’s managing director of strategic partnerships, said Thursday in a phone interview from England. “It will be available on all the major connective devices, including all the major TV manufacturers.

“In very simple terms, all games will still be available on your TV, if you have a connected television … We’re very big on the living room experience.”

CTV and TSN will continue to air the NFL on traditional TV through Sunday doubleheaders and all primetime games on Sunday, Monday, and Thursday nights.

Subscribers to Sunday Ticket on cable in Canada paid more than $30/month to watch the NFL, but had to endure blackouts.

DAZN says it has rights to offer other sports in Canada and says it will do so for no extra cost.

Last month, New England Patriots owner Robert Kraft said that over the top was the future of the NFL so this relationship with DAZN is part of that strategy. The league wants to gauge how Canadians flock to DAZN and how it may translate to the United States in the next media rights contract.