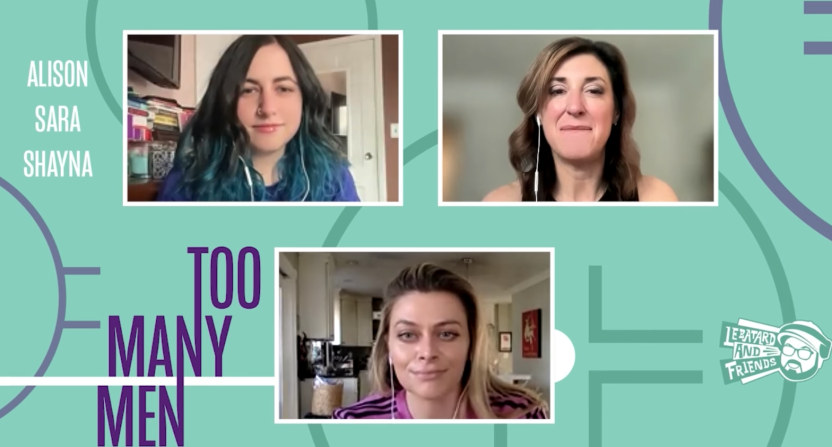 If you’re looking for fresh, smart, and fun hockey talk, check out the Too Many Men podcast. It’s hosted by Sara Civian, Alison Lukan, and Shayna Goldman and is part of Meadowlark Media. Recently Awful Announcing caught up with Civian, who also writes for Bleacher Report, to chat about the podcast, NHL season, and other topics.

AA: How did the podcast come together?

Sara Civian: “We all met while working at The Athletic. Alison was a reporter for the Columbus Blue Jackets. Shayna does a lot of stuff with analytics. I was the Carolina Hurricanes beat reporter. We became friends and had this group chat. We’d always vent and crack jokes. During the pandemic, we were bored and kept talking every single day in this group chat. We were like, we already have a podcast name.”

At the risk of asking an obvious question, can you elaborate on the name of the podcast?

“It’s a double entendre. Too many men being a penalty and, of course, the fact that we’re three women in hockey, a male-dominated field. Sometimes you look around in the press box and the locker room, and there are too many men. We like to bring on female reporters who have inspired us in our careers and interview them. We like to have a lot of women, whether they’re players, or personnel or reporters come on and chat about their lives in hockey and how we can make it more inclusive.”

Is there someone who inspired you?

“Kendall Coyne, of course. She played (at Northeastern). I was a huge fan, growing up in Boston. I always watched her and her bright-colored hair (bands).  I loved watching Zdeno Chára growing up. And obviously, Katie Strang. She is one of my close friends at this point. I always looked up to her and it was unbelievable that we were ever colleagues.”

Our thoughts on the Ivan Provorov situation + the Flyers/NHL's response:

What did you think of the NHL’s response to Ivan Provorov’s refusal to wear a Philadelphia Flyers’ Pride Night jersey?

“It’s tough to say what the NHL actually can and should do considering labor laws, etc. You also can’t force someone not to be homophobic. But all of us working in and around the NHL need to loudly support the LGBTQ+ community and make it clear that homophobia is not acceptable. John Tortorella failed to do so in his first comments and his follow up.”

How have fans reacted to the digital moving ads?

“I’ve seen a lot of complaints. Beyond the inherent distraction of the rotating ads, the number of glitches makes it 10 times worse. It’s something we might all get used to eventually, but it’s pretty annoying.”

“It’s Connor McDavid. The scary part about him is that it seems like he keeps getting better and you don’t know where his ceiling is. I hope he gets on a good team soon so we can watch him sell the playoffs for years to come.”

Can you make a legit argument that the Tampa Bay Lightning won’t reach a fourth straight Stanley Cup Finals?

“Yes. I think they’re getting older. The East is absolutely stacked. It’s a really tight race. All it takes is Andrei Vasilevskiy getting off his game for their chances to diminish.”

How big of a disappointment have the Florida Panthers been?

“I always go back to that (Sergei) Bobrovsky contract. I think that was a little too much. All of the eggs in one basket. And now they have the new, younger goalie (Spencer Knight) who’s pretty good. They can’t really make moves around him or anyone right now so they’ve got to go with what they’ve got. I didn’t love the Paul Maurice hire. I didn’t hate it. But I thought Andrew Brunette would be a good guy to rally around.”

Which team has the best goal song and which has the worst?

“I think the Sabres (have the best) because they let every individual player pick a song. Tage Thompson’s is Fishin’ In The Dark by Nitty Gritty Dirt Band. and we’ve heard that a million times this season. (The worst) is probably the Toronto Maple Leafs. I’m not here for Hall & Oates’ You Make My Dreams.”

What criteria do you use for your player style rankings?

“It’s kind of a trial by fire and whatever I feel like that day. I try to have more of an objective eye. Nikita Zadorov of the (Calgary) Flames called me out a few weeks ago because we have different senses of style. It made me step back and think. Maybe he isn’t always my cup of tea with double-breasted suits. But I appreciate his efforts and dedication. He’s made the list a few times.”

Style Rankings are BACK and there are a couple of familiar faces at the top of the list ? @SaraCivian https://t.co/1TuAGBGzBK pic.twitter.com/FL4hRmdXhK

“(My friend and I) were screaming our hearts out at Gillette Stadium during the Reputation Tour in 2017. (Swift’s) mom was walking around and came up to us and said ‘Do you want to meet my daughter?’ …I never get starstruck. I hugged her and said ‘Holy shit, it’s Taylor Swift.’ She laughed. I told her that her Reputation album inspired me and got me through tough times. I had just left my job in Pittsburgh. She said, ‘I was so worried that the album wasn’t going to be relatable.’ I said, ‘As a woman in sports, it was relatable to me.’ She said that meant a lot. Also, (Swift) smelled like heaven. I need to find out what perfume she was wearing.”