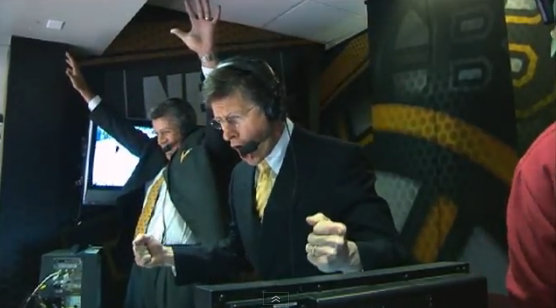 The decision to allow game announcers to travel for road games is one being made by each broadcaster. In the NHL, that decision varies by market based on the ever-evolving situation related to the Covid pandemic and ongoing concerns about safety, health, and finances.

NESN is another regional network that has made the decision to keep its announcers in town when their team, the Boston Bruins, hit the road. That’s a decision that has made calling games harder for Jack Edwards, who has called Bruins games since 2005. And after having to call road games from afar for multiple seasons now, Edwards is voicing his frustrations over the setup.

Edwards recently spoke with The Athletic’s Fluto Shinzawa about the situation, noting that it’s not just him who is having a hard time with it.

“I hear it in many announcers’ voices when they’re calling games from the studio. I’m not alone in this,” Edwards said. “It’s frustrating. But as the saying goes, that decision is made way above my pay grade.”

Edwards said that he has voiced his frustrations internally but the decision appears to be locked in stone for the remainder of the calendar year.

“The captains of the ship have determined that this is the way we’re going to chart our course,” Edwards said. “I’m going to do the best job I can. I have benefited from their acceptance of my protests. They’re doing what is best for NESN. That’s their job.”

Edwards also pointed out that he does not have ill-will for the people who run the network and was very appreciative of the fact that they’ve been able to operate under the current conditions without laying off employees.

“We had done eight hockey games in the previous 10 months. You can imagine what that did to the bottom line,” Edwards said, referring to the start of the 2020-21 season. “To their credit, NESN laid nobody off during the pandemic. That is remarkable humanity, especially in the broadcast world, where an entire competitor shut down. NBC Sports Boston vanished. Nobody lost his or her job at NESN. I trust them. I respectfully voiced my opinion, sometimes too loudly for their ears. But they have the best interests of everybody at the network in mind when they take these actions. They know I’m not going to like it. But they tolerate me.”

Shinzawa notes that NESN “intends to reassess road travel at the beginning of 2022,” though it’s unclear what that means. There are also rumors abound that regional networks like NESN could get rid of paying for crew road travel altogether as a cost-saving move. That’s not the ideal scenario for a lot of people, especially announcers and analysts, but it does sound like at least some of them will have to settle into this new way of doing things or find another place to do it.