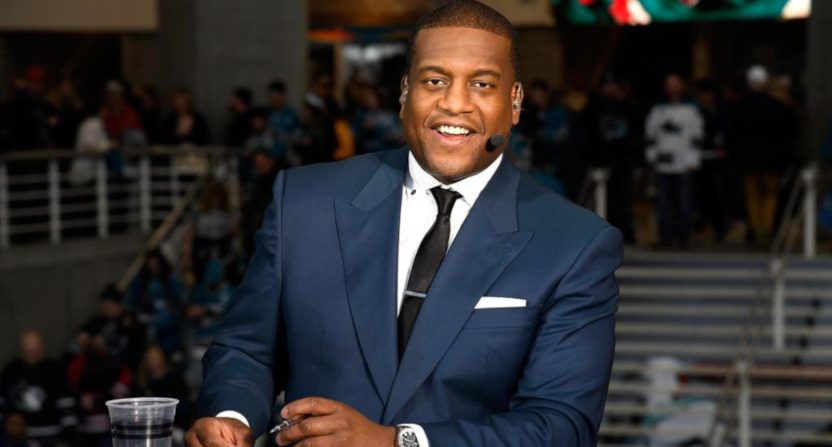 The additions to ESPN’s and TNT’s hockey coverage ahead of their first season with NHL rights this fall continue, and they continue to be a lot of familiar names. The latest ones noted are Kevin Weekes (seen above in a photo from one of his NHL.com pieces), AJ Mleczko Griswold, and Ryan Callahan at ESPN, and Anson Carter at Turner, as noted by Craig Morgan of AZ Coyotes Insider (who’s been in the lead on a lot of recent NHL broadcasting reporting):

Andrew Marchand of The New York Post then wrote a piece confirming Weekes’ hiring at ESPN, and mentioning that Bob Wischusen (currently a college football voice there) is likely to do some play-by-play for ESPN NHL games as well:

The latest signing is Kevin Weekes to ESPN as a studio and game analyst, The Post has learned.

Weekes, 46, is currently an analyst on NHL Network.

…In other ESPN NHL news, the network also plans to use Bob Wischusen as a play-by-player, according to sources. Wischusen, who does college football and hoops for ESPN and is the radio voice of the Jets, called about 25 Rangers games per year as the TV and radio backup in the early 2000s.

Marchand also adds that the lead ESPN NHL play-by-play role still appears likely to go to either Steve Levy or Sean McDonough. But that’s not decided yet, while these hires appear to be. And they’re an interesting group. Weekes played in the NHL from 1993-2009 and has been covering the league since, joining CBC’s Hockey Night In Canada coverage that fall as a game analyst and working for CBC and NHL Network since then. Mleckzo Griswold played collegiately at Harvard and played for the U.S. women’s Olympic team, including in their gold-medal win at Nagano in 1998 and in their silver finish in Salt Lake City in 2002, and she’s worked as an analyst for NBC on both Olympic and NHL games. Callahan is newer to the broadcasting scene, as he only retired in 2019 (well, technically in 2020, but he was on long-term injury reserve in 2019, and signed with NHL Network that fall), but he’s become a recognizable face for NHLN. And Carter has been broadcasting for NBC since 2013, and has won plenty of plaudits there.

So far, at least, it seems like U.S. national NHL coverage is going to look quite a bit different next year. Yes, many of the former NBC figures will still be involved, especially at Turner (their lineup includes Kenny Albert and Eddie Olczyk, is expected to include Keith Jones, and now adds Carter as well), but even the mix will be significantly different there, especially with Wayne Gretzky coming in as a studio analyst. And ESPN is still adding some NBC figures, including Brian Boucher and now Mleckzo Griswold, but they’re also getting people from other hockey broadcasting backgrounds, including Ray Ferraro from TSN, Leah Hextall from Sportsnet, and now Weekes and Callahan from NHLN. We’ll see how it all turns out, but we now know quite a few of the people who will be involved for both networks.