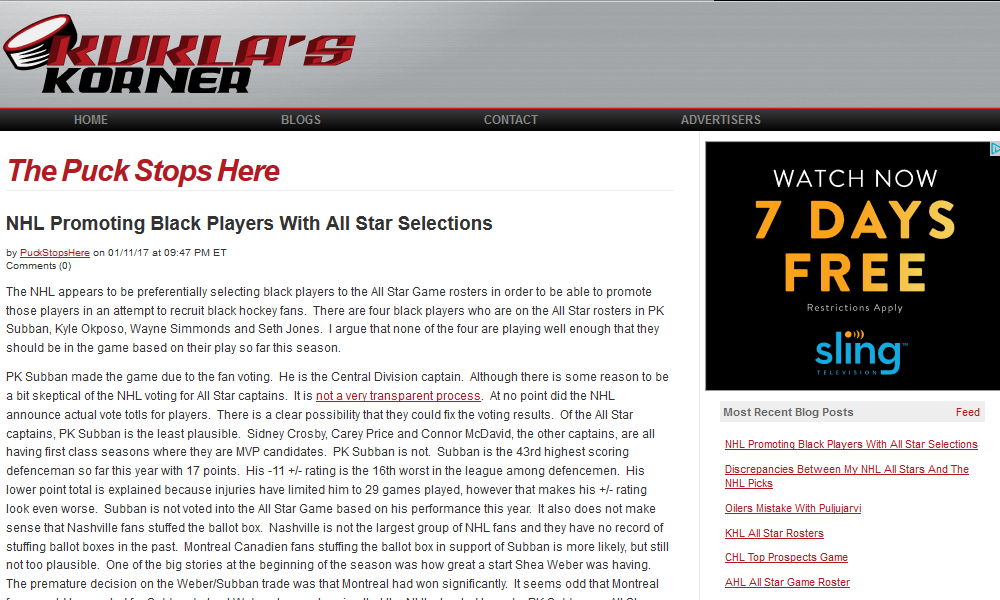 A good way to make sure you no longer have a prominent hockey blog is to write a typo-ridden, poorly-argued post accusing the NHL of “preferentially selecting black players to the All Star Game rosters.”

That’s what the anonymous author of The Puck Stops Here, a blog hosted on the popular site Kukla’s Korner, did Wednesday night. That post has since been deleted, but here’s a cached version (via Barry Petchesky of Deadspin). Some of the highlights of this particular lunacy:

The NHL appears to be preferentially selecting black players to the All Star Game rosters in order to be able to promote those players in an attempt to recruit black hockey fans.  There are four black players who are on the All Star rosters in PK Subban, Kyle Okposo, Wayne Simmonds and Seth Jones.  I argue that none of the four are playing well enough that they should be in the game based on their play so far this season.

PK Subban made the game due to the fan voting.  He is the Central Division captain.  Although there is some reason to be a bit skeptical of the NHL voting for All Star captains.  It is not a very transparent process.  At no point did the NHL announce actual vote totls for players.  There is a clear possibility that they could fix the voting results. …

The other three black players on the All Star roster wee announced yesterday and none are players who should be there based on their play this season.

…I think that the fact the NHL seems to have preferentially added black players to the All Star rosters when none should have made the team on their own merits is suspicious.  It is quite likely that they are being added in an attempt to market the game of NHL hockey to black fans.

The analysis here is really superficial (points and plus-minus) and overlooks a lot of the things the selected players do do well. Complaining about all-star game selections is a time-honored tradition, of course, but if you’re going to drop this kind of incendiary logic, you might want to have a little more backing it up.

(Update: this isn’t the first time this blogger has created controversy. As passed along by Joel Gasson, he wrote a post criticizing the suspension of players for gay slurs a few months back.)

In any case, this argument certainly didn’t end well for this blogger. Paul Kukla, who runs the overall site, wrote an apology post Thursday morning discussing the post’s deletion and saying that the author in question would no longer be allowed to write for Kukla’s Korner.

First off, the author of The Puck Stops Here will no longer be allowed to write again for KK.I take full responsibility for it being allowed online and I am sorry for that.  He has been writing for quite some time and I have no idea why he decided to write what he did, but he did.

It does not reflect my beliefs and I was disgusted with the topic itself.  I see hockey players in one way only, they are players.  Race, gender, etc. do not come into play in my mind, just hockey.

…Many of you now have had your requests met, TPSH is no longer on KK.

-I do not delete posts, but this time I had too.  I am still shaking my head, trying to wrap my mind around what TPSH was trying to accomplish.

Same here. Questioning all-star game selections is one thing, but accusing them of being racially motivated is something else entirely, something that opens up a whole new can of worms and something that seems ridiculous to do without a much stronger case than this blogger provided. Not a smart move, unless you’re trying to turn your hockey blog into an ex-hockey blog.