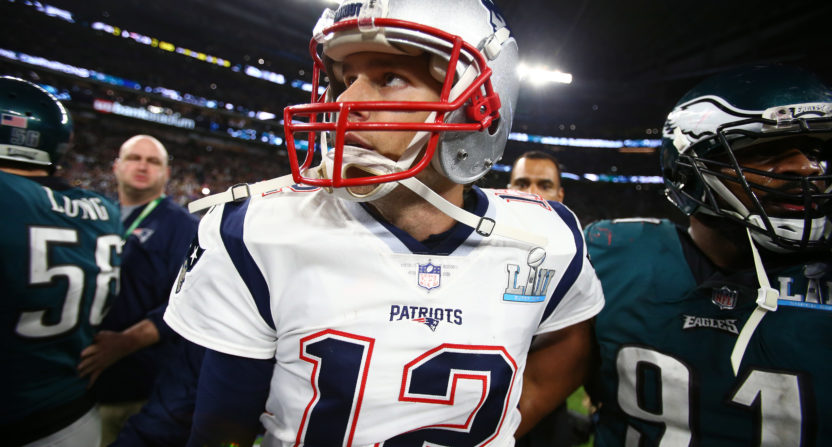 One of the biggest NFL stories of last season was the growing tension in New England between Tom Brady and Bill Belichick, centered at least in part around Brady’s relationship with trainer Alex Guerrero. That culminated in Guerrero reportedly being barred from traveling with the team, and removed from the sidelines.

Over the weekend, there were reports that Guerrero was back traveling with the team to the Patriots preseason game against the Panthers, which obviously raised questions.

Has Tom Brady's business partner/body coach Alex Guerrero been given more access to the Patriots this season? He's on the team plane today on the trip to Carolina.

So when Brady made his weekly radio appearance on WEEI this morning, he was asked about it. It did not go well.

Tom Brady just ended his interview with us after @kirkmin asked him about Alex Guerrero's new travel arrangements with the Patriots this year.

Here’s the audio, via ESPN’s Golic and Wingo; the relevant portion starts at around the 1:04 mark:

That’s not great! Here’s the transcript, via ESPN’s Mike Reiss:

Minihane: We saw the reports this weekend that Alex was on the team plane, which he wasn’t for the second half of last year, I guess, and not on the sideline. Is that accurate?

Brady: Yeah, he was with me this last week, so it was; yeah.

Minihane: What changed with him not being on the team plane last year and this year? Was that just communication back and forth? Was that understanding of other things? What led to that being able to happen this year?

Brady: You know, I don’t want to; I’m not getting into all that.

Minihane: OK, when I ran into him at the Super Bowl last year in Minneapolis, I remember talking about it at the time. When I talked to him there, he had said, in his opinion, all this stuff had been overblown, that he and [Bill] Belichick had a pretty good relationship, even then. Would you say that was true?

Brady: I said I don’t want to get into it.

Brady: Yeah. Everyone knows, it’s well documented how the work he and I do together.

Minihane: No, I understand that. I’m just trying to figure out because I saw the reports this weekend that he was traveling with the team. Was he on the sideline Friday?

Brady: Yeah, all right guys, have a great day. I’ll talk to you later [dial tone].

Brady has hung up on WEEI before, in the aftermath of a fill-in host on another show making disparaging remarks about Brady’s young daughter. In short, it’s clearly not Brady’s favorite weekly activity, although this time it’s hard to blame anyone at WEEI. The line of questioning was respectful and should clearly be within bounds, especially given how big the storyline became last year.

All Brady had to do there was confirm the obvious report and say he wasn’t going to expand on it, and that would likely have been that. The weirder Brady acts when Guerrero’s name comes up just makes the rift more apparent.