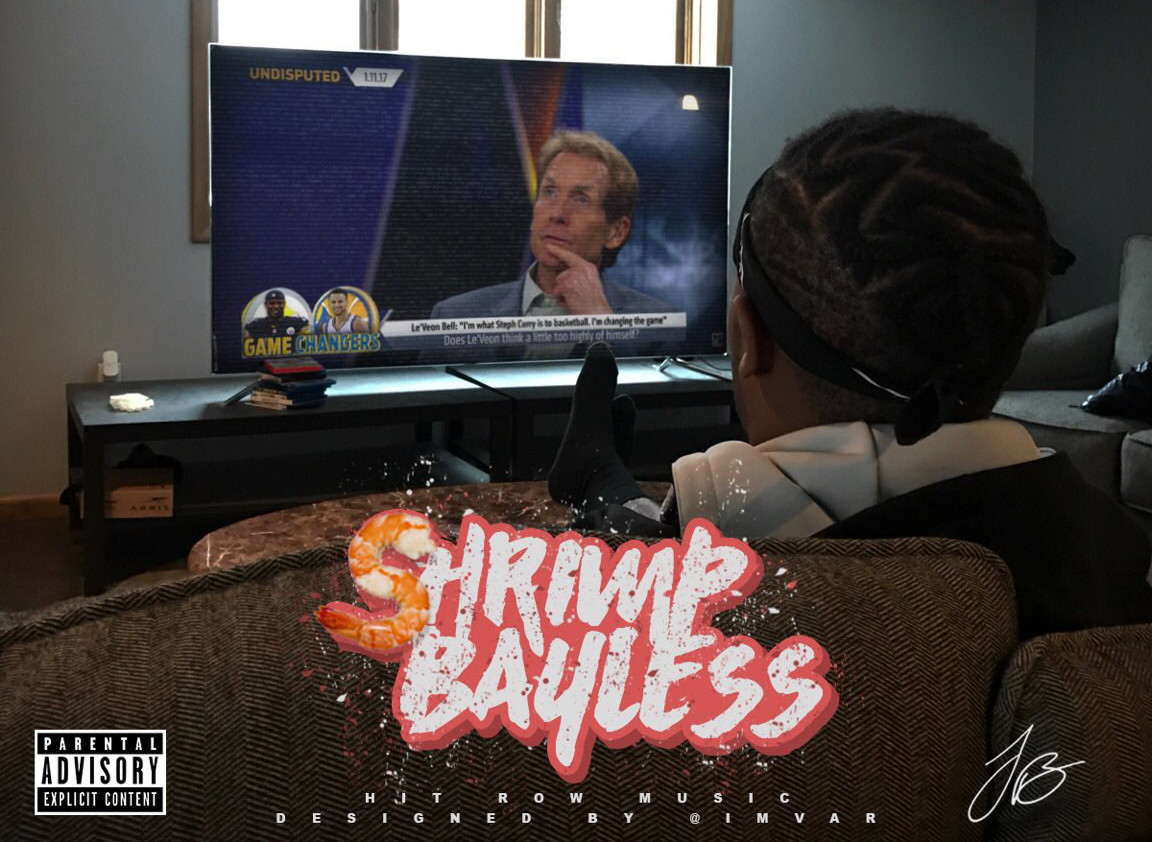 Lil Wayne may have made the theme song for FS1’s Undisputed, but one athlete has now made a song against Undisputed, and against co-host Skip Bayless in particular. That would be Pittsburgh Steelers’ running back Le’Veon Bell, who released a “Shrimp Bayless” diss track Monday evening. Here’s the whole song:

And the cover art:

This starts with some Undisputed clips of co-host Shannon Sharpe and others praising Bell and Bayless criticizing him, and then goes into Bell rapping. Here’s an attempt to transcribe his lyrics (apologies for any inaccuracies):

Probably because my name is mixed in close with some of the greatest/They talk about patience, you close to testing my patience/You say whatever for ratings, I’m not blind, I can see/You say I’m just an average running back, no way you believe it.

Yeah, I’m like Steph, I’m not missing/I told you I’m on a mission/And the shrimp didn’t listen/Understood it was tempting, but I couldn’t get with it/You want to talk for attention, look, here’s your attention.

Yeah, they want to hate on me, but I don’t get it/People mad at me cause I balling, I out here spitting/People know that I got the flow, they don’t know what to do/Not a clue, like the DJs who have one on ones and lose.

Yeah, this is all perfect timing/And I’m known to tote the rock, and I don’t mean Dwayne Johnson/They upset cause of the money on my cards/You don’t think that I’m the best, stay away with all that nonsense.

There’s then a clip of Bayless criticizing Bell’s song titles, and then he starts back in:

Yeah, now back to you hating/I don’t care what you saying, all these beats I be slaying/I think I’m hotter than Satan/I don’t know why you playing/My music only turning up like I don’t want… [can’t make this part out]

All this money is raining/I can’t stop it from raining/These dollars running their mouth, so I’m rapping like Shady/I don’t need meager savings, the money do a 180/There should be no way I’m crazy/Deflate you just like I’m Brady.

Yeah, I guess your visions are blurred/Guess the only way you’d like me’s if I play for the Spurs/I think the Cowboys’ hard-on is about to get on my nerves/Keep on talking that mess, this will only get worse.

Post-interview, was on the way to tape, heard some words/Nobody want to mess with me, I’m worse than the curs/I’m always bringing the heat, and I stay with that heat/They talk about me like I’m Odell on the beach.”

This is far from Bell’s first foray into rap, as he dropped his first mixtape back in March 2016 and told XXL then that it was part of a lifelong interest:

“To be honest, I’ve been rapping since I was 13 years old,” Bell said. “That’s when I recorded my first track. But, now that I got a little fanbase and I got a lot of followers, people are actually listening to me. I just didn’t want to limit myself to being on the field. Making music is something I’ve always wanted to do. I guess I kind of went public with everything.”

Bell clearly has some rapping chops, and he’s had some practice; he also released a seven-track Until The Post Interview EP back in November. There are some pretty good lines in here, too, especially “You love Jerry [presumably Cowboys’ owner Jerry Jones] way too much, you acting like y’all related,” “You say whatever for ratings,” “Guess the only way you’d like me’s if I play for the Spurs” and “Deflate you just like I’m Brady.”Everyone’s aware of Bayless’ love for the Spurs and the Cowboys (both of which he frequently calls “My” on Undisputed), and going after his apparent tendency of targeting ratings (no, Skip, you have not consistently been correct with all these outrageous takes) is a good bit too, as is referencing Seahawks’ CB Richard Sherman’s famed verbal smackdown of Bayless.

It seems appropriate to have oft-criticized athletes giving Bayless a musical smackdown. Now, we’ll just have to wait and see if others join in, or Bayless responds with a diss track of his own…