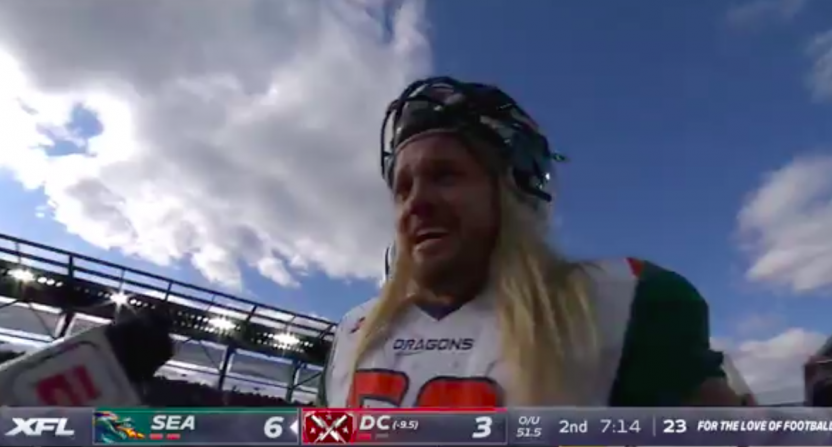 The XFL of 2020 is a lot different than the XFL of 2001. There aren’t any scantily clad cheerleaders. The midfield scramble is long gone. And the focus appears to be on playing good football.

However, that doesn’t mean the new XFL still doesn’t have a little bit of old XFL in it.

The Seattle Dragons visited the DC Defenders for the first game of the new league and it was, for the most part, a fairly well-played first half. Both teams are still working out the kinks but the emphasis on the quality of football play over off-field antics was apparent.

It was also apparent that the players involved really wanted to win the game and were not interested in playing nice. Things boiled over between these two “rivals” midway through the second quarter as it got a bit chippy between the Dragons and Defenders.

One of the quirks an XFL broadcast brings to the table is an emphasis on live sideline interviews after big plays and key moments. That was certainly the case here as Dianna Russini tracked down Dragons center Dillon Day, who was in the middle of the fracas, in order to get his feedback. We not only got some insight into what happened but we were also reminded why live sideline reporting is such a dangerous proposition.

Well, that’s the risk you take. In general, the constant sideline reporting is a novel idea on paper, giving audiences a sense of what it’s like right there on the field. On the flip side, if you go to the well too often, you’re going to find yourself muting F-bombs and other things that don’t really go over well on network television. You can only ask so much of football players in the middle of a game when it comes to thinking about cameras and mics.

We’re guessing whoever is working the dump button for ABC will keep a closer eye on things moving forward.