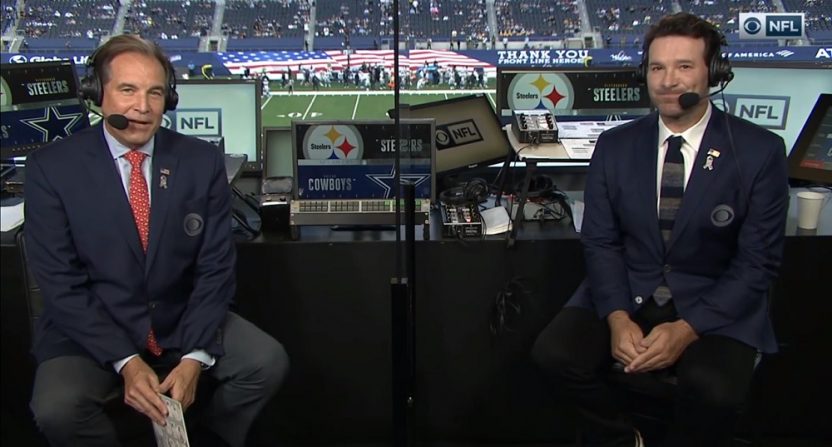 If you’ve watched any amount of NFL action this season, you noticed things were definitely different because of COVID-19.

Studio crews were more distanced. Most games didn’t have any fans. Players and coaches gradually adapted to mask wearing. But there was plenty behind the scenes that was impacted by the coronavirus that fans didn’t see but changed the way broadcasters prepared for and called games.

During the NFL On CBS’ Super Bowl media days on Zoom and through interviews with Awful Announcing, many of the network’s top broadcasters delved into what was missed during the pandemic, what they learned and what they’ll be able to carry over into future seasons when things are hopefully back to normal.

Over the course of a good portion of a 90-minute media Zoom session, Jim Nantz and Tony Romo, who will call Chiefs-Bucs on Sunday, couldn’t stop talking about the dinners and in-person meetings with their technical staff they missed throughout this season. During those dinners, they said, they could discuss things that would come up on that Sunday’s broadcast that may not have been utilized in 2020.

“It’s one of those things that me and Jim know and Jim knows even better than I do having done this for the better part of the 19th, 20th and 21st century,” Romo said, as Nantz chuckled in the background, “how many times in our history those conversations lead to something else that we use on air and they really do.”

Instead of those dinners, Nantz and Romo ended up staying at hotels on the road not being able to see each other until game day with their rooms booked one on top of the other. They ended up speaking over the phone or on Zoom for hours.

“It’s nuances,” Nantz said, “and the guy at home probably doesn’t know what he’s missing, but we know there’s just some subtlety that’s not there.”

“Sometimes there’s a topic that we might go on for an entire drive. So we see that that is missed,” Romo responded. “But as a viewer, they probably don’t think of that because you don’t know what’s missed. It’s hard to decipher that side of it. But me and Jim know the difference.”

Normally when a new broadcast team is brought together, they’d spent days and days together getting acclimated to one another. Charles Davis couldn’t do that when he joined the broadcast team of Ian Eagle and Evan Washburn after coming over from Fox after last season.

But that trio and some technical staff would bond over Zoom to try and replicate a bond so that come September for their first game calling Baltimore-Cleveland that the viewer wouldn’t know that they spent minimal time together in person prior to their broadcast debut as a pair.

“We were all cheap enough and didn’t buy the extra time. We went for the free 40 minutes,” Davis said. “And it became a game about whose face was caught speaking as the Zoom went out. I think I lost more times than not.”

Eagle and Davis hit the ground running, as anyone who ever does anything with Eagle generally does. But it took a lot of screen time to forge that chemistry you saw on the air this season.

“There was a mystery surrounding it because it was so different than either of us had ever experienced from a broadcast standpoint,” Eagle said. “But we just hit the ground running.”

Even more so than the broadcasters in the booth, the sideline reporters had an even tougher time during this COVID season because…they could no longer be on the sidelines.

Tracy Wolfson, who will be on the Kansas City sideline on Sunday, said that it took time to obtain information in different ways from the the lower bowl of seating where they were situated (known as the moat) because she didn’t have that direct on-field access. It took a major mental adjustment for Washburn this season without that access. Things he’d fallen back on as part of his routine throughout his first seven seasons at CBS were no longer there for him in 2020. And with players masked up and crowd noise being constantly pumped in, it became harder to hear what was going on.

“The conversations you would normally have with a coach coming off the field very quickly would now happen maybe through text or a PR director,” Wolfson said.

But teams acknowledged that the field reporter’s job was a lot harder this season, Washburn said, so they’ve been more helpful and accommodating this year. He was able to talk to players even before scheduled production Zoom meetings.

“The teams acknowledged that we’ve got some hurdles in front of us and they’ve done their best to help us get everything,” Washburn said. “Because the overall goal here is when we’re on the air for that three hours is that the viewer t at home wasn’t gonna think ‘man, I’m not getting all that I need when it comes to specific to my job, information on injuries, backstory, clarity, context to what’s happening on the sideline.”

So what have the leading voices of football on CBS learned from this whole experience?

From the technical side, CBS Sports chairman Sean McManus, aside from figuring out that there’s a huge appeal for slime when teams score touchdowns, learned that certain production elements don’t have to be done every time on site.

While NFL broadcasts may not be impacted in the future by remote production, you will start to see other mid-level productions, as he termed it, done from a studio in New York or New Jersey.

This year’s made Washburn definitely appreciate the production side a whole lot more, with audio crews ensuring the sound is right for a remote interview with a coach or player, camera operators making sure a shot is framed so he doesn’t have to turn away from his interview subject or the producer making sure fans can see everything in a postgame split-screen interview.

“I have an even greater appreciation for all those folks do because it’s been a constant puzzle as to how we keep doing what we normally do under the current climate,” Washburn said.

Nantz is proud of the work his crew has done this season to find every avenue it could to round up information and be connected with one another without being in each other’s company.

Wolfson, along with everyone else, is excited to get back to normal next season or whenever it’s safe. But being away from normal times, when she’s normally on the field right in a player or coach’s face after an emotional or exciting win, makes her especially miss those up-close-and-personal moments. And it also makes her appreciate her colleagues who she took seeing all the time at dinners and meetings every week on the road during football season for granted in the past.

“It gives you an appreciation for the camaraderie that we’ve missed out on this year, really breaking down the game when we’re over a drink or some dinner,” Wolfson said. “And we miss that. And I think it makes you appreciate what we have, and knowing that we have a tremendous group that we like to be around. It kind of lets you refocus a little bit and say you know what, here’s another challenge. And let’s go attack it.”