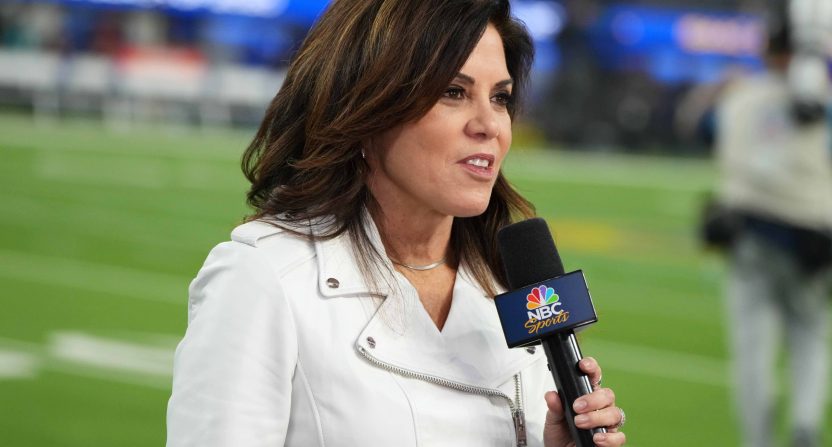 In December, news broke that Michele Tafoya would be stepping away from sideline reporter duties after this season.

Now, ahead of the postseason, NBC and Tafoya have confirmed that news. In a press release, the network announced that Tafoya’s last game in the role will indeed be Super Bowl LVI in February. NBC rolled out the big guns for the release, too, getting comments not only from Tafoya’s longtime colleagues Al Michaels, Cris Collinsworth, and Fred Gaudelli, but from Brett Favre and Peyton Manning as well.

Tafoya’s official comments about her departure, which note that it’s a decision she’s making herself:

“My time with NBC Sports has been the most satisfying of my career.  I’ve had the good fortune of collaborating with a team that is amongst the best at what they do, and the support I’ve received in this position has been unparalleled,” Tafoya said. “The list of people to thank is incredibly long, but for now, I will say I am immeasurably grateful to Fred Gaudelli, Drew Esocoff, Al Michaels, and Cris Collinsworth. They are the backbone of the Sunday Night Football family.

“Some may consider me crazy to walk away from one of the more coveted roles in sports television, and I do not doubt that I will miss many aspects of the job.  But for some time, I have been considering other areas I would like to explore both personally and professionally. I couldn’t ignore that little voice anymore after what we have all endured over the last few years. There’s no better way to walk away from covering the NFL than with one more Super Bowl!”

NBC did not mention a replacement in the release, which makes sense. No point overshadowing Tafoya here now. (Initial reports suggested that Kathryn Tappen was the favorite.) As for why Tafoya would pick now to leave, this is what we wrote last month when the news first surfaced:

(The New York Post’s Andrew) Marchand broke the news this evening, saying the decision was Tafoya’s to make. That’s opposed to being pushed out or (pardon the pun) sidelined following her controversial appearance on The View earlier this year, in which she compared COVID-19 to the flu in an apparent attempt to minimize the seriousness of the pandemic, while also suggesting Colin Kaepernick’s anthem kneeling had nothing to do with his exit from the league.

While what’s next for Tafoya remains up in the air (she’s a multiple Sports Emmy winner with plenty of experience covering more than just the NFL sideline, so this doesn’t necessarily mean she’s finished as a broadcaster), the one thing that is certain is that NBC’s Sunday Night Football will need a new sideline reporter.

Tafoya has been a mainstay on the NFL sideline; this weekend, for example, she’s set to work her 325th NFL game. The NBC broadcast is certainly going to have a different feel next year.