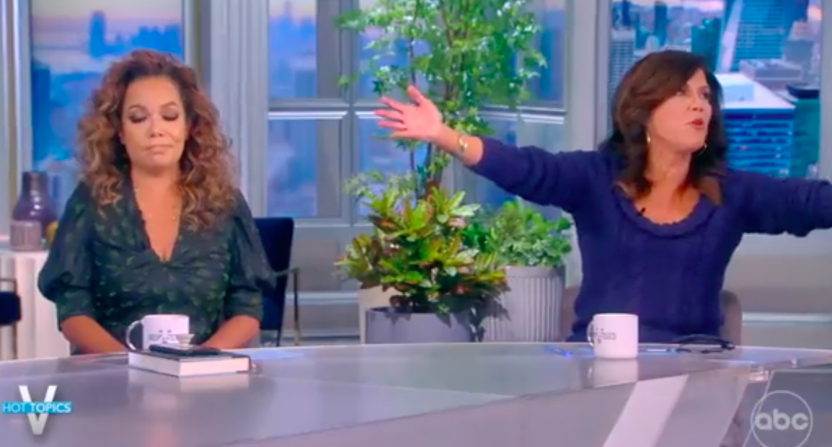 One thing you can’t say is that NBC Sunday Night Football sideline reporter Michele Tafoya didn’t leave her mark on The View following a two-day stint as the resident conservative voice on the panel.

Tafoya, who has described herself as a “pro-choice conservative with libertarian leanings,” was there to take up the mantle long held by Meghan McCain, who left the show a few months back.

On Tuesday, Tafoya got into it with both moderator Whoopi Goldberg and co-host Sunny Hostin over hot-button topics such as critical race theory, vaccine mandates, and American racial progress in America.

“I have a very, very, very close relative who went through Covid, had it, survived, it was difficult,” Tafoya said while defending those who refuse the Covid vaccine. “He is on the other end of it. He’s in his early 60s, big fella. He has more immunity than I do with my two shots. He doesn’t want to get a shot.”

The other hosts tried to explain to Tafoya that that’s not how immunity or vaccination works, but she then went on to equate the Covid pandemic with the flu, which per the CDC, is also not accurate.

CRITICAL RACE THEORY ANIMATING VOTERS IN LOCAL RACES? Poll watchers are saying that some state races could forecast which way the country is headed politically, especially the Virginia race between Terry McAuliffe and Glenn Youngkin–the co-hosts and #MicheleTafoya weigh in. pic.twitter.com/FPr2CEMlEt

The next discussion was critical race theory, which has become a political boogeyman for many conservatives and led to an exchange between Tafoya and Goldberg wherein the reporter said that white people have been stepping up and helping people of color “since the Civil War.” Whoopi replied, “No, no, no, no, they haven’t” and pointed out how long it took for some states to make lynching black people illegal.

Wednesday’s Hot Topics didn’t get any less divisive as Tafoya returned to discuss, amongst other things, Colin Kapernick’s new Netflix series Colin in Black & White. Specifically, a scene in which the NFL player-turned-activist equates the NFL Draft to a slave auction.

Hostin, who recently interviewed him for Ebony, said it was “not sort of totally unreasonable” to make the comparison, noting that most NFL players are black and most team owners are white men. Tafoya pushed back, saying that “no one forces these guys to play” and “comparing it to the slave trade was a little rough.”

Tafoya also refuted the idea that Kaepernick has been blackballed from the NFL over his racial justice protests, saying “If they believed he could win them a Super Bowl, he would be on a team right now. I promise you that.”

“I think you need to be really careful about that accusation,” said Tafoya. To which Hostin noted, “there was a settlement (to a lawsuit about NFL owner collusion).”

“A lot of teams have tried him out, I will tell you, I know my stuff on this, too,” Tafoya responded. “He didn’t lose everything, in fact, I’d say he gained a whole lot, a leader of the movement, a Netflix series, he’s got Nike endorsements.”

The most animated moment of Tafoya’s stint came a little later on when she and Hostin sparred over Kaepernick’s decision to move an open NFL tryout in 2019 due to a lack of media access and a required liability waiver.

“I just want to give the benefit of the doubt to some people that there are two sides to this story,” said Tafoya, implying that Kaepernick’s version of events might not be entirely truthful. “I think all of us can agree there’s probably a lot to this story we still don’t know.” At that point, there were audible moans from the audience.

“Oh, you’re all gonna groan at me,” said Tafoya, waving her arms in the air. “Bring it on! Bring it on!”

Michele Tafoya gleefully eggs The View crowd to "bring it on" after they groan at her Colin Kaepernick take. pic.twitter.com/46rbGgS0qJ

“I don’t know. Maybe they feel that they saw what the big picture was and I think people didn’t like it,” said Goldberg, attempting to extrapolate what the audience’s reaction was about.

Safe to say that many of The View‘s regular viewers seem pleased to see Tafoya’s short stint end, though her comments and their reactions are all part of the very reason she was invited on in the first place. Missions accomplished.