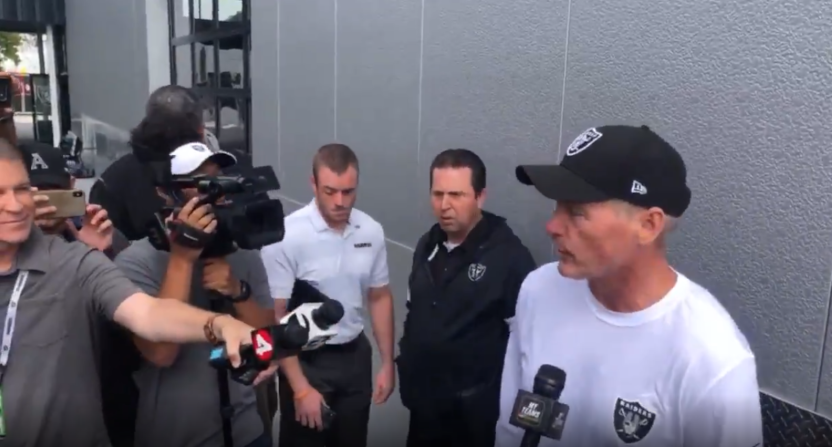 There’s a fascinating character at the center of an Oakland Raiders’ media controversy—and it’s not Antonio Brown. Brown is obviously notable in his own right, and has been involved in all sorts of sagas this offseason (from frostbite to helmets), but an underexplored figure in his latest controversy is the guy on the other side—Raiders’ GM Mike Mayock. Mayock fined Brown $40,000 for missing an Aug. 18 practice in Napa and $13,950 for missing an Aug. 22 preseason walkthrough in Winnipeg, and Brown took to Instagram Stories Wednesday morning to post that fine letter and complain about it.

That incident reportedly led to a Brown-Mayock confrontation at practice Wednesday, with Brown threatening to punch Mayock in the face, and the Raiders are now reportedly considering suspending Brown, which could wipe out almost $30 million in guaranteed money for him. Brown unfollowed the Raiders on Instagram Thursday, and Mayock delivered a very brief media statement Thursday as well:

Here’s a transcription of that from Levi Damien of Silver and Black Pride (the SB Nation Raiders’ blog), and even more interestingly for our purposes here, a comment on that from USA Today’s Doug Farrar:

The guy who used to do three-hour conference calls pre-draft and half-day podium sessions at the Combine has been officially been GM'd. https://t.co/6QFiWto1be

It really is fascinating how much Mayock has changed, at least in his approach to the media, in his transition from NFL Network analyst to Raiders’ GM. As Farrar notes, Mayock was famed as an analyst for his willingness to talk to media, but he’s been very much the opposite since taking this GM job in December. And after the start of filming for year’s Hard Knocks, it was Mayock complaining about the “intrusion” (albeit with caveats that director Tim Rumpff and the NFL Films crew were doing a good job at staying out of the way):

Mike Mayock comment on "Hard Knocks," which is following Raiders with 32-person NFL Films crew to create five-episode HBO show. It's an "intrusion. But it was handed to us, so it’s up to us to deal with it. …And so far, it's been great." pic.twitter.com/PVhylno53P

And while he was one of the most potentially intriguing characters for Hard Knocks, Mayock was a very limited figure throughout the show, presumably by his own choice (which makes sense given his comments about the “intrusion”). He made occasional appearances in group settings, including discussing Parliament-Funkadelic and roasting the players who sang “Happy Birthday” to him, but wasn’t seen much overall. And he reportedly was behind decisions not to allow the Hard Knocks crew in most cutdown meetings or to air footage the Raiders weren’t “comfortable” with (which is funny, as that hasn’t really posed much of a problem for the other teams featured on the show), furthering the sense of his shift from a media figure to a background one. Mayock has also been known for terse press conference statements with no opportunities for questions, such as the one he delivered Thursday and the one he delivered at that Aug. 18 practice Brown skipped. So “reticent public figure” has been a role he’s playing for a while.

An interesting question about Mayock’s actions as Raiders’ GM is how much of it’s actually him and how much of it is him playing a role, though. In most North American pro sports, the GM is above the coach or manager and is the top figure on the on-field side (excepting cases of a “president of sport operations,” who’s really a GM in all but title), but the NFL’s different there. Some NFL GMs have that authority and hire and fire coaches, but others are clearly below the head coach, and that’s the case with the Raiders, where head coach Jon Gruden was signed to a 10-year, $100 million deal in late 2017, was given roster control, ran his own personnel staff alongside that of incumbent GM Reggie McKenzie, and eventually forced McKenzie out last December and hired Mayock.

Gruden’s authority is perhaps particularly notable when it comes to the Brown situation, and Hard Knocks was illuminating there. The show captured a whole lot of Gruden being friendly with Brown, encouraging him in person and refusing to complain about him to media, and then Mayock taking the “bad cop” line by actually issuing statements about Brown’s absences. But with Gruden being the top man on the Oakland football operations totem pole, it’s worth wondering if this pushback against Brown actually comes from him but he’s having Mayock voice it. NFL Network’s Michael Silver (who’s long been very plugged in to the Raiders) mentioned that “good cop/bad cop” scenario in an update Thursday:

While there’s a lot to wonder about with regards to if this relationship is actually salvageable, though, it being Mayock rather than Gruden at the center of it perhaps offers a little hope. The coach has to interact with players a lot more day to day than the general manager does, which can lead to that “good cop” approach, and that was also shown through Hard Knocks; yes, Gruden occasionally offered criticisms of players like Keelan Doss and Nathan Peterman, but those were mixed with big helpings of praise.

And while Brown has expressed plenty of complaints towards Mayock, including this week’s drama, it’s notable that he’s complaining about Mayock and not Gruden. Again, Gruden had nothing but good things to say about him, at least when the cameras were rolling. So that maybe further speaks to Mayock being asked to play the “bad cop” role. And maybe this gets worked out in a way where Brown comes back and plays and gets along with Gruden while nursing a grudge against Mayock, even if Gruden was likely behind (or at least in approval of) what Mayock has done.

But the overarching point of interest here is perhaps how Mayock went from a loquacious NFL Network analyst to a GM who was seemingly trying to stay in the background as much as possible, and one who wound up in the spotlight anyways. And that raises some questions about which version of Mayock is the real one, or at least closer to it, or if his personality just changes based on what he thinks is right for each situation he finds himself in. With NFL Network, that was a prominent personality, one who talked a lot and got a lot of press as a result. With the Raiders, that appears to be more as a background figure who doesn’t talk much, and as a potentially-convenient figure to deflect some heat from Gruden.

Maybe the background role is really what Mayock’s always wanted, or maybe it’s something he’s doing because of the Raiders’ setup; regardless of which version’s more true to his personality, the change is certainly notable. But with Brown at least, he hasn’t been able to stay in the background.