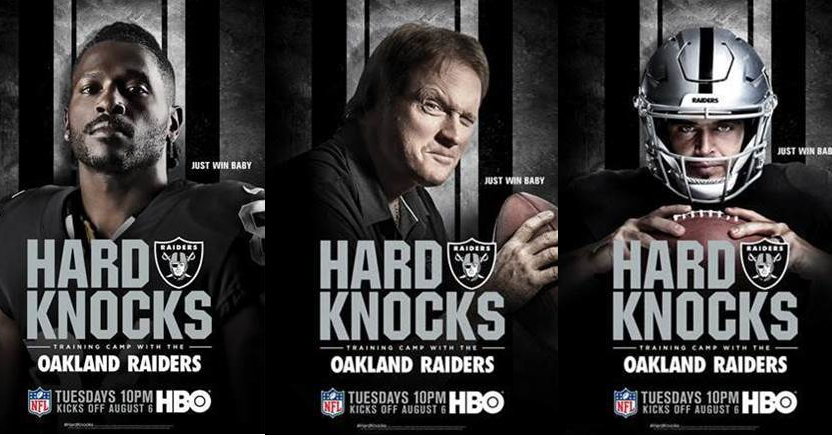 This year’s HBO/NFL Films Hard Knocks series on the Oakland Raiders has seen a lot of interest and ratings, heading into Tuesday night’s finale, which premieres at 10 p.m. Eastern. Ahead of that finale, director Tim Rumpff spoke to Awful Announcing about the show, how this year’s version has stood out, and particular challenges they’ve dealt with, from covering the quickly–changing Antonio Brown storylines to the logistical hurdles of covering training camp in Napa, shifting to the Raiders’ headquarters in Oakland, and heading to Canada for a preseason game.

Rumpff has been with NFL Films for 12 years and has been working on Hard Knocks almost since he joined the company; this is his fourth year in the field for it, and his second as the director of the show. He told AA he thinks Hard Knocks is special for a variety of reasons, but particularly for the connections it lets viewers feel to players.

“I think the very first one is just the human interest stories that we’re able to tell through this show. It’s very unique in that aspect where you really get to know guys. And being embedded with the team, you can meet not only them but also their families, their parents, their spouses, their kids, and really get to know them on a personal level. I think that’s why this show works so well, it’s why a lot of people love it, because you do get to know these guys and you feel for them. You feel like you’re right there with them as they try to make the team, whether it goes well and they’re celebrating, or if it doesn’t go well and you feel the heartbreak with them.”

Rumpff said this season’s installment has stood out thanks to the Raiders’ history and thanks to their personalities.

“This year is really unique just because of the team. I think it’s been a while since we’ve had a team that has the history of the Raiders with their success winning Super Bowls. And then even a head coach like Jon Gruden who himself has won a Super Bowl, and the stature that he has in the NFL. And then the star power as well, between Antonio Brown and Derek Carr coming into his own. And the amount of rookies that are on this team. I think that’s why this team was a perfect fit for the series this season.”

Hard Knocks this year has been covering one of the biggest national NFL preseason stories, that of receiver Antonio Brown. Brown, the Raiders’ much-hyped offseason trade acquisition, has been in the headlines for a whole lot of reasons, from frostbite on his feet to his battles with the league over what helmet he can wear. And Hard Knocks has shown a lot on Brown, from his arrival in camp via hot air balloon to his training sessions and conversations with his personal trainer to close-ups of his feet, discussions of his helmet complaints, and thoughts from Gruden and others on the various Brown sagas. Rumpff said covering those storylines has worked out well thanks to Brown’s openness, and thanks to his team’s ability to quickly turn around late-breaking developments.

“I think we’ve been pretty fortunate with it that Antonio has been so open with us and willing to share his story with us. That’s been great that he’s kind of taken us along for the ride as everything has gone on. And another thing that’s kind of unique with this show compared to others; as things are developing, we’re able to cover them. Something that happens on a Sunday night or Monday morning or even before show three where he showed up Tuesday morning, it was able to make the show that night. So I think that’s really where we’re at our best, not only telling these stories but also really kind of showing it in real time as well.”

Rumpff said it’s not easy to insert something that happened earlier in the day into a documentary episode airing that night, but it’s possible because of the resources of NFL Films (there are 120 people at NFL Films assigned to this overall, including 32 in the field) and the planning of the team.

“It’s wild. It’s a lot of manpower that goes into it. We’ve got 32 people out in the field as part of my crew, so obviously we’re following all the storylines out here, and we’re in communication with Ken Rodgers back at NFL Films and his crew, which is about the same size. And you know, when we know something like that is going to happen, it’s a matter of getting the shots, sending them back digitally, immediately over to film, and making sure creatively they can fit spots to put them in the show.”

That helps illustrate just how big an operation Hard Knocks is. It has crew working 43 straight days on the series (from July 22 to Sept. 2), with 20 rolling cameras (six manned and 14 stationary) shooting training camp and 1,750 hours of footage shot (350 per episode). And that kind of presence isn’t always welcomed by teams; plenty of teams don’t like the idea of Hard Knocks cameras, which is why the NFL’s had to go to forcing certain teams to possibly appear (five were eligible this season). And the Raiders’ management made it clear this year that they weren’t thrilled about the idea, with GM Mike Mayock (a former NFL Network employee, even) calling it “an intrusion” before the show began. But Rumpff said plenty of teams have expressed those kinds of concerns before, and he thinks his team has done a good job of not getting in the way.

“I think that’s not exactly uncommon. I think every single year the teams are worried about what kind of footprint we’re going to have in the field. I think the first couple days is always an adjustment period, it’s 32 people. But these are 32 people that have worked on it, some of them since the very first season with the Baltimore Ravens, so they kind of know where to be to blend in. Our goal is to be a fly on the wall and I think after a couple days for a lot of players and coaches, we do start to blend in. After that feeling-out period for the first couple days, I think we’ve kind of blended in.”

While there may not have been many issues with their dealings with the team, Hard Knocks has covered some wild issues the Raiders have faced. One particularly notable one came from last week’s episode’s coverage of their preseason trip to Winnipeg, Manitoba, where they wound up playing on an 80-yard field thanks to concerns from the Green Bay Packers about the holes in the Investors Group Field turf from moving the CFL goalposts. That was a storyline the Hard Knocks staff had no idea was coming, but they managed to do a remarkable job of covering it, capturing everything from Packers’ personnel inspecting the field pre-game to Gruden complaining about the change to the officials in the tunnel to Gruden’s post-game veiled shots at the Packers. And Rumpff said rolling with what happens is a big part of the Hard Knocks gameplan.

“That’s the crazy thing with this show; everyone asks us ‘Hey, what’s the next show going to look like?’ We honestly have no idea until that week, or even days before it actually airs. Because  when something like that comes up, you can’t script something like that and no one saw it coming, so our job is just to be there, document it, and then put it on screen on Tuesday.”

The Raiders heading to Canada also created some logistical challenges for Hard Knocks, and Rumpff said even the camp in Napa created challenges too, but their behind-the-scenes people were able to make it work.

“We had plenty of hurdles this offseason. This is actually the first time we’ve had a team go away for camp since the Jets did it, they went off to Cortland before breaking camp and going to their facility. That was the first hurdle; we had to move our entire operation from Napa to Oakland, and then two days later, we had to move it all the way to Canada. So it’s a lot of logistics, but we have some great people that work on our crew behind the scenes that handled all that logistics for us, making sure that we’re able to get all of our gear up there and our people and all that. It was definitely an obstacle, but that’s what we’re built for.”

One of the repeated moments in this year’s Hard Knocks episodes is Gruden saying in meetings “Knock on wood if you’re with me,” and all of the Raiders dutifully rapping on their desks. In last week’s episode, that turned into an incredible montage, and Rumpff credited NFL Films composer David Robidoux for that.

“We have a great composer back at NFL Films named David Robidoux who does a lot of our films. When you see something like that, you kind of hop on that opportunity to try to make something creative that’ll stand out. Day one at camp, that’s just something that we saw that they were doing quite often, and David and some of the people that we have running the music, they hopped on that.”

Tuesday night’s finale will wrap up this year’s edition of Hard Knocks, and Rumpff said the key focus there is providing a conclusion to the various stories they’ve tracked. Here’s a preview clip, featuring Gruden talking about Le’Veon Bell and Danny Woodhead:

Rumpff said the last episode of each Hard Knocks season has always been a favorite for him, as it lets viewers celebrate with players they’ve gotten to know who do actually make the 53-man roster.

“I think it’s really just wrapping up all the storylines we’ve followed, the guys on the bubble and the guys that are getting ready for Week One. It’s always one of my favorite stories because you get to see the happy endings of the guys that make that 53.”