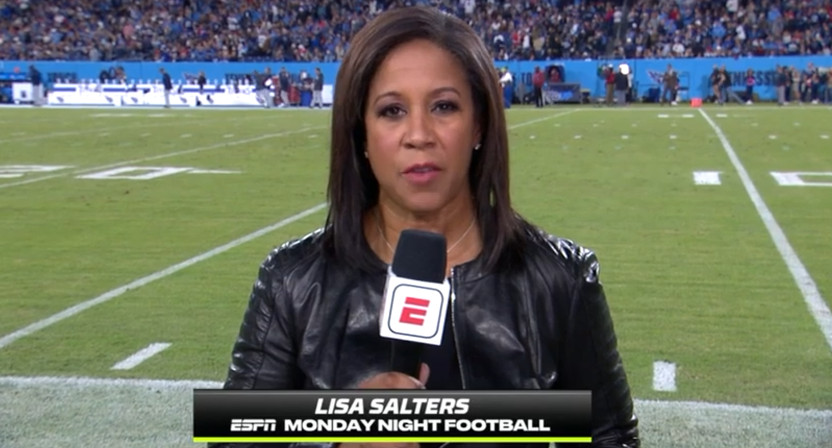 ESPN’s primary Monday Night Football booth will be completely new this year, with Joe Buck and Troy Aikman sliding in there, but they’ll have a familiar face on the sidelines for those broadcasts. That would be Lisa Salters, who’s been the main MNF sideline reporter since 2012. Thursday saw the network announce a multi-year extension for Salters (seen above during a 2020 game), who’s been at ESPN since 2000, with that announcement noting that Salters will both continue on MNF and as ESPN/ABC’s lead NBA sideline reporter, including for the NBA Finals.

On Monday Night Football, Salters is the longest-tenured sideline reporter in that program’s since-1970 history on ABC and ESPN. MNF only started using sideline reporters in 1994 with Lynn Swann, with Swann, Lesley Visser, and Melissa Stark all holding the role for three seasons and Michele Tafoya holding it for seven seasons. After Tafoya left for NBC following the 2010 season, ESPN used a rotating cast of sideline reporters in 2011, including Suzy Kolber, Rachel Nichols, Wendi Nix, Sal Paolantonio, John Sutcliffe, and Ed Werder. They then tabbed Salters to take on the role full-time beginning in 2012, and she’s held that role since, remarkable considering how much turnover there has been at ESPN in general and on MNF in particular in that timeframe. Here’s a video ESPN PR released last year on Salters’ thoughts on initially getting that MNF assignment:

And here’s a follow-up where she talked about how she approaches sideline reporting:

Salters started her career as a broadcast news journalist, working for ABC News from 1995-2000 and serving as the first West Coast correspondent for ABC-affiliated NewsOne. Some of her notable stories there included coverage of the O.J. Simpson civil and criminal trials, the Oklahoma City bombing trials, the 1996 crash of TWA Flight 800, and the 1998 Winter Olympics in Nagano, Japan. She joined ESPN in 2000 as a general assignment reporter, with some of her early work including covering sports-related stories in and around U.S. Central Command in Qatar for Outside the Lines, SportsCenter and ESPNEWS during the Second Iraq War, covering the U.S. men’s national team during the 2002 FIFA World Cup, covering the 2004 Athens Olympics, and hosting ESPN’s coverage of the 2006 Torino Olympics.

Salters was part of the launch of E:60 in 2007, and served as a featured correspondent there until a promotion to co-host in 2019. The “Life As Matt” E:60 segment she helmed in 2017 on transgender high school track and field athlete Matt Dawkins won a Sports Emmy in 2017. She was the sideline reporter for ESPN’s featured Saturday Night Football college game from 2006-10, and she’s also been a key NBA on ESPN/ABC reporter since 2005. She even worked a NBA and MNF game in different cities on Christmas Day in 2017. We’ll see what she does at ESPN in the years ahead, but she’s certainly had an impressive run with that network to this point.