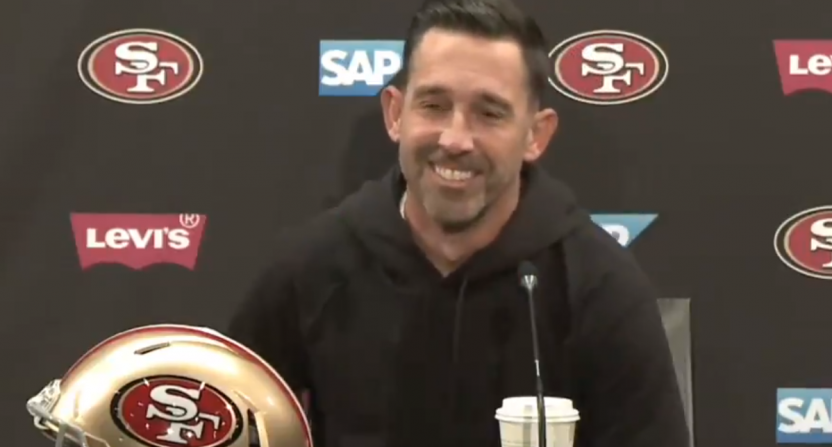 Any quotes this week should be taken with big grains of salt this week, whether they’re anonymously leaked or on the record at press conferences. It’s pretty tough to get any kind of straight answer from anyone, and that’s especially true for teams at the top of the draft who may or may not be planning on dumping their current starting quarterback.

One such team this year: the San Francisco 49ers, who traded three first-round picks to move up to the #3 overall selection on Thursday night. Whoever they end up taking (a decision the 49ers very much want everyone to believe is up in the air), it doesn’t feel like incumbent starter Jimmy Garoppolo is long for the Bay Area, whether he sticks around for a season or not.

One reporter tried to get 49ers coach Kyle Shanahan to commit to Garoppolo’s status, asking straight up if he’d be on the roster after the draft was completed. Shanahan was always going to dodge the question, but his reasoning was less “coaching platitudes” and more “existential crisis”:

Q: "Will Jimmy be on the roster on Sunday?"

Kyle Shanahan: "I can't guarantee anybody will be alive on Sunday……."pic.twitter.com/FlLvf5nEwc

Imagine, for one second, being Jimmy Garoppolo and hearing that response to that question. It’s a hell of a pivot from the chuckling smile about having forgotten the reporter’s first question! Based on Shanahan’s logic, we can’t even know that a Draft will take place.

Honestly, it’s the kind of tactic that could really find a home among NFL coaches, who have long been searching for ways to avoid offering any sort of transparency, even when doing so would in no way impact transactions or play on the field. Of course the logical endpoint was a coach answering a basic question with some form of “We could all be killed by a meteor tonight, so I can’t say either way.”

The only surprise is that Bill Belichick didn’t think of it first.