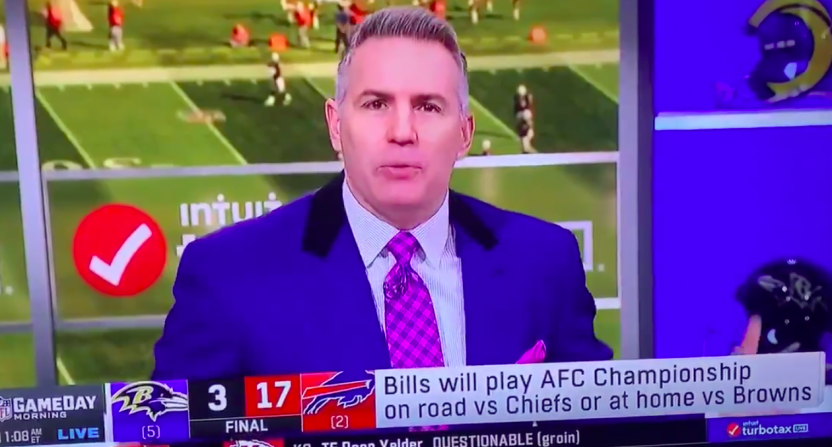 The St. Louis Rams of the late 90s and early 00s were The Greatest Show on Turf. They amassed massive chunks of yardage thanks to an air attack helped greatly by their ability to play all their home games inside a dome. Coupled with the various other domed stadiums around the league, it wasn’t all that often the team had to play outdoors, and perhaps that was a factor in helping them go to two Super Bowls and win one.

At the helm of that offense was Kurt Warner, who went on to also take the Arizona Cardinals (playing in a stadium with a retractable roof) to the Super Bowl. So he knows a thing or two about how to succeed in the NFL Playoffs. And it turns out that the key to victory for Kurt wasn’t his arm or great receivers or a sturdy offensive line. It was…nice weather?

The Buffalo Bills defeated the Baltimore Ravens 17-3 on Saturday to advance to the AFC Championship in a game marked by windy conditions common to Western New York this time of year. Warner, appearing in-studio on the NFL Network, had a stormy take of his own ready to go, saying that he wished the game could have been played indoors and that he’d prefer it if NFL playoffs games never had to deal with the weather at all.

All due respect, @kurt13warner, but this is a terrible take on @NFLGameDay. The elements last night WERE the same for both teams and the better team DID advance.

“Can we just play every playoff game inside?” Warner said as everyone else on the panel groaned. “Here’s what I don’t like. I don’t like it when we come to the biggest moments of the season, the biggest moments of our career, and now the elements become a part of the mix. I want the best team to be able to advance and all the elements to be the exact same for every team.”

Okay, so, on paper, it’s understandable what Warner is trying to say here. That the playing field should be as level as possible and that the talent on the field should determine the outcome.

However…when is that EVER the case? Every NFL game involves outside stimuli and conditions that affect the outcome. There are a million factors that can influence the outcome of a game in tiny or large ways and the weather is just one of them. You could even make the case that a team that plays in hot weather has an advantage over a team that plays in cold weather if it’s 80 degrees out, but no one would complain about those conditions. To say nothing of stadiums like Lumen Field (formerly CenturyLink Field) where fan noise can impact play calls. Would Warner like to eliminate crowd noise to level the playing field while he’s at it?

Weather conditions and their impact on the game also have a long and storied history in the NFL. The Ice Bowl. The frozen tundra of Lambeau Field. The Tuck Rule game. Some of the craziest weather conditions have also created some of the most memorable playoff moments in league history. Whether you think it’s fair or not, that’s part of playing outdoors in January. And if your team isn’t prepared to win under those conditions then you probably didn’t deserve to, wherever you’re from.

As you can imagine, Warner’s take, which includes an implication that the better team lost, did not go over very well, especially with Buffalo fans.

Oh Kurt, let’s see played in St. Louis (Dome), played in Arizona (Dome) and played at the top of his game. Played in NY for Giants (No Dome) Not so good for Kurt. Less I forget, Arena League (Covered) Good for Kurt! Somebody is soft? Just fact, no disrespect! @kurt13warner https://t.co/UeEmBfpHr0

Love how Kurt Warner saying playoff games should be played in a dome so the best team can go on ???? Get real man the best team did go on

Kurt, except you said the better team didn't advance and its because the weather. How does the cold and wind not favor a better running team? Both teams played and tried to win in the exact same conditions. One did, the better team yesterday won. #BillsMafia

It appears that @kurt13warner has also made the list #BillsMafia pic.twitter.com/4m5p4nUmzU

Warner certainly heard about it on social media so he took to Twitter to defend his comments, though he remained fairly defensive the whole time.

Love u all, even the hate, but I know how I feel… & reason very few SBs are been played in cold weather cities… biggest games are about teams/players not about weather & any adv 1 team may have bc that is where they live & play… I love the elements, just rather not in PO/SB

Can’t we just talk here, haha… so funny, you make someone mad and they just attack everything about you… Sad, but the world we live in! Love u all – love to have conversations – just bring a take & not just hate & I’m here for it!

Exactly what I was saying… personal preference… not about Bills win or any other game… just what my preference would be knowing how elements CAN effect things out of our control!! https://t.co/vbY6sqq68P