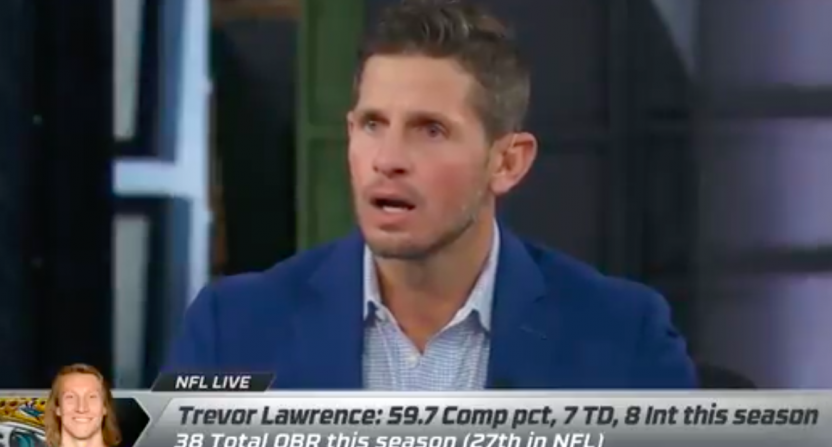 While the Jacksonville Jaguars are 1-5 and likely mired in yet another losing season, it’s hard to make the case that any of that is Trevor Lawrence’s fault.

Lawrence, the No. 1 pick in the 2021 NFL Draft, joined a franchise that was coming off a dreadful 1-15 season and headed for something similar this year. Urban Meyer’s reign as head coach has been more about off-season drama, unrealistic ideas, and reports of player unhappiness than anything. Yes, Lawrence has struggled on the field but he’s a rookie quarterback playing for a bad football team…of course, he’s going to struggle.

And actually, as much as we’ve heard a lot about Lawrence’s interceptions, he’s improved quite a bit the last few weeks. His completion percentages are up, his interceptions are way down, and he’s had a QB rating in the 90s for three straight games.

All of which is to say that there’s no reason to worry about Lawrence just yet. And there’s certainly no reason to think that, because the Jaguars are 1-5, that means Trevor isn’t good. That’s an absurd take.

"I want quarterbacks that's going to help my team win, not hype."@keyshawn is not 100% sold on Trevor Lawrence just yet ? pic.twitter.com/jrgMk3IdxN

“I don’t mind where Trevor Lawrence is right now as a rookie,” Johnson said. “He is certainly growing and getting better each week. But this whole putting him in “once-and-a-lifetime generational quarterback”… Give me some damn wins. That’s all I care about. Because those types of guys, they win football games.

“I want quarterbacks that’s going to help my team win, not hype.”

Johnson barely got through his hot take before co-host Dan Orlovsky lost his mind. Not only did Orlovsky point out that both Troy Aikman and Peyton Manning were on teams that went 1-15 their rookie seasons. Johnson tried to counter by saying that Peyton Manning didn’t receive the kind of hype that Lawrence is receiving, which, again, is insane.

Orlovsky reiterated that wins are not what’s important for Lawrence at this stage in his career and that a rookie quarterback’s development is vastly more important than whether or not he wins games, especially when it’s someone you’re hoping will become a franchise face.

You’re not supposed to do this in your 6th start

Orlovsky also pointed out that Mac Jones and Justin Fields, two rookies who Keyshawn says are helping their teams more than Lawrence, are currently quarterbacking teams that are 2-4 and 3-3, respectively.

Trevor Lawrence the last 3 weeks is a top 1/3 QB in all of football. Already. As a rookie. On an awful team….

And Johnson’s co-host wasn’t the only person who had concerns with his absurd opinion. Other NFL folks were absolutely tripping all over themselves to call it out as nonsense.

6 games into Keyshawn’s rookie year, his #Jets were 0-6 and his per-game stats were: 3.8 catches, 60.3 yards and .5 touchdowns. 5 months after that rookie year, Key produced a memoir (Just Give Me The Damn Ball) about playing for his 1-15 Jets. Pearl-clutching about hype in 2021. https://t.co/FixK4iSvtT

This is one of the worst takes I’ve seen from Key ? Trevor has grown the most of any rookie QB from week 1-6. If he holds this pace, we’re talking about a record year and ROY honors https://t.co/L7hql0L74l

Did I hear correctly that @keyshawn gave Mac a pass because the Patriots “aren’t at talented as we think” but then got on Trevor for not winning enough?

Have you seen the Jags roster??? https://t.co/W1coqIudMj

It’s fair to say that Lawrence has a long way to go before he justifies his selection as the No. 1 pick in the draft, but then again that was true over every quarterback in that position before him. And he’s already proven enough to warrant the chance the Jaguars took on him. For all we know, some of these rookie quarterbacks will pan out and some of them won’t. Anyone who says they know what’s going to happen is full of it.

What we do know is that Trevor Lawrence is progressing and the Jaguars probably won’t win many games and the latter does not mean the former isn’t working.