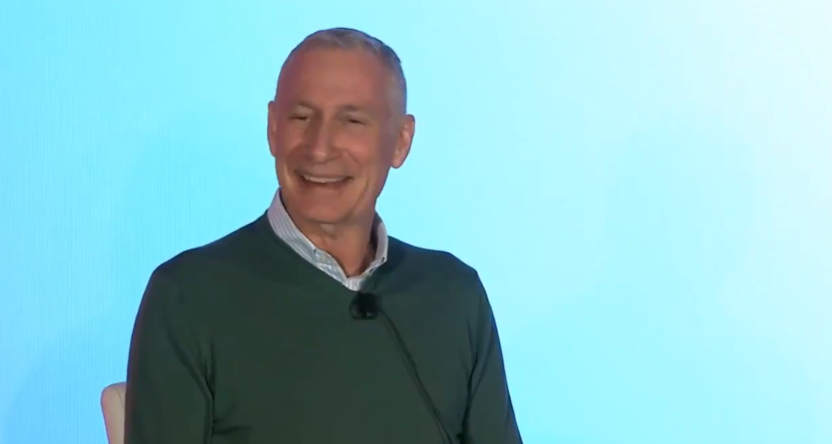 Former ESPN President John Skipper has been executive chairman of streaming platform DAZN for over a year now, but while that platform’s made a major impact in other countries, its biggest current U.S. deals are in boxing. There, they’ve made some noise, inking deals with Canelo Alvarez, Matchroom and Anthony Joshua, and GGG, and they aired the big Ruiz upset of Joshua.

However, when it comes to the major American sports leagues, DAZN may be off the radar of a lot of fans because of the limited amount of U.S. rights they have at this point. DAZN has attempted to make a big splash with their ChangeUp MLB whiparound show, but back in April Skipper admitted it was put together with an eye towards the future, saying it was a sign to the major professional sports in America that DAZN could be a player in the next round of rights deals.

In an interview with MultiChannel (after they selected him as their executive of the year), Skipper opened up on that subject even more. Much of the interview focuses on DAZN’s global portfolio of rights fees in various countries around the world. In defining the DAZN brand, Skipper even said it is a “pure-play global streaming platform.” But when it comes to growing DAZN in the states, Skipper was very honest about how the platform is looking to build partnerships with the major leagues. Specifically, Skipper mentioned the discussions DAZN has had with the NFL about Sunday Ticket. (This is the second recent DAZN reference to the NFL, as DAZN CEO Simon Denyer told Bloomberg in July that they were “definitely interested in looking at the NFL rights.”) Here’s what Skipper told Multichannel’s R. Thomas Umstead:

We did the baseball deal as a clear public declaration that we’re not looking to have a singular sport proposition, but instead looking to be a multisport proposition. We’re looking to be in business with the major leagues in the U.S. I have a long relationship with [MLB commissioner] Rob Manfred and [MLB chief operating officer] Tony Petitti. I went to see them and said, “What can we do?” Because we wanted to have something that says, “We’re in business, and not just for boxing.”

To your question, the answer is we’re a multi-sport proposition and we’ve got a long horizon. We expect to be in the discussion for all major rights that come up. We’ve been public that we have had discussions with the NFL about NFL Sunday Ticket. They are assessing their options on what to do with Sunday Ticket and we’ve had conversations with them. We know that NFL content is a game-changer for people and it helps to build emerging platforms. It helped to build ESPN, Fox Broadcasting and DirecTV. We’d love for it to help build DAZN.

While there was discussion Sunday Ticket could be available sooner thanks to opt-out clauses for both DirecTV and the NFL, recent reporting suggests those opt-outs are likely not going to be exercised and the package now likely won’t come on the market until at least 2021. But it’s still interesting to hear that Skipper mention actual discussions about Sunday Ticket; that’s been predicted since April, but it’s notable that he’s outright saying it now, and that it still seems like a play for DAZN even a few years down the road.

And overall, Skipper is refreshingly open about DAZN’s current situation, especially when it comes to their pursuit to become a major player in the American sports media. And for the last generation, that pursuit has been about one thing and one thing only – the NFL. It was true for ESPN in the 1980’s and true for Fox and DirecTV in the 1990’s and beyond.

Sunday Ticket would likely be the game-changer for DAZN in a way that would go far beyond boxing or MLB highlights. Skipper acknowledges that publicly and every other sports media executive probably would do likewise. With the NFL floating out the idea of a potential non-exclusive Sunday Ticket package opening up down the road, Skipper also sent an olive branch out to perspective traditional media companies that could partner with DAZN for Sunday Ticket or other properties.

Let me be clear: Sports rights in the U.S. will remain quite expensive. I think we will be smart and look for [content properties] like Sunday Ticket [the out-of-market package currently exclusive to DirecTV], where there are maybe over-the-top rights available, and we’ll look for alternative packages. We may talk to some of the big broadcast and cable networks about partnering on buying some rights. I don’t want to come off as though I don’t understand the rights landscape when the NFL is selling billion-dollar-plus Sunday-afternoon packages and Monday-evening packages. I’m not sure that that’s going to be the best bang for our buck right away.

I think that the rights around the rest of the world are being rationalized in a way that the rights in the U.S. are not right now. If you look at the U.K. and the Premier League, the [TV] rights went down for the first time ever in a cycle. There are headwinds because of the stagnation of pay TV around the rest of the world that are causing rights to go up slightly, stay the same or go down slightly.

That’s the trend around the world, partly because there are no other countries that have the number of well-capitalized media companies that the U.S. has. You have Turner, you have ESPN, you have CBS, NBC, Fox, as well as potentially the big tech companies. In most of the world, you have a broadcaster and one or maybe two pay TV platforms. So in those markets, you’ll see us competing for the highest level of rights as we’ve done in Italy and Japan and Spain. Here, you’ll see us be a little more opportunistic as we grow our business smartly.

We have a bigger world to look at than just the United States, so it’s going to have to make sense for us to buy [marquee TV sports rights]. All that matters is what does it cost and what is the return on subs — what is the ARPU [average revenue per user] in that country and how does that get value at some point relative to investment, IPO or some other financial event?

It’s interesting that on one hand, Skipper seems to temper expectations for DAZN becoming a major player in the American sports media landscape given the increased competition and rights fees that go along with it. On the other hand, Skipper is making it very clear that DAZN has Sunday Ticket firmly in its sights as the deal that they are most interested in making, and that’s a deal that’s not going to be cheap (even an alternative non-exclusive package would be pricey, and an exclusive one would cost even more).

Skipper knows that to truly make it as anything more than a niche streaming company in the states, DAZN would be wise to do everything they can to partner with the NFL. While Sunday Ticket is a potential golden goose to attract new fans and subscribers to the platform, even a Thursday Night Football-like streaming deal like what that the NFL currently has with Amazon could be fruitful for DAZN if it were ever to come to fruition.

Right now , given that the content is heavily focused on boxing and the pricepoint ($19.99 per month) is higher than an ESPN/Disney/Hulu bundle, it’s hard to see where DAZN’s growth in the short term is going to come from. There’s nothing Skipper or anyone can do about that until more diverse rights start to become available. Perhaps that’s why Skipper is being so public about interest in the Sunday Ticket package and the NFL now ahead of potential negotiations down the road. DAZN wants to join the party and become a major player, but they still need a chair at the table to actually open up.