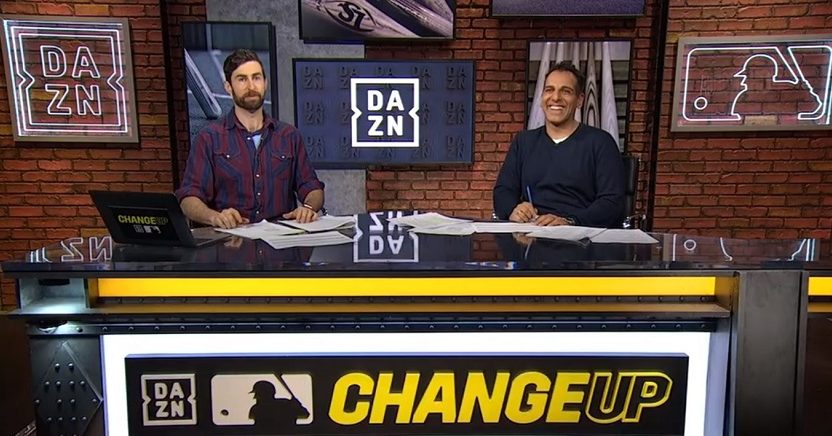 About seven weeks ago, DAZN launched ChangeUp, its MLB whiparound-style show that was the result of a three-year, $300 million deal between MLB and DAZN. I periodically checked in on the show over the last seven weeks, if only to make sure it was still a thing, and finally came across the perfect day to review ChangeUp – a weekday with a full slate of games. My opportunity to watch ChangeUp was also bolstered by the Braves getting blasted by the Cardinals on Tuesday night, giving me the opportunity to watch some baseball that wouldn’t be an exercise in pain management.

ChangeUp is broken into two chunks, of sorts – the first chunk is hosted by former ESPN host Adnan Virk and ex-HQ Trivia host Scott Rogowsky, and the second chunk is hosted by Lauren Gardner and Tony Luftman, a pair of younger hosts with energy and enthusiasm in spades. Virk and Rogowsky take the early window until about 10 or 10:30 PM ET, while Gardner and Luftman roll from then until the final game of the night ends. This gives viewers two distinct experiences while watching ChangeUp – the earlier window has more games to cover and bounces around a lot more, while the later window has fewer games, sticks with those games longer, and features far more off topic discussion.

Both chunks of ChangeUp are laid back by design. Instead of suits, dresses, polo shirts, and ties, the hosts wear casual clothing—t-shirts, sweaters, button downs, and so on. At first, it’s jarring, since we’ve been conditioned to see broadcasters on TV dressed like they’re going to a board meeting. But the hosts aren’t featured on screen all that often, and after hearing the broadcast unfold, you don’t expect to see the hosts wearing jackets.

Compared to a show like MLB Whiparound or MLB Tonight, ChangeUp takes itself far less seriously. The hosts will often be carrying on their own conversation about something tangentially (or not even) related to baseball with a game taking place on screen in front of you. The comparison that comes to mind is “watching highlights with friends,” but the main difference is that if I’m watching highlights with friends, I can actually be involved in a conversation and not just listening to them talk. It’s more like “trying to watch highlights, but people keep talking and distracting you”.

If you’re looking for analysis, like we often see nightly on the Fox and MLB Network whiparound shows (and previously on Baseball Tonight before it became a neutered shell of itself), ChangeUp is not the place to go. With no former players as part of the regular cast, there aren’t any breakdowns of plays, and the “why” of a play isn’t really covered. It sucks for those of us who like to know the thinking or logic behind certain decisions. 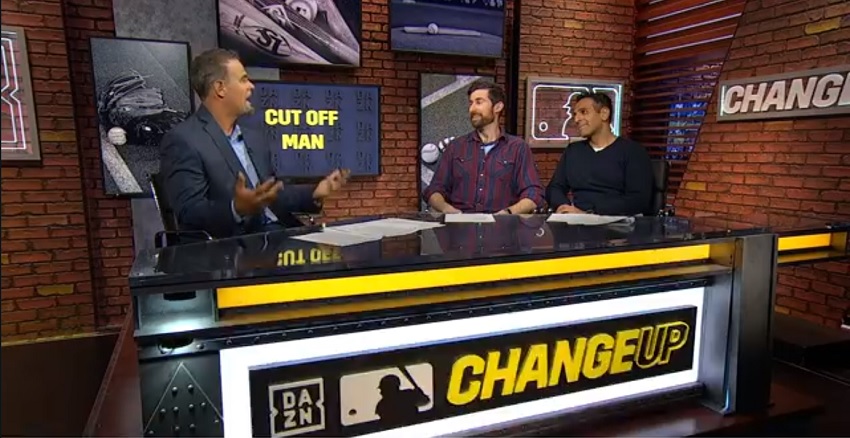 However, players do appear on ChangeUp from time to time…as interview subjects. MLB Network’s Mike Lowell was on Tuesday’s “early chunk” with Virk and Rogowsky, and while the interview was fine, it had nothing to do with the games going on at the time and there weren’t any cutaways from Lowell, Virk, and Rogowsky during the interview, minus the beginning of the Lowell segment when key games were still going on. It seemed like DAZN hit the pause button on the whole whiparound aspect of the show to talk to Lowell (or whoever the interviewee would be on a given night), and then caught up with everything that happened when the interview was over. I wouldn’t care too much if they were talking about what was going on in baseball that night, but conversations about Kevin Orie and Scott Brosius aren’t exactly relevant to what’s happening right now.

In another change from traditional studio shows, the hosts really are not shy about expressing their fandom. Gardner and Luftman were especially open about being fans of the Rockies and Dodgers respectively, and were actively cheering on their teams during the broadcast (which is definitely eye-opening in the world of everyone screaming “BIAS!” whenever someone says something they disagree with). However, it did cross the line into “over the top” territory when Luftman crawled onto the desk and beat it like a drum after a Joc Pederson home run….in the third inning. You’re at about a nine, Tony, maybe take it down to a five.

You can’t say there is a lack of passion around ChangeUp, especially in the second chunk with Gardner and Luftman. They’re clearly enjoying what they do and having fun doing it, even if they’re spending way too much time talking about Seinfeld, breakfast, NASA, and flat box furniture. But I think the non-baseball chatter makes more sense in the later window of games since there are typically only three to five west coast games per night, which naturally gives them less live action to talk about. Last night, there were four west coast (including Arizona) games, and in two of them, there was no scoring after the fifth inning. That’s a whole lot of time to fill, and I can understand why they weren’t focusing on situations that resulted in zero runs crossing the plate.

In my opinion, the host that seemed to be the worst fit was Rogowsky, who lacked Virk’s polish and the energy of both Gardner and Luftman. He was simultaneously quiet, too wordy, and his humor seemed forced. I feel like the seeds of chemistry were budding between him and Virk, but still haven’t bloomed yet, while Gardner and Luftman are firing on all cylinders. I was somewhat baffled by Rogowsky’s hire when it was revealed in March, and I’m still confused today. 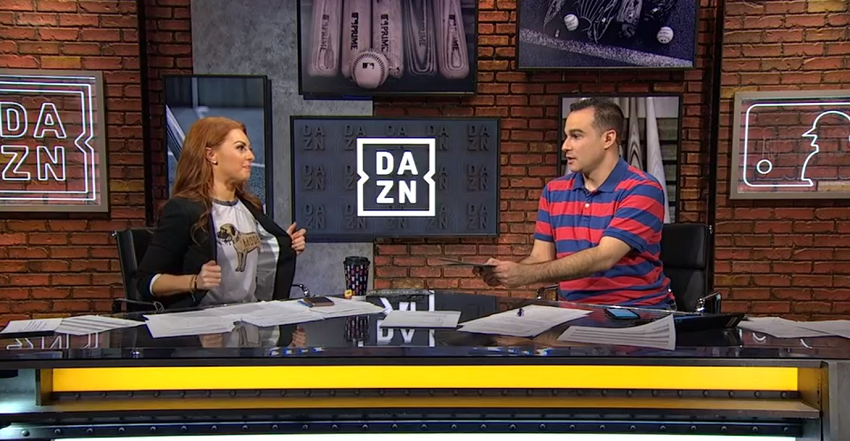 ChangeUp is a strange fit in the MLB studio show landscape. It’s only available on a subscription streaming service that airs no live games. The tone of the show seems to be geared toward younger fans, who would seemingly be more hesitant to throw down $20/month to watch live combat sports. It’s a less compelling show than MLB Tonight, but unlike MLB Tonight, it airs every night and does not get cut in length by live games. You’re not going to watch ChangeUp (or MLB Tonight, for that matter) if your favorite team is playing in primetime (and you’re not blacked out of the game). So…where’s the audience? Who is going to be watching this on a regular basis?

The answer would seemingly be “cord cutters who subscribe to DAZN,” but if you’re a cord cutter who likes baseball, you probably are subscribing to an over-the-top service like Sling or DirecTV Now in order to watch your team play every night…and depending on what provider and package you chose, you probably also have access to MLB Network and FS1 and thus, can watch MLB Tonight or MLB Whiparound.

ChangeUp seems like a proof of concept of sorts for DAZN in the American market. It shows that they can create a studio show for a major sport, geared at a specific group of fans, and the company won’t embarrass itself or the league its covering. I could see DAZN talking to (for example) the NBA, pointing to ChangeUp, and the NBA being more willing to ink a deal with DAZN because of how the show has fared so far. In short, DAZN can’t halt their continued expansion into the American market with ChangeUp – they need to use this show as a springboard into bigger and better things with various leagues in the US. If they’re unable to, DAZN’s reach will not be able to expand in this country, and their investment in Major League Baseball will go down with the worst sports media investments in recent memory.