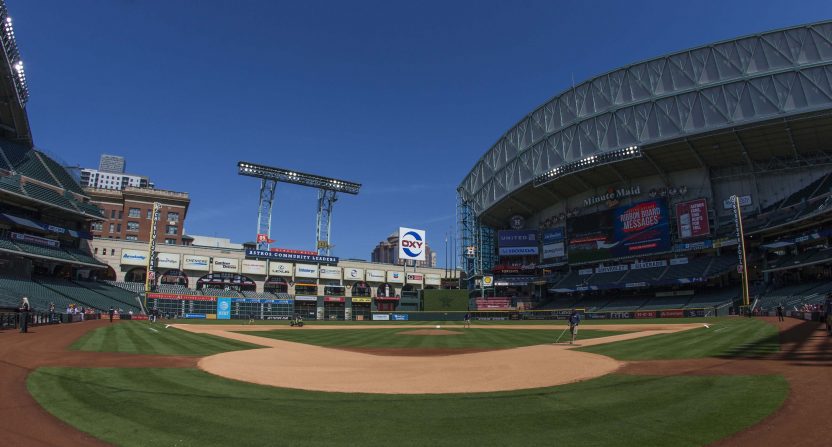 As we approach Opening Day of the 2019 MLB season, details are continuing to emerge about DAZN’s MLB live look-in show that has received some attention since it was announced back in November. The deal between DAZN and MLB was reportedly for three years and $300 million, and the whiparound style show is the crown jewel of the pact. Earlier this month, former ESPN anchor Adnan Virk was tabbed as the primary host of the show (now dubbed ChangeUp), and this week, some more names were revealed…though they’re not exactly traditional hosts or analysts.

On Monday, The Big Lead revealed that HQ Trivia host Scott Rogowsky would be working alongside Virk for three and a half hours per weeknight, from 7 PM to 10:30 PM ET. Rogowsky is apparently a big MLB fan, but has no experience as a live sports host.

On Tuesday, The Washington Post revealed that the MLB.com duo of Jake Mintz and Jordan Shusterman, better known as the Cespedes Family BBQ kids, would be hosting the weekend edition of ChangeUp, airing from 10 PM ET to midnight (it’s worth noting that there are no live games on Sunday night aside from the one ESPN Sunday Night Baseball game, which theoretically should be over by 10 PM since that window is now starting at 7 PM). The two also have no real experience as live sports hosts.

I really have no idea how ChangeUp will be formatted, if there will be any more hosts or analysts added, or what the show will look and sound like. But just days before Opening Day, I’m somewhat baffled about the talent that’s been announced. Virk works just fine as the primary host, and can probably function just as well as someone like Greg Amsinger or Fran Charles at MLB Network, and Scott Hanson or Andrew Siciliano at NFL RedZone. But no actual analysts have been announced, and the other hosts have minimal experience in anchor roles and thrive best in shorter chunks of time (as opposed to hours on end).

I’m not saying the show is going to be a disaster, because I (along with every other baseball fan outside of DAZN) haven’t watched a second of their coverage yet. I’m also not going to write ChangeUp off before I watch an episode. In fact, I ponied up my $20 for a one-month subscription to DAZN this morning, and will have a ChangeUp review in the first couple weeks of April (allowing time for the show to grow into itself, and for there to actually be a full slate of MLB games in the evening).

But for ChangeUp to thrive, it has to represent a significantly different, and superior, option to the two other MLB live look-in shows – MLB Network’s MLB Tonight, and FS1’s MLB Whiparound. ESPN relegating its MLB coverage to live game broadcasts, Sunday Night Baseball pregame shows, and occasional SportsCenter hits helps DAZN, but there are still two established competitors in the market for the eyeballs of fans not watching their team’s game in primetime.

With the announced hosts for ChangeUp, DAZN definitely seems to be trying to reach a younger demographic among baseball fans. Right now, most of the content in the MLB section of their platform is just videos from MLB.com with DAZN branding slapped on it, and for $20 a month, fans are going to need something more than a “fun” look-in show to give DAZN their money.