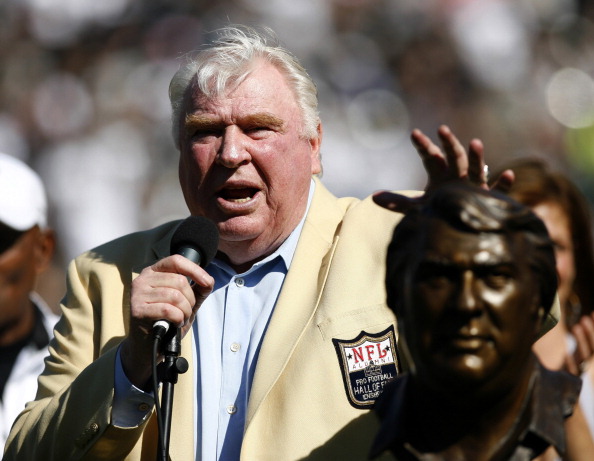 If we didn’t have John Madden, a Hollywood scriptwriter would likely have to invent him. During his lifetime, Madden excelled as a pro football coach, a broadcaster, a commercial pitchman and video game innovator. Just excelling in one of those areas would have been enough for one person, but for Madden, he was great in four different genres. Madden died unexpectedly at his home in the Bay Area Tuesday morning at the age of 85.

After a lengthy broadcast career, Madden chose to spend his retirement at home watching football rather than traveling as he did as a coach and a broadcaster. He was the subject of a recent Fox Sports documentary. It was as a broadcaster where Madden became a part of the public lexicon, but he also lent his name to a video game that is iconic to fans.

His aversion to flying became public. At first, Madden would travel to games via train, but then his TV employers would hire buses to allow him to reach his weekly destinations. The bus, which would appropriately be named the “Madden Cruiser,”  became an iconic part of the Madden vernacular, with him even donating the original one to the Pro Football Hall of Fame. Let’s take a look at some of the highlights in each of Madden’s various areas.

John Madden never had a losing season. In his ten seasons as coach of the Oakland Raiders, Madden was the youngest coach to reach 100 wins, won Super Bowl XI and only missed the playoffs twice. His teams never finished below second in their divisions. In the 1970s, his Raiders were part of some of the most iconic plays or games in league history. Whether the Raiders were on the losing end or the winning end of the plays, Madden was somehow involved. And the plays had some great names such as “The Immaculate Reception,” “Ghost to the Post,” and “The Holy Roller.”

He became the coach of the Raiders in the old AFL in 1969 and in his coaching career, guided his team to the playoffs in eight of the ten seasons.

In 1978, there was the aforementioned Holy Roller in which the Raiders pulled out a miracle win over the San Diego Chargers after quarterback Ken Stabler flipped the ball forward and Dave Casper fell on it for the winning score. Raiders announcer Bill King’s call was classic.

John Madden never got over the loss to Pittsburgh in 1972 in the AFC Divisional Playoffs which became known as the Immaculate Reception. That was when Franco Harris allegedly caught the ball after it hit the ground and scored a touchdown to beat the Raiders. At the 7:25 mark of the clip below, Madden has his famous remarks about the play, saying the referee never called a touchdown.

He coached the Raiders to their first NFL Championship in Super Bowl XI at the Rose Bowl. Here’s NBC postgame coverage, with Lee Leonard hosting and Bryant Gumbel conducting interviews. Madden would join Leonard in the NBC studio.

After retiring from coaching, Madden joined CBS Sports and became one of the most beloved broadcasters of all-time. He is the only broadcaster to work for four networks and call Super Bowls on those networks, CBS, Fox, ABC and NBC.

He was teamed with various announcers including Dick Stockton eventually partnering with Gary Bender as part of the “D” team, but CBS executives realized they had someone special and wanted to move him up to the “A” team. After a brief competition between Pat Summerall and Vin Scully to decide who to team Madden with, Summerall became Madden’s partner and they would call NFC games on CBS and on Fox from 1981 through 2001.

CBS brought in the telestrator as a tool to help Madden explain plays. Often, he would use it for other things like explaining why there was an indoor blimp for Super Bowl XXVI.

When there was a blowout, Madden would use his telestrator, then dubbed the “CBS Sports Chalkboard,” to bring some color to the game. During Super Bowl XXI as the New York Giants blew out the Denver Broncos, Madden brought out the telestrator to bring fans some insight to the Gatorade bath of coach Bill Parcells by saying there was a mother, father and baby Gatorade bucket. It was television magic. Summerall would always act perfectly as the straight man to Madden.

Summerall and Madden moved to Fox Sports in 1994, and their last game together was on Super Bowl XXXVI when the Patriots began their long dynasty by upsetting the St. Louis Rams. They wrapped up their partnership.

Right after that game, Madden elected to join ABC and Al Michaels on Monday Night Football. They would work together on ABC and NBC on the premier primetime package, MNF and then Sunday Night Football for seven seasons from 2002 through 2008. Michaels said he wished he could have worked longer with Madden.

In this video clip from 2002, Madden discussed the creation of the Turducken, during which he would award turkey legs to a deserving player on Thanksgiving. John used his hand to cut one open which caused Michaels to break up laughing.

In 2006, Madden and Michaels went to NBC to call Sunday Night Football. Their final game together would be Super Bowl XLIII. When Madden  retired from the NFL, Bob Costas narrated this tribute.

When Pat Summerall died in 2013, Madden was there to give the heartfelt eulogy.

Madden was a great commercial pitchman. He was the spokesman for Miller Lite beer, Ace Hardware, Tinactin, Travelways Bus Lines and so many vendors. It was his Lite Beer ads that showed that Madden wasn’t just an intense guy on the sidelines and it was here where he showed a sense of humor that was absent when he was a coach.

After he became known for his fear of flying and taking trains to the NFL on CBS assignments, Madden did this Miller Lite ad playing on aversion to planes.

Did you know Madden hosted Saturday Night Live? It’s true. In 1982, Madden hosted SNL after a Super Bowl so he took a train to New York. Madden discussed his fear of flying and why he chose to take trains in his early part of his broadcasting career. He also told a story on how he lost four of his players prior to Super Bowl XI in 1977.

In 1988, Madden lent his name to the Madden NFL video game and it will outlive him for generations. NFL players have grown up playing the game and it has sold more than 250 million copies since its creation.

Madden said that when he was approached to create the game, he wanted it to be an educational tool for fans and a way for then to test out plays. Originally known as “John Madden Football,” EA Sports put out the game annually adding the year to the title in 1992.

Madden was the original announcer on the game and would be joined by Summerall and eventually Michaels, but left commentary in 2008.

There are millions of fans who continue to play the game and there are Madden tournaments which are played by gamers all over the world. Players may not know how or who created Madden now, but his legacy with gamers will last for years to come.

Here’s a story on the creation of the Madden game on the old G4 network.

Madden’s legacy in coaching, broadcasting, gaming and commercials is well established. If he had just a legacy in just one of those categories, John Madden would still be well-known, but the fact he spans so many genres shows that he had not just a well-rounded life, but also a hand in many areas.

Madden’s sudden passing was a shock to many. And there will undoubtedly be many tributes to him throughout the next weeks.

[Photo from Robert B. Stanton/NFLPhotoLibrary]