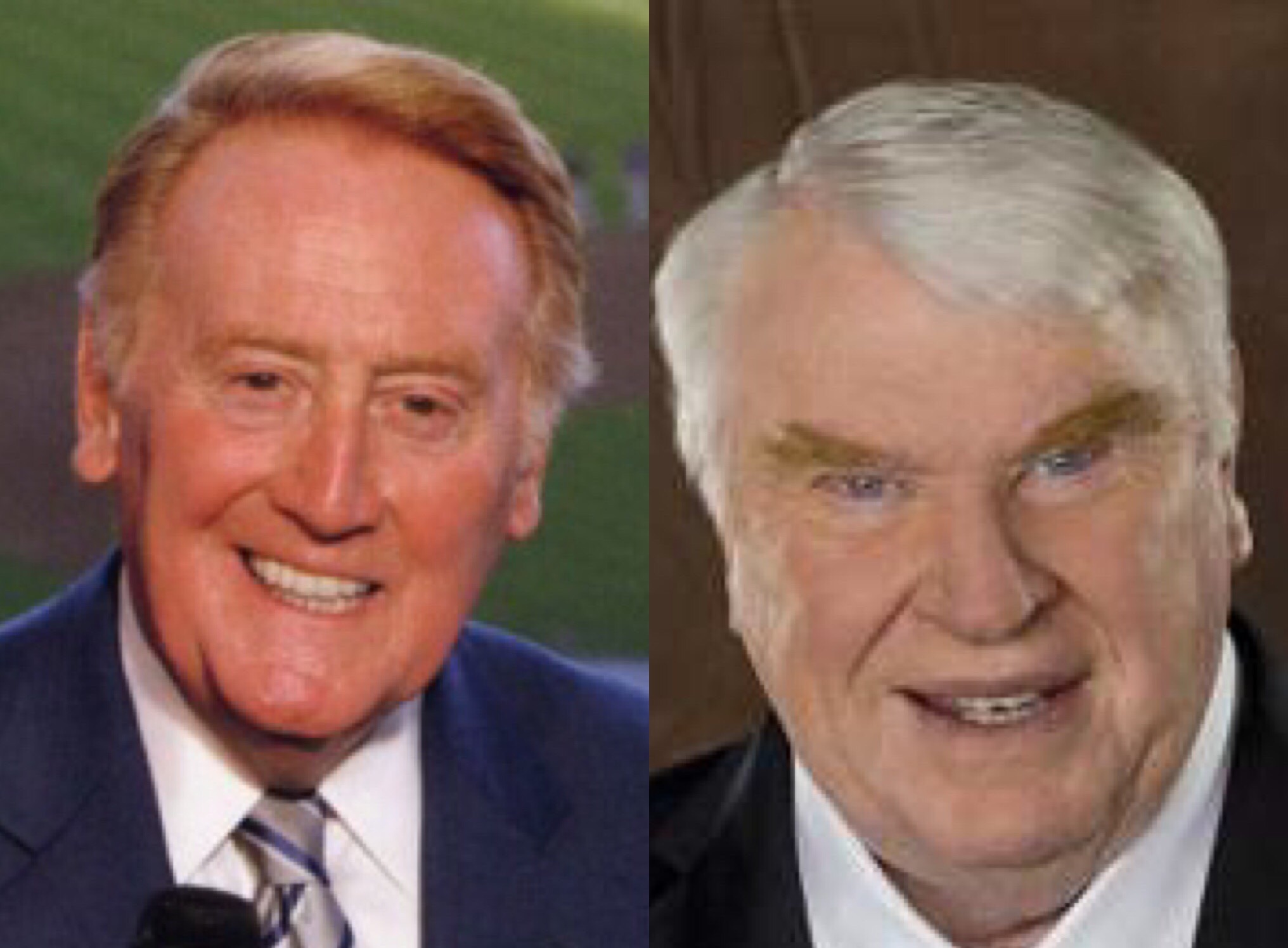 Can you imagine Vin Scully and John Madden becoming the NFL on CBS “A” team and perhaps the NFL on Fox’s main announcing team? It almost happened.

Back in 1981, CBS decided to shake up its NFL announcing crews. John Madden had joined CBS in 1979 and the network knew it had a gem in the former Oakland Raiders coach so it wanted to elevate him to the “A” team in place of Tom Brookshier.

However, the question was who would become his partner? Would it be Pat Summerall who had been on the “A” team with Brookshier or would it be Vin Scully who had been calling regional games? Scully joined CBS in 1975 and was calling golf, the NFL and a trash sports competition called “Battle of the Sexes” which he co-hosted with Phyllis George of the NFL Today. In the process, he had reduced the number of games that he was calling for the Los Angeles Dodgers in order to raise his national profile.

Scully had then-CBS Sports president Van Gordon Sauter in his corner. NFL on CBS Executive Producer Terry O’Neil was lobbying for Summerall. But instead of naming a permanent partner, O’Neil convinced Sauter to delay a decision until Week 9 of the 1981 season. So Scully would work with Madden for the first four weeks of the season while Summerall called U.S. Open tennis and then partner with Hank Stram. Then from Weeks 5 through 8, the partners would be switched, Summerall with Madden and Scully with Stram.

O’Neil admitted to the New York Times’ Rob Weintraub this was not the way to treat two men who would become legends:

“I knew it was no way to treat two guys on the way to the Broadcasting Hall of Fame,” O’Neil said. “We tried to camouflage it in the press — the new kid, being me, needs to see the personnel at work, that sort of thing. But it inevitably took on the feeling of a face-off for the role. I belatedly realized there was going to be a loser, and it would be awkward.”

During Weeks 5-8, it became apparent to O’Neil and other CBS Sports staffers that Summerall would make a better fit with Madden. The only thing was to get Sauter to sign off.

“He could have brute-forced it on me if he wanted to,” O’Neil said. Instead, the young producer persuaded the hirsute executive to convene a straw poll, including votes from a half-dozen other CBS Sports lieutenants. Just before Halloween and just after that lunch in the CBS executive dining room, the brass voted one by one for Summerall.

Sauter went around the table, O’Neil said, saving him for last. O’Neil recalled the moment: “I began to agree with the rest of the guys — ‘Well, not to echo what’s already been said, but. …’ — that sort of thing. Before I got any further, Sauter slammed his fist down on the table, rattling the china. ‘I know what you think!’ he yelled.”

Sauter realizing that he was outvoted decided to make the Summerall-Madden team permanent thus beginning one of the greatest partnerships in sports television history. They would go on to work Super Bowl XVI in Pontiac, MI and continue their partnership on Fox Sports into the 21st Century before Madden joined Al Michaels at ABC in 2002.

The next thing for O’Neil was to inform Scully of the decision and how he handled it remains one of his biggest regrets. At the time, O’Neil was 31, one of the youngest executive producers to lead a sports property. So instead of coming right out and telling Scully, who was calling the 1981 World Series for CBS Radio, he attempted to do an end-around:

O’Neil tried some ham-handed spin, telling Scully he had “good news.” Scully would be working the rest of the season with Hank Stram, and would call a pair of playoff games, including the N.F.C. championship game. He left out that the Super Bowl would be called by the winner of the competition, Summerall, who went on to work with Madden for the next 20 seasons (moving together to Fox in 1994).

Of course, Scully read between the lines and did not see it as good news, in fact he got mad at O’Neil and it led to him eventually leaving CBS for NBC at the end of 1982. And he did call the aforementioned 1982 NFC Championship Game which would be his last football game:

Scully would call one more Masters for CBS and one more World Series on CBS Radio before departing for the Peacock in 1983 where he would call his main sport, baseball and golf through 1989.

According to O’Neil’s 1989 memoir, “The Game Behind the Game,” Scully told CBS management that the two huge factors in his decision to leave were losing the bake-off to Summerall and the “good news” phone call from O’Neil.

Scully’s hire at NBC would displace Dick Enberg who was told he would be the main play-by-play man for baseball, but was given a huge raise by NBC to offset his disappointment, but that’s another story for another time.

As they say, when one door closes, another door opens and that was certainly the case for Scully who certainly didn’t look back when CBS chose Summerall over him for the NFL. But it’s interesting to think what might have happened. Would Summerall have moved to another network, perhaps NBC or ABC? Would Scully have become more familiar to fans for football than being the Voice of the Dodgers? And might Scully have called baseball on CBS from 1990-93?

The point is all moot and as Scully retires as Voice of the Dodgers after this season, he would probably tell us that everything worked out well in the end.